From the 5th to the 9th of October, I attended the "Festival International de la Bande Dessinée d'Alger".
Here is a wonderful account of the event taken from Lebanese cartoonist Joumana Medlej's blog.

As my flight landed the evening of the opening of this 4th edition of FIBDA, I missed that again, and would only reunite with my fellow comickers over breakfast the next day. Fortunately, my friends from Armenia, Agata Baldayan and Irina Mryan, found me at the Rome airport as we were on the same flight to Alger from there, and that was a happy reunion!
As an aside, any airport that has a Fabriano shop and whose announcements include "The Holy Mass will be celebrated in terminal 1 at 12:30" is worth the detour.

Just so you know, this post won't cover everyone who was there nor all the events, as there was too much going on these 4 days for anyone to catch. A partial(!) list of guests can be found on the FIBDA site.


Early the next morning I began discovering who had returned to the festival: Hector Sonon from Benin, Manuel Picaud, Maximilien Leroy, Brandon Jerwa (currently making a film, Untold Tales of the Comic Industry) with plenty of backup this time as I would find out later, and Laurent Melikian, fellow early lark, whom I'd also met in Armenia and highly encouraged to meet me again in Algeria. I was also delighted to see Paul Gravett had made it there, who had attempted to come last year but had the same visa problem I had (i.e. we never applied for one!) except I'd slipped through the net – not that I recommend anyone try that stunt...

After the first conference, regarding the role of comics in peace and reconciliation in Africa (which sounds more promising than it is, sadly,) I met the rest of the American contingent: Paul Benjamin (who writes for a bunch of titles and games out of Uzbekistan, believe it or not), John Layman (whose current series Chew has now hit the bestseller list) and Steve Lieber, the artist of the bunch, of Whiteout fame (among others, and his latest book Underground looks awesome) who spent the festival drawing for everybody present while the rest of us tried very hard to get to people's sketchbooks before he did.
I was very amused that the US paid for their trip and accordingly put them to work teaching in schools and kept an eye on their movements. My opinion alone, but to me it was strangely reminiscent of -- oh, never mind.

Every morning Steve would come down to breakfast early with what is best described as a camper's backpack, except instead of a sleeping bag and dried fruits and nuts, it contained original pages, art supplies and dried fruits and nuts. Someone had done his homework and read my food review on last year's blog entry!
As for the trio, hanging out with comic writers means bathing in snappy dialogue. I laughed a lot. I won't repeat the things that made me, because I want to stay friends...


Native Maqari, American Nigerian living in Paris as far as I could make out, was completely insane and had us all picking up our jaws within a few minutes of sitting down. He didn't sketch but drew directly in ink using bits of wood (making it look like the wood was alive and would keep drawing on its own if he let go of it), a technique, he said, he picked up from the calligraphers he trained with, and that aspect of his work was no less astonishing (see him at work here). As for my own calligraphy, which I was often sketching for, he claimed it was unquestionably "graffiti", which all things considered was probably a great compliment.

Another outrageous old friend was the inimitable Pahé, back to terrorize Algiers once more, as demonstrated by this cartoon he drew for me. He did give me a chance to request something tamer:
- Joumana, je te fais du Pahé?
- Vas-y, lâche-toi!

I was impressed that Pahé had not only completed and published his book about Gabon president Ali Bongo (titled Ali 9, Roi de la République Gabonaise, no less), but also that, instead of being harrassed or arrested for it, he was invited over to the palace and the President, now a fan, wrote a foreword for the next edition. And I thought politicians as a species had no sense of humor!

I was looking forward to hearing Benoît Peeters speak again as I'm a big fan of his work both in comics and about them. The conference, a sort of biography of Tintin via Hergé and vice-versa, was one I already attended in Beirut in 2009 but well worth hearing again (at the time I wrote a full account of another talk he gave the same day.)

A little later, it was Paul's turn to speak, presenting a panorama of the best graphic novels in history through his soon-to-be launched book, 1001 COMICS You Must Read Before You Die. When I say soon-to-be launched, I meant very soon, as he flew back to London the very next day
for the release! It was an enticing talk and several of us took advantage of the presence of an advance copy to dive right in.


Peeters gave another talk that evening, this time with his lifelong creative partner François Schuiten, and together they plunged us into the world of the Cités Obscures (Cities of the Fantastic) which they created, one of the most memorable (and highly non-linear) series in franco-belgian comics. 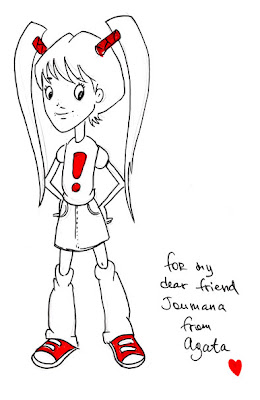 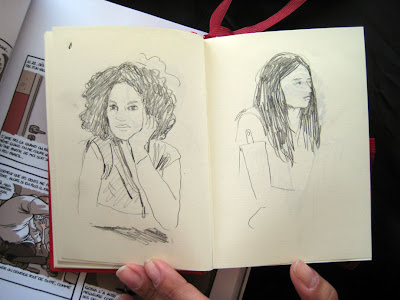 On Saturday morning, someone from Marvel comics was supposed to give a talk, but he didn't make it so Laurent took over and presented a history of superhero comics (a smaller version of which had been presented in Armenia), starting in the US then moving on to superheroes worldwide, ending with the latest title which was my own Malaak. Brandon, Steve, Paul, John and I then sat to answer questions, which took a whole hour: to our delight and despite the rain, the conference room was packed with young (and older) readers very eager to have a chance to get answers straight from the horse's mouth. There was one moment of sad cultural difference when, asked a barrage of questions all at once, Paul answered "42!" and us panelists were left cracking up while the audience looked on blankly...
I had a signature scheduled for Malaak IV as well, and I was touched to see that some people remembered me from last year. Also signing were two contributors of Toktok, a new comic magazine from Egypt of serious quality that I was glad to discover. Then, free of obligations, I sat to do the traditional portrait sketching of visitors. People line up and you draw quick portraits of them until you're too tired to carry on. It strikes me as a very useful and very important exercise in facial features: you will learn more about differences in physiognomy, eye and nose shapes, hairlines, etc from an hour of such sketching than from anything else. And it makes people happy. Also, I was armed this time with a really big black marker (that had been used for the cartoons below) and I never knew that the pressure of having no room for mistakes would pull accurate portraits out of me. Another good exercise.

Finally I'd like to mention the revelation of the festival, to me: Daniel Bosshart and his astonishing trilogy. He was so kind to give me a copy of the second volume, Alberto, for which I am ever so grateful as the series is for now only published and distributed in Switzerland (by Edition Moderne) and it will be a crime if nobody out there picks it up to make it available worldwide! These 3 books took altogether 15 years to create and they're entirely wordless. All is expressed is the astonishingly detailed, slow unraveling of the characters' inner life through changes in their surroundings, either real or imagined. There's no need for me to say a lot, I'll just share a couple of spreads. 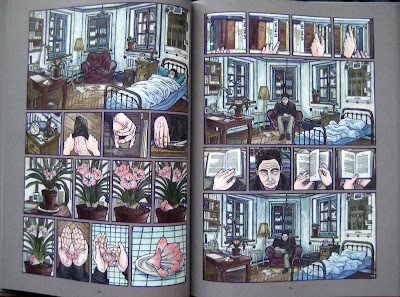 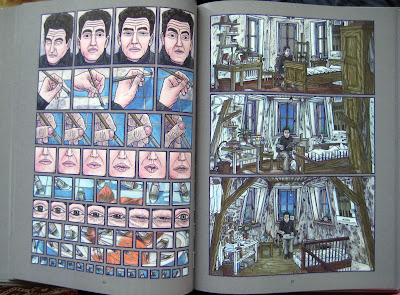 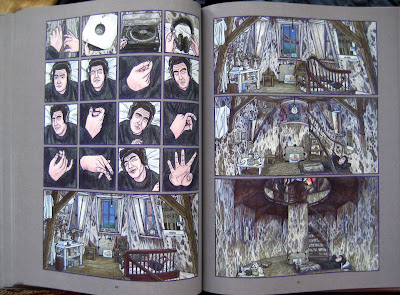 Observe how every one of the myriad details in each room transforms, how every movement is observed fully. There is so much love in this work! Daniel promised me he'd look into getting a website up with his art, so it can get out there. I'm sure he could even offer some pages enlarged as posters.

And to finish this FIBDA blog, a surprise! I was wondering why a couple of people had asked me if Malaak had Algerian connections, and I found out why: 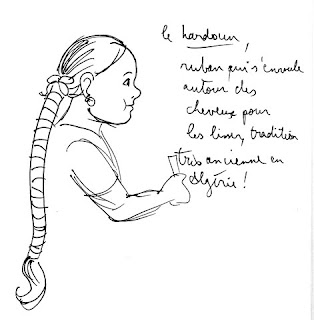 The kardoun is a long ribbon that is wound tightly around the hair to straighten them, a very old Algerian tradition. That is absolutely awesome. I have now witnessed the real-life version of something I wasn't sure was physically possible XD
Login