From the "Comic Riffs" blog.

Editor Bob Mankoff lets us peek behind the scenes

By Michael Cavna
There's a reason the stock Grim Reaper character has been granted eternal life in the form of cartoon after cartoon.

Because comedically, in the right hands, it “kills.”
“For a spread like ‘Grim and Bear It,’ which features the Grim Reaper, we call out for cartoons on that theme,” Mankoff, the cartoon editor at The New Yorker, tells Comic Riffs. “We picked the ones we like best from about 300 of those.”
Mankoff is describing the behind-the-scenes process of culling and curating The New Yorker’s annual Cartoon Issue (now on newstands and online). The issue offers not only an A-list collection of “funnies,” but also featured cartoons by such top talent as Barry Blitt, Roz Chast, Emily Flake, Zachary Kanin, Marc Rosenthal and Mark Alan Stamaty. 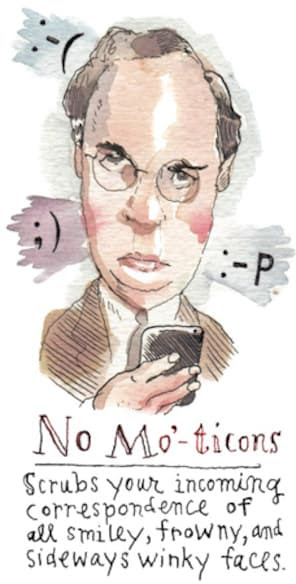 From “APP HAPPY” by Barry Blitt. (BARRY BLITT / courtesy of The New Yorker)Here, for once, is a periodical you can judge by its cover: The Cartoon Issue invites from its very front with a wall-worthy George Booth illustration: A vampire and his sharp-toothed kitty sit together to dine over matching bowls (one containing a milky liquid, the other a decidely more crimson shade).
“The Booth cover is great. Who knew that Vampires had quirky cats as pets that they enjoyed an evening repast with?” Mankoff tells us, noting that Francoise Mouly commissioned the cover. “George Booth, of course.”
Toward the front, the issue also features a politics-themed cartoon by Mankoff himself, captioned: “Electomercial.”
“The ‘a-ha’ part was thinking of the term ‘Electomercial,’ “ the cartoon editor tells us. “Once I did that, I just needed to mash up the idea of the pandering promises [that] TV-campaign ads make with the ridiculous hype of infomercials — and fine-tune the caption till it tied the two together.”
Mankoff’s goal with such cartoons, he says, is “as old as satire: ‘to laugh folly out of existence.’ Hasn't worked so far, but it doesn't hurt to keep trying.” 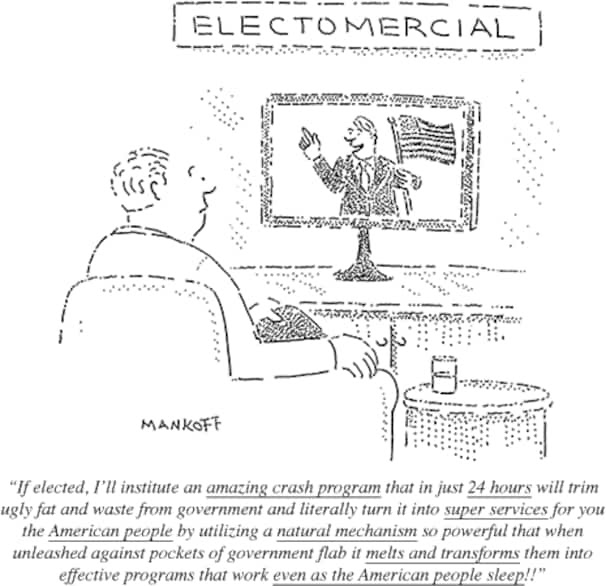 The editor says he sees “about a thousand cartoons a week” — 400 to 500 of those submissions coming from “the regulars.” The Cartoon Issue’s “Funnies” spread was compiled from some of those weekly offerings.
(Mankoff notes that there were a wealth of “Occupy” movement cartoons submitted — “some of which I’m sure you’ll be seeing in upcoming issues.”)
Among the striking “Funnies” cartoons is a meta-gag by J.C. Duffy, whose comic breaks less the “fourth wall” and more the “third panel.” ”We actually don’t do too much meta-humor,” Mankoff says, “but when we do, I like to think our meta is betta — which I think the Duffy cartoon is.”
Chast gets a two-page spread to narrate a New Yorker’s bent take on traveling through the American West, in “Scenes From a Vacation.” “She often does suggest taking on this type of cartoon reportage,” Mankoff says, “in which we see the world through her eyes, which skews reality just a bit to make it funny.” 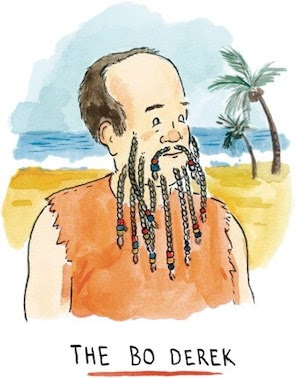 from "Beards of the Future" by Emily Flake (EMILY FLAKE / courtesy of The New Yorker)Stamaty (late of "Washingtoons") delivers an engaging autobiographical comic titled “A Cartoon Legacy,” which conveys in part how he “inherited” cartooning from both his mother and his Ohio father, who — under doctor’s orders — sought “a sedentary profession.”
“Mark isn’t one of our regular cartoonists, but I’ve known and admired him for a long time, going all the way back to his MacDoodle street strip in the Village Voice,” Mankoff tells us. “His piece about growing up in a family where both his mother and father were cartoonists, and how he at resisted this legacy — wanting to be thought of as an ‘artiste’ — but eventually [coming] to embrace it — I thought was perfect for the Cartoon Issue.
“And, he showed himself to be real ‘artiste’ on this spread by managing to make a very dense and text-dependent story also graphically interesting.” 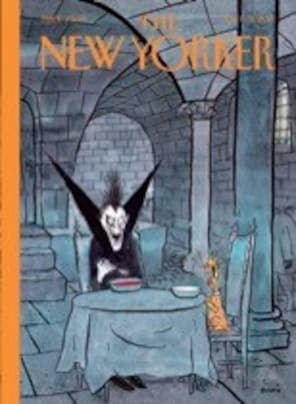 The Cartoon Issue cover. (GEORGE BOOTH / courtesy of The New Yorker)As for Blitt, the frequent New Yorker cover artist offers a witty cartoon about offbeat would-be iPhone apps that reads like an “insta-classic.” “Barry has the perfect blend of art and ideas, which we mostly see on his covers — which usually have some political message,” Mankoff tells us. ”I really like the idea of him branching out more into the realm of social commentary, which he does here.”
And then there is a fitting tribute to longtime New Yorker cartoonist Leo Cullum, who died last year. A “Menagerie” of some of his distinctive animal cartoons is just the right touch.
“Leo died almost exactly a year ago, when the last Cartoon Issue came out,” Mankoff says. “It was a great personal loss to all who knew him because he was such a fantastic guy. And also a great loss to cartooning because he was such a fantastic cartoonist.”
Mankoff recently contacted Cullum’s widow, Kathy, and they thought up the theme spread that we see; then Kathy and New Yorker cartoonist Alex Gregory culled a hundred of Cullum’s animal cartoons.
“We could never publish all the wonderful cartoons Leo submitted – about 10 every week,” the editor says. “You always had to select one or two among many other good ones. So I knew that there many other good ones that no one had ever seen.”
The eclectic range of cartooning styles and comic tones makes for an especially entertaining Cartoon Issue. Still, Mankoff maintains that it is not the magazine’s most popular theme-issue of the year.
“I certainly look forward to it and I know our readers do as well,” Mankoff says. “But it’s probably not as popular as the Food Issue, which of course has the advantage of being edible.
If you like true cartoon wit: Bon appétit!