Here is a wonderful caricature by my good friend Fred Sebastian published in today's Toronto Star. 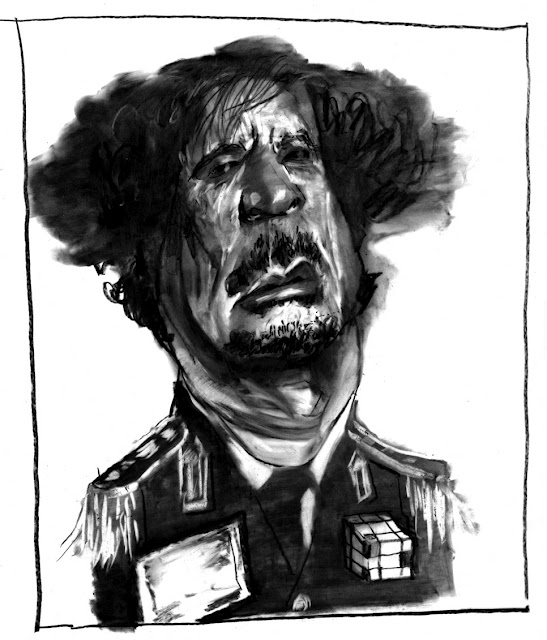 
Down in the basement, I still have a copy of Moammar Gadhafi’s bizarre political manifesto, The Green Book, which I picked up during a trip to Libya in the early 1980s. It’s a reminder of what an oddball dictator Gadhafi was — and of how he nevertheless managed to defy and bedevil the Arabs and the West until the hour of his death Thursday.
With Gadhafi’s demise, it’s a good time to assess the larger Libyan policy. A White House team has been studying since March what to do “the day after” the leader was gone, and happily, most of the potential disasters they worried about haven’t happened. “A lot of the things we were planning for — massive insecurity, Baghdad 2003 — we haven’t had to deal with,” says a White House official involved in the effort.
Without Gadhafi’s galvanizing presence, the role of sect and tribe may yet increase in Libya, just as happened in Iraq after the secular state structure there was decapitated. But today, NATO’s war in Libya looks like a success — and for some interesting, contrarian reasons.
What was good about President Barack Obama’s cautious, back-seat approach to Libya was that it denied Gadhafi the final apocalyptic confrontation that he craved with the United States. Sorry, Moammar, but America was just part of a NATO coalition this time. Indeed, the denouement in Libya has been a good argument for halfway measures (or at least, half-visible ones).
This was an instance when Mr. Cool had it pretty much right. Obama saw that a no-fly zone wouldn’t be enough and lobbied for tougher UN language authorizing “all necessary measures” to protect the Libyan people. But he opted for limited U.S. involvement, front-loaded in the first week, and under the protective cover of NATO and the Arab League.
Obama deliberately kept the U.S. in the background even when critics began howling for a show of American “leadership.” And most important, he was patient through last summer, rejecting the counsel of those who argued that he must escalate U.S. military intervention to break the stalemate or, alternatively, bail out.
Gadhafi was a threat to his own people but he never posed a strategic danger to the United States. He was mostly a nuisance and a crank, as documented in The Green Book, which announced on the opening page that it was “the final solution to the problem of the instrument of governing.” No, that didn’t mean gas chambers but a network of popular committees that was supposed to turn Libya into an Arab version of Vermont.
“Representation is fraud,” Gadhafi wrote, and parliaments were part of an “obsolete theory.” Instead, he proposed to govern Libya like the ringleader of an anarchic circus, with himself dressed in outlandish uniforms that, variously, made him look like a character in Star Wars or the leader of a bouzouki band. His capricious experiment only made tribal power more important.
“A nation is a tribe which has grown through procreation,” Gadhafi opined in his manifesto. But that was just the problem. Gadhafi’s Libya wasn’t one tribe, but many; the same is true for most of the nearby nations that are now caught up in the Arab Spring.
What Libya needs now is “nationhood,” which isn’t as simple as it sounds. The secular states that emerged in the Middle East after the Ottoman Empire were mostly military dictatorships parading under the banner of Arab nationalism. Yet they were founded on something larger than tribe or sect — the idea of a transcendent Arabism that had room for Christians, Druze, Alawites and the rest. Indeed, you can argue that the history of the Arab world over the past century has been a search for some such organizing principle as an alternative to the Sunni caliphate.
Creating a strong secular state is the big challenge for Libya, post-Gadhafi. The ruling National Transitional Council will become an interim government as soon as “liberation” is officially declared. Job Number 1 is forging a single national army from the bands of militias that fought the revolution. On the governance front, several hundred foreign advisers will be working under UN special representative Ian Martin. This time, nation-building will be a UN headache.
Obama took a lot of shots along the way to Thursday’s symbolic end of the Libya campaign.
But it seems fair to say that his vision of opposing Gadhafi through a broad, international coalition — in which other nations share the burden, for a change — worked out pretty well.
David Ignatius writes on international affairs for the Washington Post.
davidignatius@washpost.com.
Published by Bado at 6:28 AM