From The New York Times archives. 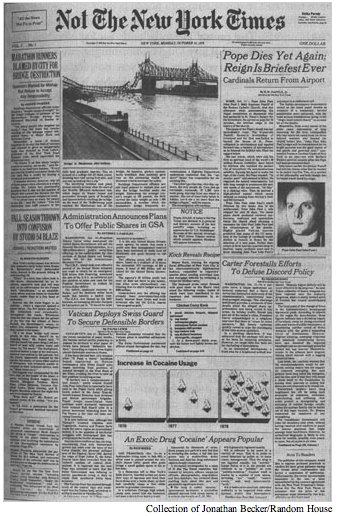 The modern standard for fake news was set in October 1978, with the publication of the one and only issue of Not The New York Times. It was a pitch-perfect replica, spiritually and physically. At that point, the actual newspaper had not been published for two months because of a strike, and the Internet did not yet exist.

After so long without the real thing, the public embraced Not The New York Times —from the first page to the last, packed with articles that were vaguely familiar. For instance, while there was no Living section with features on home decorating, there was The Having Section, which had handy how-to stories like “Insulating With Pâté: Winter Warmth With Good Taste.”

“An Exotic Drug, ‘Cocaine,’ Appears Popular,” read one headline, deploying quotation marks around the word cocaine like a pair of tweezers. In keeping with the real newspaper’s expanding use of graphs to convey important facts at a glance, the cocaine article included a chart on its increased consumption, illustrated with little noses along a timeline. The trend was unmistakable: In 1976, one nose sufficed; by 1978, a full 15 noses were needed.

Of course, the most pressing issues of the day received the greatest attention. For instance, in real life, Pope Paul VI died in August of that year. His successor, Pope John Paul I, died 33 days after he was elected. The lead story in Not The New York Times reported that John Paul’s successor — John Paul John Paul, formerly the archbishop of Liverpool — lived only 18 minutes after his investiture.

“Pope Dies Yet Again;
Reign is Briefest Ever
Cardinals Return from Airport”

Having already picked two popes that summer, the article reported, many of the cardinals were fed up with their accommodations at the Vatican and so “were said to favor choosing John Paul John Paul’s successor in a conference call.”

In local news, a tragedy dominated the headlines: the Queensboro Bridge had collapsed under the weight of 10,000 runners in the “Rheingold Marathon.” The organizer of the race, Fred Lebow, said it was not his fault, but that of the runners. “I’ve never seen so many fat people in my life,” said the story’s Mr. Lebow. “You will remember that 5,026 runners in the field held graduate degrees. You sit around at a college for all those years, drinking beer and eating fruit pies, and you end up looking like a pig.”

Just like the real newspaper, Not The New York Times carried rich reports from correspondents around the world — “Sleepy Village’s Dull Anecdote is Grist for Reporters’ Mill” and “Rudolf Hess Riots in Spandau Prison” — along with a lively opinion section, under the lead editorial, “Whither Détente?”

Not The New York Times was masterminded by Christopher Cerf — a man of many talents, none mightier than as the composer of such “Sesame Street” classics as “Put Down the Duckie” — art director Michael Gross and the writers George Plimpton, Freddy Plimpton, Rusty Unger and Tony Hendra, who posed for the front-page picture of the short-lived pope from Liverpool. Among the contributors were Carl Bernstein, Frances FitzGerald, Michael Arlen, Jerzy Kosinski, Terry Southern and Nora Ephron.

“Frankie Fitzgerald called me to come over one night,” recalled Kevin Buckley, who had been a correspondent in Vietnam for Newsweek and was then the editor of New Times. He conjured an op-ed column in the manner of the longtime columnist James Reston, an interview with Genghis Khan — “not such a bad fellow” — that had originally appeared in October 1241 and was being rerun as the author’s favorite. It evoked a conversational tone with the powerful. “ ‘How are you, Scotty?’ asked the Khan, gnawing on a Kurd.”

This was all accomplished not only before the Internet, but before computers.

“I just remember being there that one night in a room where everyone was off in their own corners, typing madly,” Ms. Ephron said.

And what is this “typing”?

“If you need me for anything else, I’ll be useless,” Ms. Ephron said, signing off.
Published by Bado at 4:00 AM