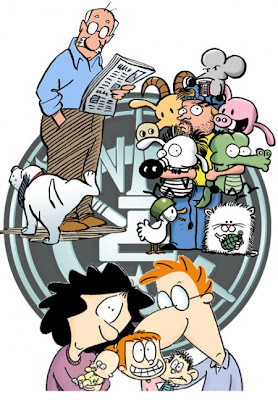 NCS membership nomination voting has been tabulated, and the nominees for the 2012 Reuben Award for “Outstanding Cartoonist of the Year” are: Brian Crane, Rick Kirkman and Stephan Pastis

Brian Crane is the creator of Pickles, a daily comic strip syndicated by the Washington Post Writer’s Group. Soon after Pickles’ debut in 1990, Brian “retired” as an art director for an advertising agency in Reno, Nevada, to devote his full attention to his comic strip. Although he often used cartoon figures in ads he designed, Pickles is his first syndicated comic strip. In 1995 and 2001, Pickles was nominated for Best Newspaper Comic Strip by the National Cartoonists Society, winning the coveted award in 2001. Pickles has topped comics polls across the nation again and again, and it appears in over 800 newspapers around the world. Brian lives near Reno with his wife, Diana. He’s the proud father of seven and grandfather of 11. This is his third nomination for the Reuben. Visit the Pickles website.

Rick Kirkman is the co-creator of the daily comic strip, Baby Blues, syndicated by King Features Syndicate. Prior to Baby Blues, Rick was a freelance humorous illustrator for national advertising and magazine clients. He and partner Jerry Scott initially based Baby Blues on Rick’s family. Creators Syndicate released the strip January 7, 1990. It now has 1200 newspaper clients in over 900 cities worldwide. The strip has been published in over 30 anthologies in the U.S., and many more in other languages, and became a TV series on the WB network. Baby Blues won Best Newspaper Comic Strip from the National Cartoonists Society in 1995. Rick lives with his wife, Sukey, in Arizona with a bunch of cats and dogs, and the kids are grown and having adventures of their own. You can visit the Baby Blueswebsite here.

Stephan Pastis is the creator of the daily comic strip Pearls Before Swine, syndicated by Universal Uclick. Stephan practiced law in the San Fransisco Bay area before following his love of cartooning and eventually seeing syndication with Pearls. Launched in newspapers beginning December 31, 2001, the daily strip currently appears in 650 newspapers worldwide. The National Cartoonists Society awarded Pearls Before Swine the Best Newspaper Comic Strip in 2003 and in 2006. Stephan also recently released an interactive app called Only the Pearls. Stephan lives in northern California with his wife Staci and their two children. This is his fifth nomination for the Reuben award. Visit Stephan’s blog and the Pearls Before Swine website.

The official ballots have been issued to all full members of the National Cartoonists Society for voting to determine the winner. Congratulations to the nominees!

The winner of the 2012 “Outstanding Cartoonist of the Year” will be announced on May 25th at the annual NCS Reuben Awards dinner in Pittsburgh, PA.