Shawn Jeffords in The Toronto Sun.

Toronto Sun legend Andy Donato can add a new accolade to his already impressive list of accomplishments.Donato will be inducted into the Italian Walk of Fame on May 28 with a special ceremony and celebratory dinner.

The editorial cartoonist’s work has graced the pages of the Toronto Sun since 1971. Jimi Bertucci, co-founder of the Italian Walk of Fame, called Donato a Canadian icon.

“He has had a tremendous impact on Canadian culture,” he said. “We feel really honoured he’s part of our community.”

Donato, a National Newspaper Award winner, said he “just about fell on the floor” when he heard the news of his induction. “I’m very proud of my Italian roots,” he said. “I always have been. It’s just a great honour that they recognize this.” 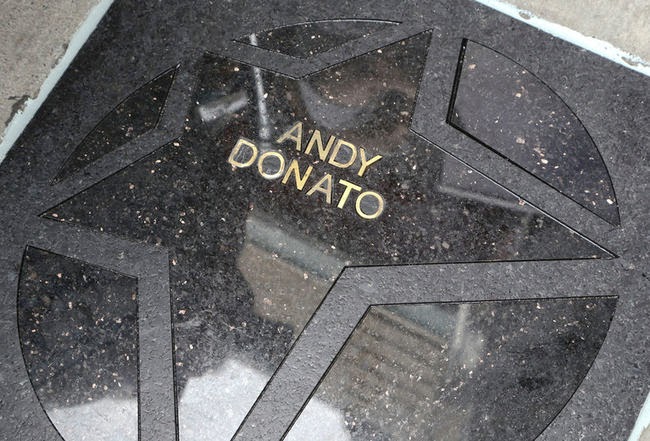 In fact, Donato’s connections to Little Italy, where the walk of fame is emblazoned on the sidewalk, are strong.

His mother was born there, and his father and uncle lived in the area at one time. Donato spent much of his youth in the Bathurst-College Sts. area.The Italian Walk of Fame is located on College St., just west of Clinton St.

Donato will be inducted into the Walk of Fame by Toronto Sun publisher Mike Power. “The Sun Family couldn’t be happier for Andy,” Power said. “It’s a well-deserved honour. He’s been such a big part of the Toronto Sun’s success and has been one of the top editorial cartoonists in North America for decades.”

The class of 2014 will also include singer Gino Vannelli and actor Joe Mantegna.

Established in 2009, the Italian Walk of Fame doesn’t just restrict itself to Canadians. Previous inductees include Dean Martin, Armand Assante and Connie Francis.

“We just thought Andy was the perfect person for this,” Bertucci said. “This is definitely someone with Italian roots. He’s contributed so much.”