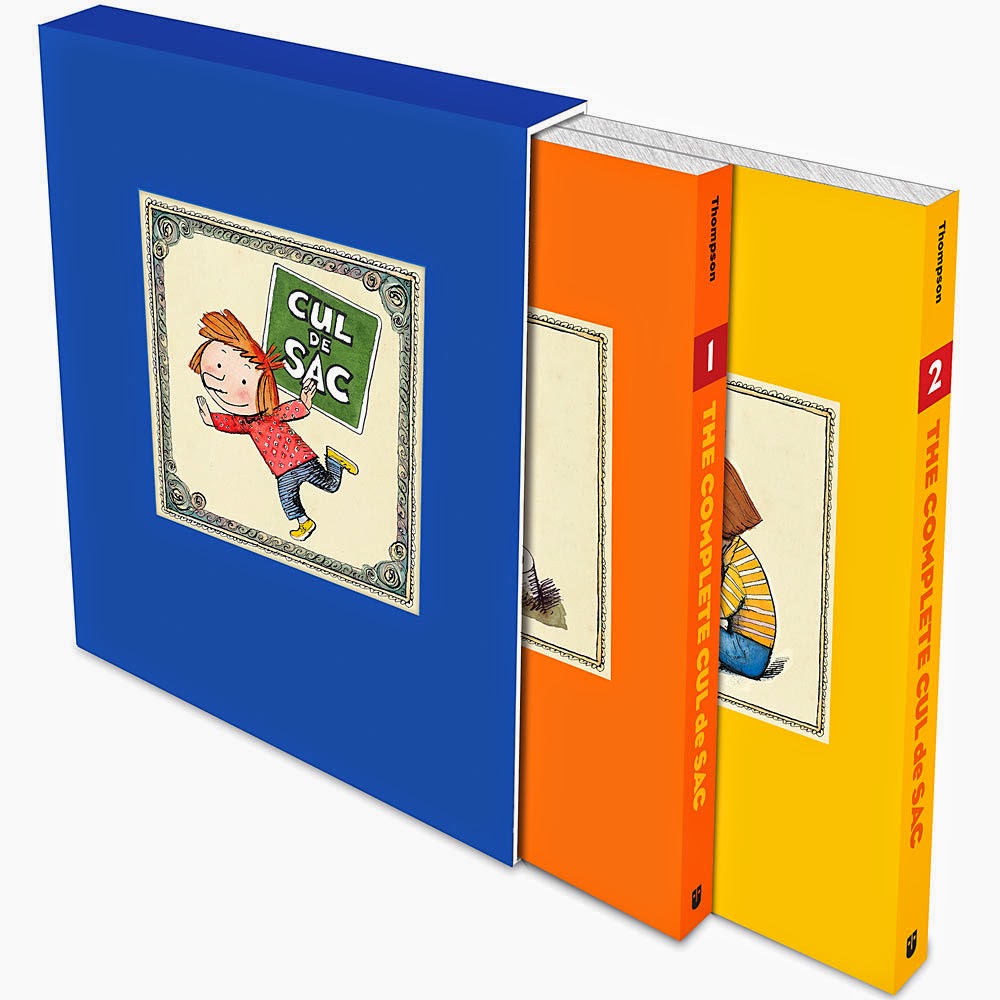 Richard Thompson was considered one of the great living cartoonists when he announced that he was ending his strip "Cul de Sac" in 2012 because of complications with Parkinson's disease. Though it was never one of the most popular comic strips, "Cul de Sac" had a passionate fanbase, including other cartoonists, who awarded him the 2011 Reuben Award for Outstanding Cartoonist of the Year.

Now the entire strip has been collected in a two-volume slipcased edition from Andrews McMeel Publishing, which will be released in May with an introduction by Art Spiegelman.

Thompson, who continues to occasionally update his website, was kind enough to talk with CBR News about the exhibition, "Cul de Sac" and this fall's "The Art of Richard Thompson."

First of all, congratulations. It was ten years ago -- as of February 4 -- that "Cul de Sac" debuted. I apologize for not bringing any tin or aluminum, but does it feel like a decade?

Ten years in anything is remarkable. It's such a very round number that it lends itself to celebration with ease -- even if nothing much has been accomplished. The early "Cul de Sac" [strips] were so different from the last strips that it's hard to see their relation.

How much did you have to do with the "Collected Cul de Sac" that is coming out in May?

I did a lot for the upcoming "Complete" edition. I annotated over 630 pages of "Cul de Sac" strips, and for a single-fingered typist thats a lot!

What's included in this slipcased collection besides every "Cul de Sac" strip?
I wrote funny justifications for almost every strip -- is that not enough? If it's not, you will have to wait for the release of "The Art of Richard Thompson" due out this fall -- also from Andrews McMeel. That will have sketches, roughs and all the backstage stuff you fanboys love so much -- including a 26-page conversation about the art of comics between Bill Watterson and myself. (Who wins? Buy the book and find out.)

There was a collection of your early "Richard's Poor Almanac" comics published years ago which is now out of print. Is there any chance of getting a new collection of it and your illustrations one of these years?
Mmmaybe. "The Art of Richard Thomson" has a chapter on the "Almanac." 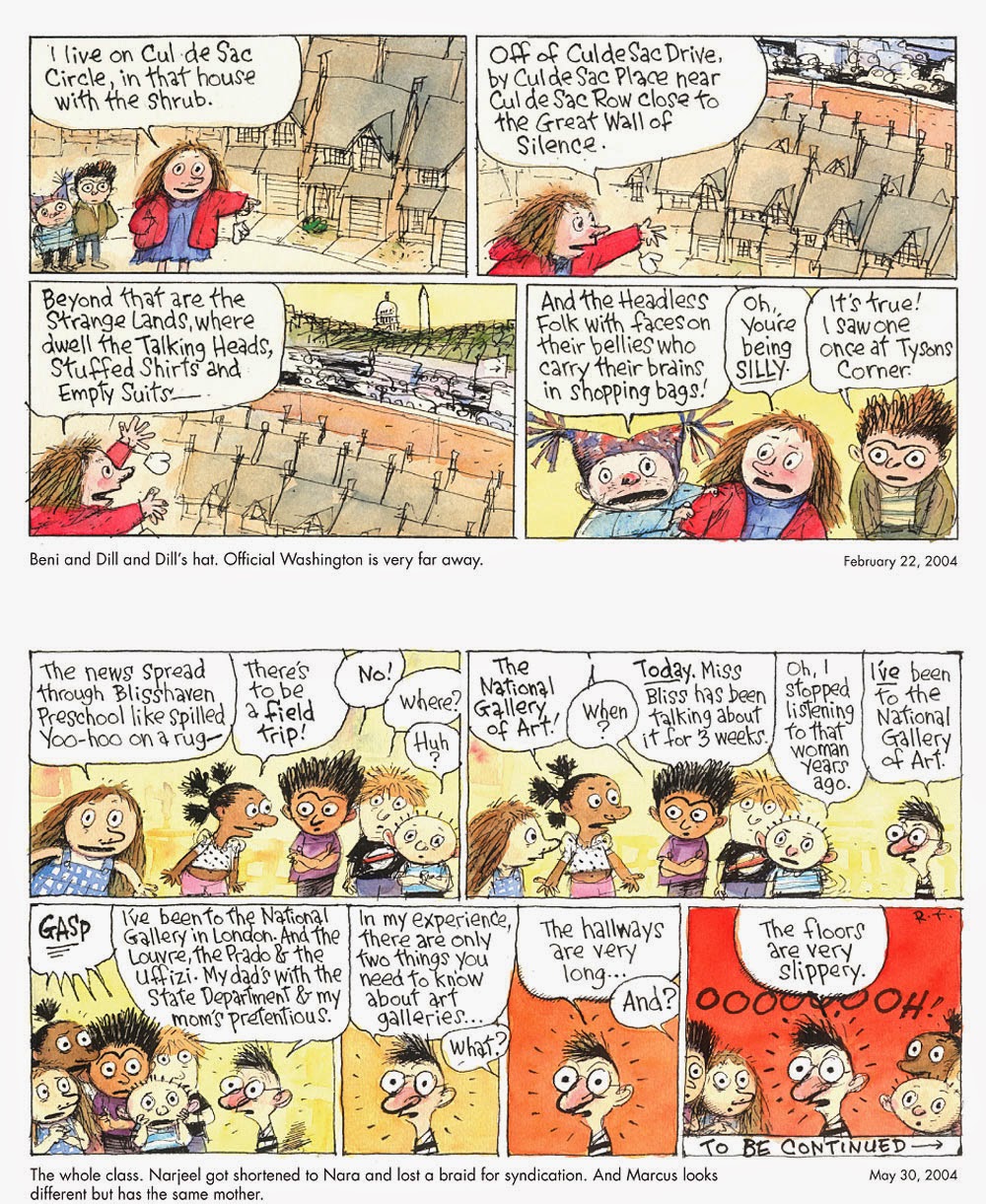 I'm sure you don't miss the constant daily deadline, but do you miss drawing the characters?

YES! I knew them all so well that it was hard to consign them to oblivion. All I can say is I have plans for them that I hope can one day be realized.

Last month, an exhibition of your work and Bill Watterson's work went up at the Billy Ireland Museum at Ohio State University. How did the exhibition come about?

Not really sure what it's genesis was, but when Bill Watterson and Jenny Robb and Caitlin McGurk gang up on you, resistance is futile.

What work is included in the exhibit?

A little bit of everything. Caricatures, illustration works, comic strips, and other things I've turned my hand to over the years. It's sort of a career wide show and I hope when I see it to figure out what I have been up to all these year.

What was it like seeing the exhibit at OSU?

I don't think I saw the whole exhibit; there were too many people that I wanted to spend time with. What I saw of it was great but mostly I remember the crowd of familiar faces. My daughters both told me their favorite parts of the exhibit. For my older daughter, it was seeing a bunch of people who where laughing at a cartoon on the wall. For my younger daughter, it was an original by Jack Kirby in the adjoining room.

For you, what do you like about seeing originals? What do you get out of it that you don't get out of seeing the final comics?

For a moment you're seeing them as there creators did. You see the mistakes, the paste-overs, white outs and penciled notations that are not visible once it was published. You see the thinking. 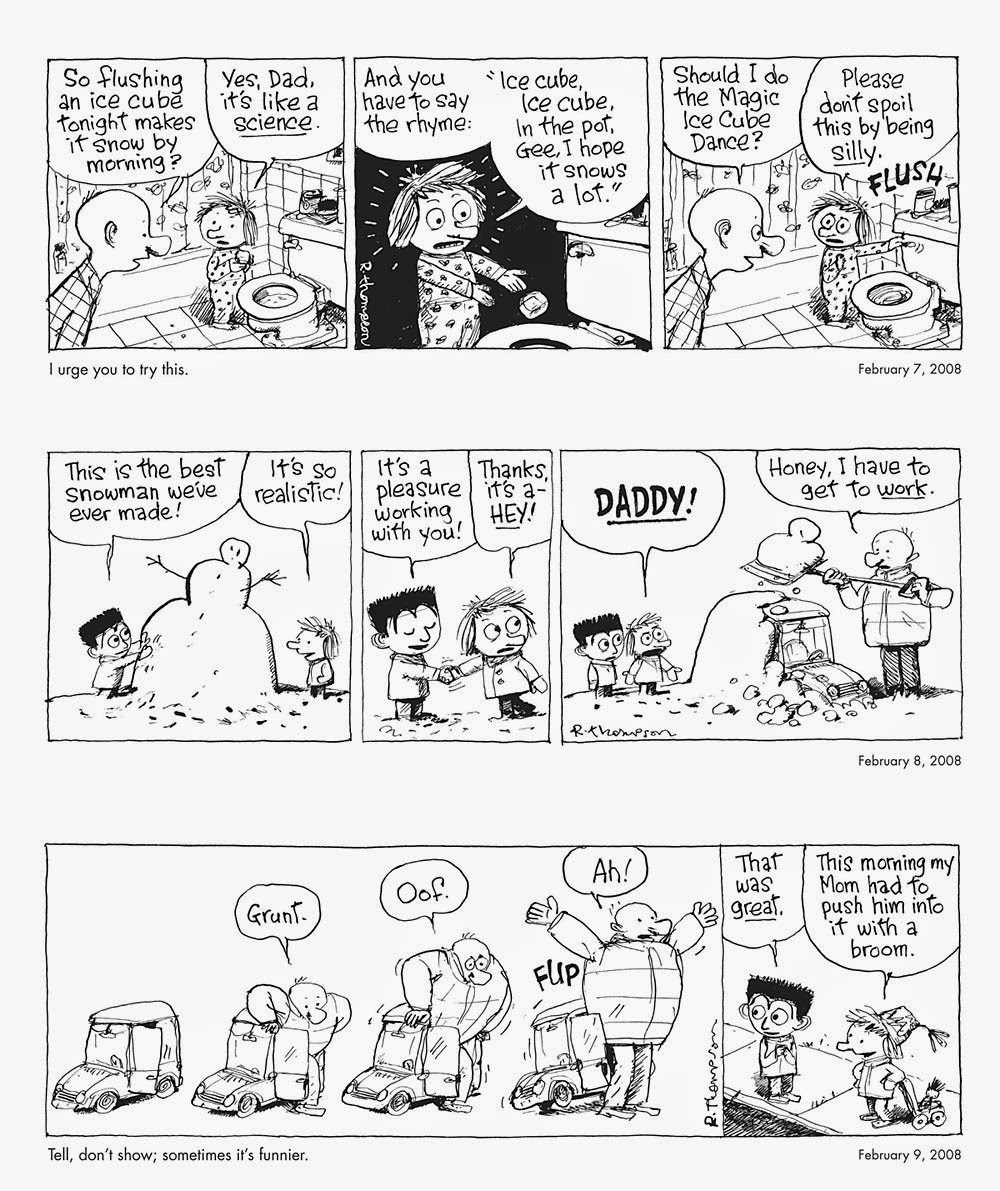 Was there a comic you saw on the wall -- either yours of Watterson's -- that made you realize something about it that you hadn't before?

Yes. Many of them. The Wattersons were all so small and deft and clean. I cannot look at anybody else's work without wondering 'how did he do that?'

As a last question, at the risk of sounding intrusively personal, how are you doing?
Well, I list to the left somewhat alarmingly and I mumble a lot. And there is a wheelchair involved, but other than that, I am okay.

Discuss this story in CBR's Community Forum forum.
Published by Bado at 8:13 AM