Our Editorial Cartoonists in Havana

Andrew Dreschel in The Hamilton Spectator. 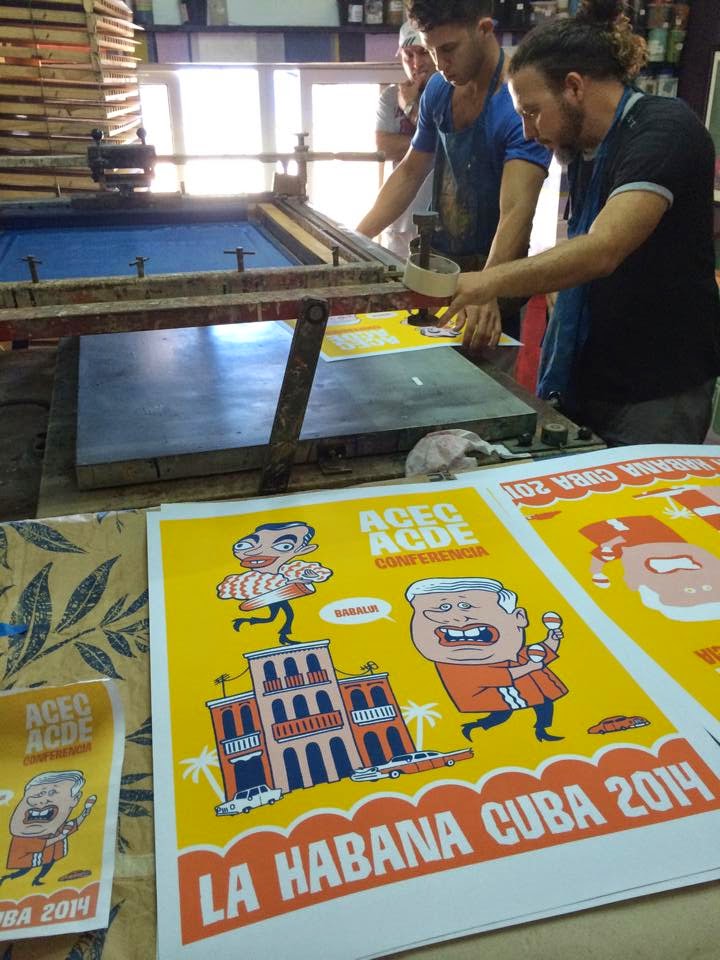 Some 28 cartoonists from across Canada are flying today to Havana, Cuba, for a five- day meeting of the Association of Canadian Editorial Cartoonists (ACEC), their professional organization that has about 60 active members.


For a group that enjoys both freedom of expression and immunity from political repression at home, the choice of Cuba as a convention destination is, to put it mildly, quixotic,

Cuba ranks a dismal 170th out of 180 countries on the World Press Freedom Index, which measures the freedom of information that journalists, news agencies and internet users have in their homelands.

Yet that's the coercive place noted cartoonists such as Andy Donato of the Toronto Sun, Sue Dewar of Sun Media, Aislin of the Montreal Gazette, and The Spectator's own Graeme MacKay have decided is a great place to talk shop.

Comfortingly, ACEC president Wes Tyrell, editorial cartoonist for Yahoo Canada News, says the group is under no illusion about the repressive nature of the Cuban regime.

"This place — there's no denying it — has a huge list of problems and an enormous list of really bad behaviour by the government."

And Tyrell, who once lived and worked in Cuba as a tour guide for a Canadian company, says he fully understands the argument against contributing travel dollars to an authoritarian government.

But he strongly believes engagement and exposing people to western ways through a "slow-moving osmosis" is ultimately more productive than American-style embargoes.

Frankly, his argument isn't that much different than the Canadian government's pragmatic approach, which promotes economic and cultural relations with Cuba while softly pressing the importance of human rights and freedom of speech.

Whether many Canadian tourists wrestle with the morality of propping up an oppressive government is, of course, unknown (I've been there; I struggled). But there's no escaping that Canada remains Cuba's largest source of tourists and ranks third as an overseas travel destination after the U.S. and Mexico.

Tyrell says a key part of the educational experience for the cartoonists is meeting with their Cuban counterparts to learn how they cope and respond to working under government restrictions.

He knows outright condemnation of political leaders never happens. They tend to criticize things in a subtle way on a social level. And political cartoons are inevitably part of the "propaganda war" against the United States.


Tyrell figures some Cuban cartoonists may want to say things to their Canadian visitors they can't, others may happily toe the government line. Either way, he looks forward to the encounters.

So does MacKay, The Spec's man in Havana. He admits he doesn't know quite what to expect and is worrying a bit about how Cuban authorities might react to some of his colleagues who are "rabble rousers and very vocal."

One thing for sure, he'll be exposing the Cubans to a thick slice of Hamilton's unique political life. MacKay is doing a power point presentation on the 2015 Pan Am Games, which Cuban athletes will attend. It includes his biting cartoons on the political ups and downs of Pan Am planning, including Hamilton's stadium fiasco and butt-chasing LRT debate.

Interesting to think he could be rotting in a tropical jail or living in exile right now if he'd tried to publish them in Cuba.

adreschel@thespec.com
Published by Bado at 2:00 AM