"Saul Steinberg: Commemorating the 100th Anniversary of His Birth"

From The Chicago Sun-Times. 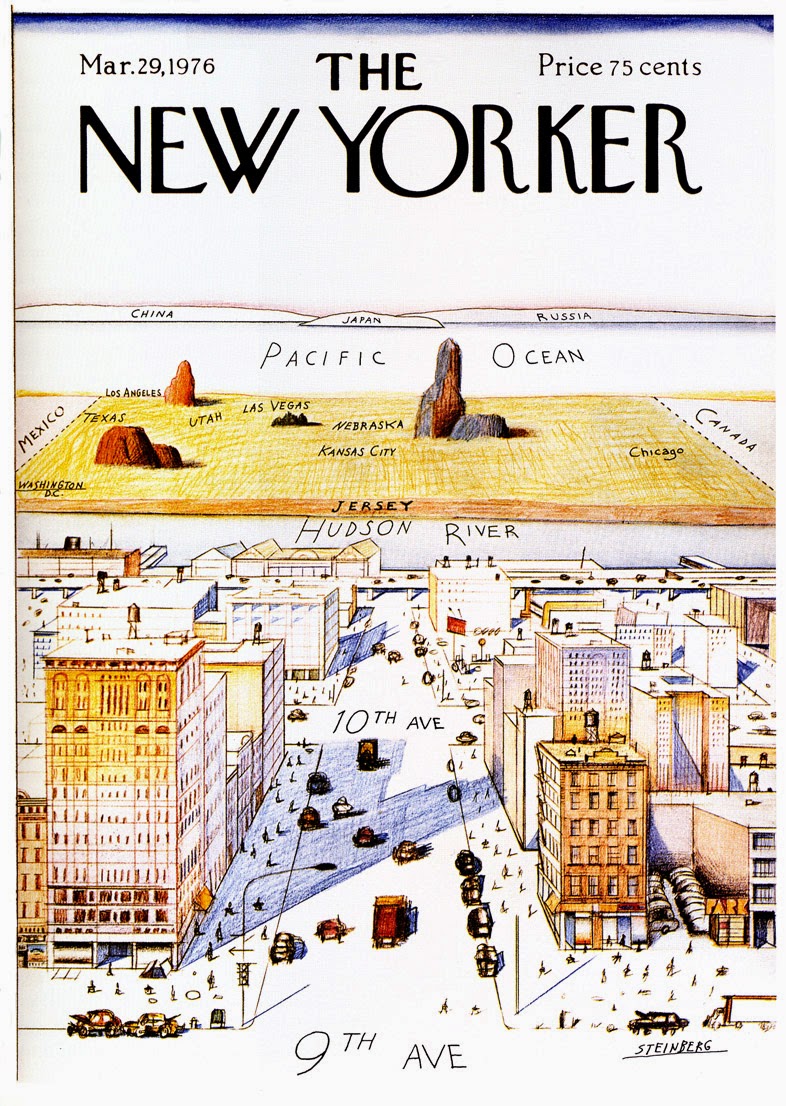 The March 29, 1976 issue of The New Yorker published an illustration that not only perfectly captured Manhattanites’ seeming attitudes about the rest of the country but also became one of the most celebrated — and parodied — magazine covers ever.

The foreground shows a bustling New York City stretching off toward the Hudson River. In the distance is the rest of the country, which has been reduced to little more than a handful of city names and several scattered rock formations.

The drawing, which is known by several titles, including “View of the World from 9th Avenue,” is probably Saul Steinberg’s best-known work, but is just one small part of a prodigious career that stretched from the 1930s through the ’90s.

The Art Institute of Chicago salutes this respected, one-of-a-kind American draftsman with a small, “focused” exhibition that opens Fridayand runs through Oct. 12. A much larger survey, accompanied by a book, is expected to take place in the next several years.

This compact show features three of the artist’s drawings already in its collection, and, more importantly, five representative examples of the 54 works recently donated to the museum by the Saul Steinberg Foundation in commemoration of the 100th anniversary of the artist’s birthday.

With this acquisition, the Art Institute now houses the largest collection of the artist’s work — public or private — outside of the New York-based foundation, which manages Steinberg’s estate and promotes his legacy.

“He is someone that we missed out on,” said Mark Pascale, curator in the Art Institute’s department of prints and drawings. “Why have so many (examples)? Because the career is rich from beginning to end, and it doesn’t get any less. It gets better. As someone who excelled at that particular thing that he did, we want to have more of his work.” 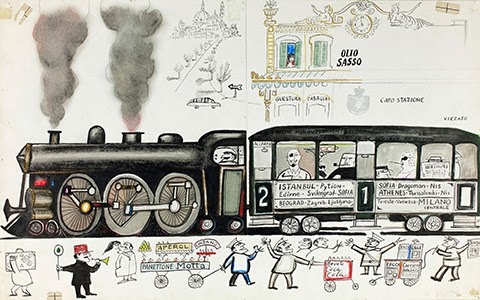 Born in Romania, Steinberg moved to Milan to study architecture and created some of his first cartoons for the satirical newspaper Bertoldo. The rise of fascism forced him to flee Italy, and he eventually immigrated to New York in 1942 and served in American naval intelligence during World War II.

When he returned to New York, he became a regular contributor to The New Yorker, creating nearly 90 covers and more than 1,200 interior drawings and cartoons. He also did work for other publications and produced a wide range of works on paper and paintings, as well as sculptures.

Steinberg managed to remain outside the art world, Pascale said, and yet be immersed in it at the same time. Three years after his first gallery exhibition in 1943, he was included in “Fourteen Americans,” a landmark show at the Museum of Modern Art that included such artists as Arshile Gorky and Isamu Noguchi.

Once the foundation agreed to make a donation of 50 works to the Art Institute, it suggested about 200 possible candidates based on a wish list from Pascale. In the end, the curator’s final selections actually added up to 54, because the foundation allowed him to count a group of five of the artist’s whimsical masks made from paper sacks as one unit. 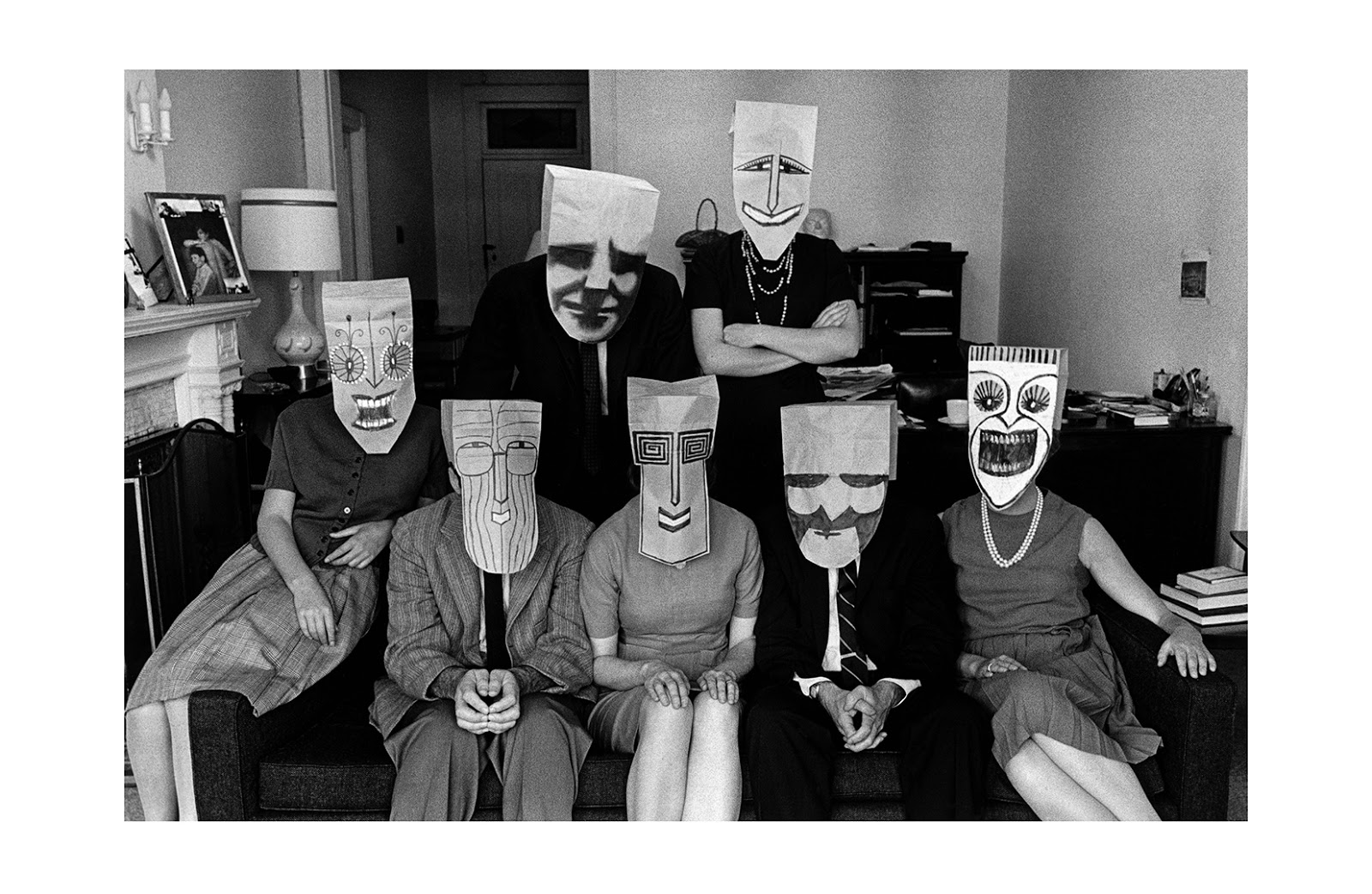 Pascale chose works that show both the quality and breadth of Steinberg’s artistry. They range from “Downtown Building,” in which collaged Victorian engravings of an ornate pipe organ and cabinet whimsically stand in for a grandiose New York skyscraper, to a 1989 New Yorker cover drawing that offers a playful send-up of Las Vegas architecture. (The 1976 “View of the World” cover drawing was not available.)

“From decade to decade,” Pascale said, “there’s always something that he is amused by, that he has something to say about through drawing.”
Published by Bado at 11:27 AM