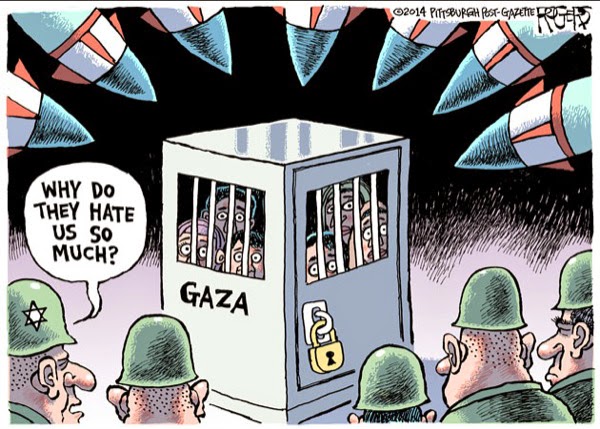 Pittsburgh Post-Gazette editorial cartoonist Rob Rogers is taking some heat from Jewish groups around the US for a cartoon he drew depicting Gaza in a jail, surrounded by missiles and Israeli soldiers with one of the soldiers asking “Why do they hate us so much.”

Andrew Kidd, editorial page coordinator for The Oakland Press wraps up some of the complaints the paper has received over the cartoon. The following quote sums up many of the arguements:

(I’m) trying to understand why the Oakland Press on Aug. 7 would run such a one-sided, anti-Israel cartoon about this summer’s Hamas-provoked war on Israel, a war which we pray will soon conclude. Your readers are first distracted by the highly offensive imagery depicting Jews which is used in the illustration. Coming right out of the Nazi propaganda sheet Der Shturmer, cartoonist Rob Rogers draws the Israelis with big noses and ears, stubbly scalps and Nazi-type helmets.

Our Detroit Jewish community is appalled by this display of anti-Semitism in an American newspaper. Looking beyond that, one then sees Israeli missiles aimed at Gazans when, in fact, it was Hamas which aimed its missiles at Israeli civilians. Israel’s response is to target the terrorists.


Israel and Gaza is such a volatile topic due to politics, religion and history that I don’t think a cartoonist could wade into the issue and NOT have someone angry at them.
Published by Bado at 2:00 AM