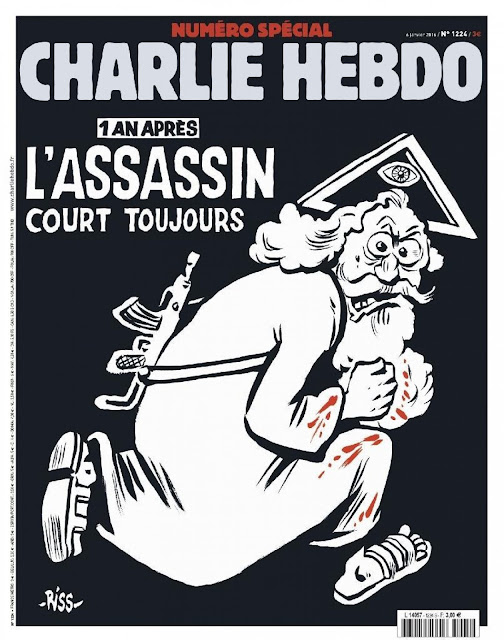 French satirical weekly Charlie Hebdo will mark a year since an attack on its offices with a cover featuring a bearded man representing God with a Kalashnikov slung over his shoulder, accompanied by the text: “One year on: the assassin is still out there.”


One million copies of the special edition will be available on newsstands on Wednesday, with tens of thousands more to be sent overseas.

It will mark a year since brothers Chérif and Saïd Kouachiburst into Charlie Hebdo’s offices in eastern Paris and killed 12 people, including eight of the magazine’s staff.

The attack on 7 January 2015, claimed by al-Qaida’s branch in the Arabian Peninsula, came after a 2011 firebombing of its offices that forced it to move premises. Its staff had also been under police protection since it published cartoons of the prophet Muhammad in 2006.

Included in the special edition will be a collection of cartoons by the five Charlie Hebdo artists killed in the 2015 attack as well as several external contributors.

Cartoonist Laurent Sourisseau, who took over the management of the weekly after the attack, also wrote an angry editorial in defence of secularism. It denounces “fanatics brutalised by the Koran” as well as those from other religions who hoped for the death of the magazine for “daring to laugh at the religious”.

Sourisseau, known by the nickname Riss, narrowly escaped death and was seriously wounded in the attack a year ago.

A month before the shootings, Charlie Hebdo was close to shutting down as sales had dipped below 30,000. Its brand of provocative, no-holds-barred humour appeared to have gone out of fashion.

But the attack sparked horror across the world. Donations poured in for the victims, 7.5 million people bought the first post-attack issue and 200,000 people signed up for a subscription.

However, the magazine’s staff feel unsupported in their struggle, said financial director Eric Portheault, who escaped death by hiding behind his desk when the gunmen stormed in.

“We feel terribly alone. We hoped that others would do satire too,” he said. “No one wants to join us in this fight because it’s dangerous. You can die doing it.”

France will this week mark the anniversary of the attack.

Subdued ceremonies are to take place under heavy security to mark the Charlie Hebdo killings and the attack on a kosher supermarket in which three gunmen killed 17 people.

With the country on high alert in the wake of the Paris attacks in November which left 130 dead, soldiers will be out in force protecting official buildings and religious sites for the anniversary.

Commemorative plaques will be unveiled at the sites of the January attacks, including at the weekly’s former offices, in modest ceremonies attended by families and government officials, a City of Paris spokesman said.

On 10 January, a more public ceremony will take place on the Place de la République, the square in eastern Paris which became an informal memorial.

President Francois Hollande will preside over the ceremony, during which a 10-metre-high commemorative oak tree will be planted.


Agence France-Presse and Reuters contributed to this report