Matilda Battersby in The Independent


“I would rather go to jail than succumb to the regime”: these are the defiant words of Iranian satirical cartoonist Atena Farghadani, who is just the latest in a long history of extremely brave creative people to prove that brutal subjugation cannot subdue political protest through art.

She was released from Iran’s notorious Evin prison just a handful of weeks ago but has already posted a new cartoon on Facebook. A small thing, you might think. But when a cartoon in which she depicted government officials as farm animals appeared on that social networking site in 2014, it led to her receiving a prison sentence of more than 12 years. During her ordeal Farghadani was beaten, strip-searched, went on hunger strike and – despite being only 29 – suffered a heart attack.

Remaining an artist even under extreme duress, during her imprisonment Farghadani flattened the paper cups and used them to paint and draw on. When the prison guards realised what she was doing they confiscated the cups and stopped giving them to her. When she found some in a bathroom she managed to smuggle them into her cell to continue to work. But, according to Amnesty International, the guards found them and Farghadani was badly beaten when she refused to strip for a full body search. 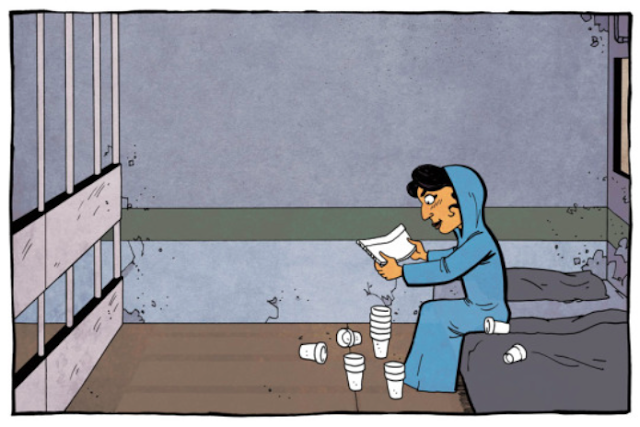 Panel from a comic strip from "princessxsugar"


Farghadani is an extraordinary woman. She is working to promote human and female rights in a repressive society with a long record of abuses, in defiance of a regime that hands down prison sentences to artists, journalists, bloggers and activists that seem wildly heavy-handed and bafflingly wrong to outsiders and many Iranians. Now that’s she’s free, she apparently has no intention of leaving Iran and seems determined to continue to produce artworks uncensored.

She has not only grabbed the attention of the regime through her searingly brilliant cartoons; she has also gained the eyes of the entire world as fellow cartoonists armed themselves with pencils to #Draw4Atena, with hundreds of new artworks published online calling for her release and drawing attention to the plight of other prisoners of conscience.

One of the cartoonists who championed her cause in a series of original works, Gavin Aung Thang, described why he was so moved by her cause: “Atena was just like me, drawing cartoons at home and posting them online. To think someone could be jailed for doing what I take for granted every day really hit home,” he says.

“The fact that she was an amateur cartoonist. She wasn't working for a well-known newspaper or even a online outlet or blog, she had just posted one cartoon on Facebook. Thousands of people every second of every day post the most hateful vitriol on Facebook without any consequence. It was almost laughable at how minor her offence was. The fact that she faced 12 years in prison, had been beaten and had already suffered from a heart attack while imprisoned was even more outrageous.”

The artwork that first landed Farghadani in jail was a protest at plans by the Iranian government to restrict women’s access to contraception and to outlaw voluntary sterilization. The piece depicted Iranian government officials as goats and monkeys. She was arrested in August 2014 and spent three months in Evin prison in Tehran, two weeks of which in solitary confinement.

Upon her release, unbowed, she wrote letters of protest to Ayatollah Ali Khamenei, the Supreme Leader, Hassan Rouhani, the President, and the head of the prison service, claiming she had been beaten, strip-searched and verbally abused during her imprisonment.

Receiving no reply she uploaded a video describing her experience in Evin again – a brave act which unfortunately culminated in her being re-arrested in January 2015 and sentenced in June by controversial judge Abolghassem Salavati for “colluding against national security”, “spreading propaganda against the system” and “insulting members of the parliament” through her artwork.

As if a 12-year-and-nine-month sentence wasn’t bad enough – with the artist expecting to be released around her 40th birthday – Farghadani was then accused of “indecency” for allegedly shaking her male lawyer’s hand when he visited her in jail and looked set to face an even longer prison sentence. But a petition by Amnesty International that garnered more than 33,000 signatures and the continuing campaign by cartoonists around the world orchestrated by the international Cartoonists Rights Network (CRNI) shone an embarrassing international spotlight on her predicament.

In May a successful appeal by her lawyer Mohammad Moghimi succeeded in reducing her sentence to 18 months – which she had already served. She was acquitted of counter-revolutionary activity and undermining national security and her sentence for insulting Supreme Leader Ayatollah Ali Khamenei was suspended for three years.

Last week a newly released Farghadani proved her crusading spirit is undimmed, publishing a photograph of herself holding her latest work, a cartoon depicting the president of Alzahra University, from which she was expelled following her arrest. The university president is Ensieh Khazali, the daughter of Ayatollah Khazali, a hardline politician who died in 2015. The cartoon depicts Ensieh chained to a chair bearing the late Ayatollah’s face.

Speaking to CRNI the artist described herself as “so happy” to be free, expressed her appreciation for all the cartoonists who highlighted her plight and said that she wants to stay in Iran and to continue working as an artist.

“It's great news that Atena's free, but she should never have been imprisoned in the first place - she hadn't committed any crime,” Amnesty International says. “She was a prisoner of conscience, punished for peacefully expressing her opinion.”
Published by Bado at 12:00 AM