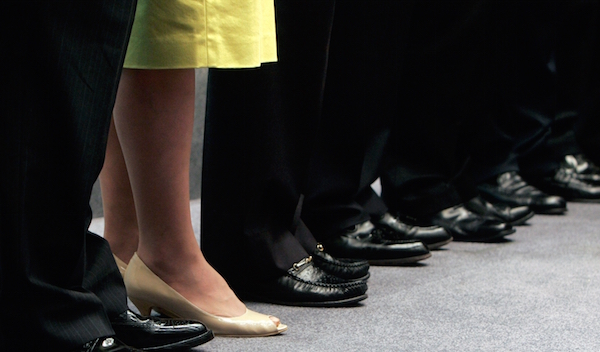 Earlier this month, cartoonist Kshitij Bajpai got a shoutout on Twitter from a very important person.

Prime Minister Narendra Modi acknowledged an illustration Bajpai had made of him after attending an election rally in Mangaluru, Karnataka.

“Lovely gesture Kshitij. Thank you. You are an extremely talented artist,” Modi said.

For any artist, high praise from the Prime Minister of the country on a public platform is career-altering. However, it takes only a few minutes of casual scrolling through Bajpai’s Twitter account to know not just his political affiliation, but also the deep misogyny that power his cartoons.

Holding a poster that reads “I am a Bollywood prostitute and I will not speak on gangrape in Ghaziabad madrasa” is a supposed caricature of actress Swara Bhaskar who condemned the gangrape of a minor girl in Kashmir in a similar manner.

In subsequent posts, Bajpai uses the hashtags #BollywoodProstitute and #BollywoodSlut to attack actors Sonam Kapoor, Richa Chadda and Huma Qureshi, all vocal champions of women’s rights and critics of the gang-rape and murder of an 8-year-old Muslim girl in Jammu and Kashmir’s Kathua.

Another cartoon by the “extremely talented” artist shows Delhi, personified by a woman in a saree, being raped supposedly by the state’s Chief Minister.

Hate — towards minorities, and women — is a recurring theme in Bajpai’s cartoons.

It beggars belief that Modi has not seen this cartoonist’s other works before championing the one that flatters him. If he has, it’s baffling that the PM of a nation endorses a man whose cartoons repeatedly uses communal imagery to belittle Muslims.

There are several reasons behind thriving misogyny in political cartooning, the main being the absence of women as editorial cartoonists who can callout sexism with powerful satire of their own and restore the gender balance in mainstream media art.

There is just not enough representation by women in political cartooning.

“There is an outdated notion that media is consumed by men. I don’t trust them (media managers) to change that view,” says Rachita Taneja, the creator of the brilliant Sanitary Panel comic strip. 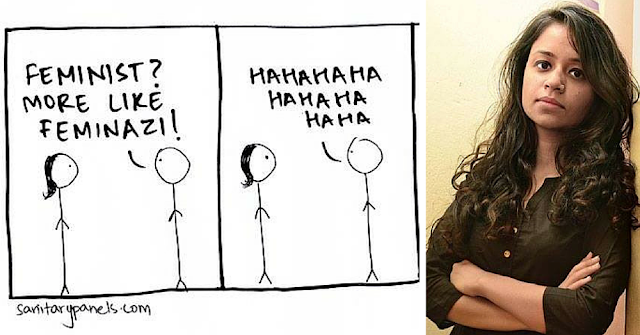 Therefore, the jokes that men are likely to laugh at, are more likely to be published, she says.

“My content is what women want to see,” she says.

Taneja’s artwork is feminist, political and hilarious. And as any woman with an opinion on the Internet knows, it comes with a price.

“A popular internet media company once published some of my panels. The comment section was scary.”

Abuse and humiliation is one of the reasons that keep women away from fierce political satire.

Add to that the sexist rote that women do not have the ability to analyze politics and aren’t as funny as men.

While Bajpai’s blatantly misogynistic and crass cartoons draw effusive praise from fans of the Bharatiya Janata Party (BJP), a woman journalist who drew a political cartoon depicting a conversation between Hindu God Ram and his wife, Sita, to condemn the Kathua rape, was harassed and threatened.

In Swathi Vadlamudi’s cartoon, Sita is seen telling Ram that she is “glad” that she was kidnapped by Ravana and not Ram’s followers. 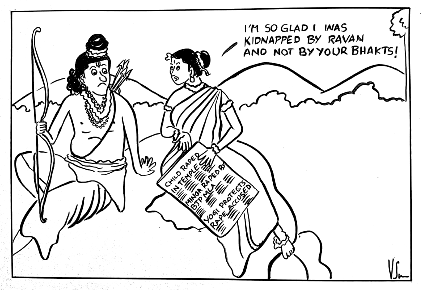 The cartoon was shared by many on social channels and Vadlamudi faced a relentless barrage of abuses from right-wing trolls.

A case was registered against her at the behest of a right-wing group who claimed she hurt their sentiment.

In February, a cartoon by Hemant Morparia mocking the #MeToo movement upset many women. 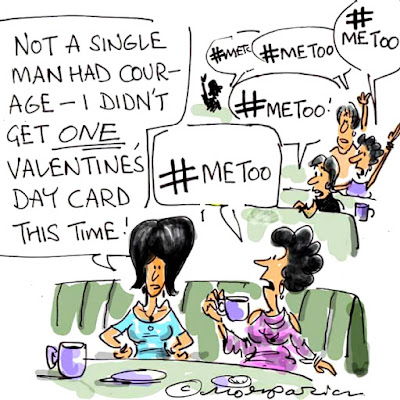 The sheer tone-deafness of the cartoon drew the ire of women who pointed out the years it took sexually abused women around the world to speak up.

Morparia defended his work saying it was well received by many men and women who had a sense of humour.

“Political cartooning, especially for mainstream media is not an easy job. It requires years of training, a journalistic mind, and a sense of humour. There are no schools where you can learn this kind of cartooning in India,” says cartoonist Manjul.

“When you don’t give women the right to criticise from a very early age, how will they come up (later in the field). I am ready to believe that women have a better sense of humour than men. I have seen women cartoonist who are better than men,” he says.

Yet none are employed by India’s hundreds of newspapers and websites – women whose work you can see when you open a newspaper in the morning.

Manjul speaks of the great Maya Kamath, one of the pioneers of editorial cartooning. 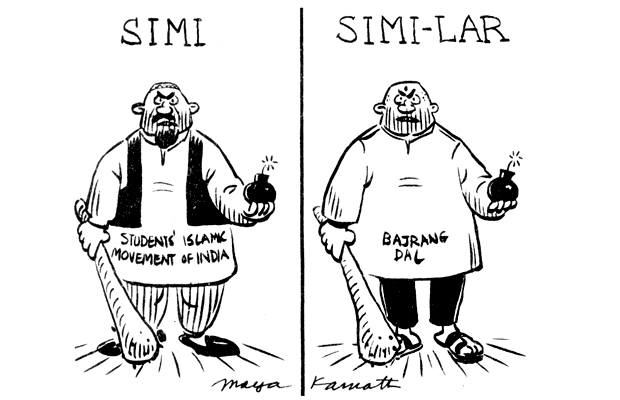 Kamath started her career as a cartoonist for The Evening Herald and later worked for other Indian newspapers such as The Indian Express, The Asian Age and The Times of India.

She died at the age of 50 in 2001. An annual Maya Kamath Memorial Award is instituted in her name to award talented cartoonists.

“I have personally seen Maya Kamath’s work. She was such a sensitive cartoonist. Manjula is fabulous. But other than that I’ve not come across that many good political cartoons done by women,” he says.

There are of course many independent women illustrators and comic artists.

Manjula Padmanabhan, a contemporary of Kamath, is one of India’s first woman cartoonists. Her comic strip Suki was a staple in a Mumbai weekend newspaper and a Delhi newspaper. A strip called the Suki Yaki now appears in a business daily.

Two popular online websites now have weekly lists of the funniest tweets by women to discount the point that women aren’t as funny as men.


In his 40 years in the media, senior editorial cartoonist Jayanto Banerjee says he’s done several workshops and always found there were fewer women than men in attendance.

“As far as I know, there are no institutes in India that teach cartooning. In political cartooning, you will find there are mostly men. Even Manjula does light political work,” he says.

Banerjee is of the opinion that to be a cartoonist one needs a “different kind of mental setup.”

“There are no courses that you can take to be a cartoonist,” he says.

According to him the combination of a talent in art, humour and understanding of politics makes for a good political cartoonist and there are no specific reasons why this field has so few women.

“In my workshops, I tell the girls that it’s a very good profession and they must pursue it as a career option.”
“But the encouragement must also come from home, ruled still in large parts of India through a patriarchal understanding of women’s role in society. If a woman shows talent in political cartooning, parents have to encourage that,” he says.

“If you notice, male political cartoonists often tend to use male characters depicting who their primary audience is,” Taneja, further adds.

A woman’s gaze is urgently needed to scrutinize political chauvinism. It comes down to the issue of representation, only with which this problem can be addressed.

Rituparna Chatterjee is a feminist journalist and writes on gender parity, women’s rights and social inequality. She started her career with The Statesman newspaper in Delhi and has worked in digital and print media for the last 15 years. The views expressed are author’s own.
Published by Bado at 8:57 AM