Alan Gardner in The Daily Cartoonist.

An organized campaign by over 900 mayors across the US to support gun control efforts in Washington has launched a video featuring 23 cartoonists who are supporting the effort. The video is calledCartoonists Demand Action to End Gun Violence.


Ruben Bolling, who speareheaded the effort to enlist the cartoonist wrote more about the video on his blog:

For myself and many of the contributing cartoonists, this was a unique experience, shedding our badges as humorists, satirists and storytellers, and creating artwork as unabashed advocates. But fighting gun violence has become a singular issue, and I was deeply gratified that this group of incredibly talented artists joined me at the drawing board to demand action.
When I asked cartoonists to create artwork the this project, I was shocked at how enthusiastically and passionately they agreed. And when I thanked them for helping, I was amazed that so many thanked me for organizing the project and for including them.

He also notes that all the artwork (except Spiegelman) are originals drawn specifically for this video. that’s what struck me was how well the cartoons flowed together. Well done.
Maybe we’ll see the list of cartoonists on the NRA’s blacklist grow.

While we're on the subject, here's a very nice cartoon by Chris Weyant: 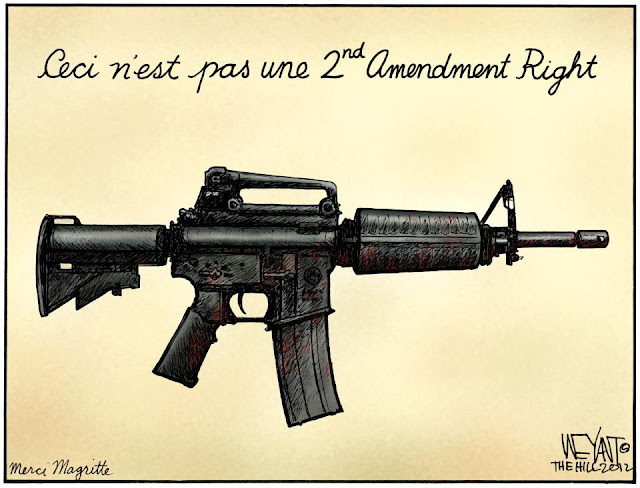