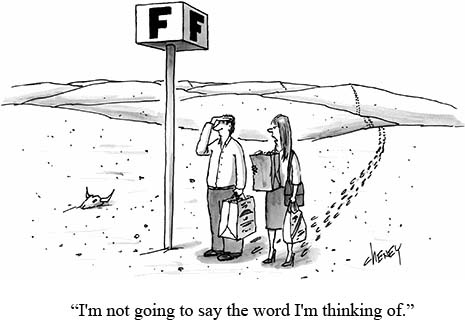 I have entered the New Yorker’s Cartoon Caption Contest almost weekly virtually since it began and have never even been a finalist. Mark Twain advised: “Write without pay until somebody offers to pay you. If nobody offers within three years, sawing wood is what you were intended for.” I have done more writing for free for the New Yorker in the last five years than for anybody in the previous 40 years.
It’s not that I think my cartoon captions are better than anyone else’s, although some weeks, understandably, I do. It’s that just once I want to see one of my damn captions in the magazine that publishes the best cartoons in the world. Is that too much to ask?

Done. To the delight of film fans, film-criticism fans, Caption Contest fans, and Roger Ebert fans—and count me among all of the above—Mr. Ebert has finally fulfilled his quest to win The New Yorker Caption Contest.

Two thumbs up for you, Roger.
Roger was being a bit hyperbolic when he claimed to have entered practically all of the contests since its inception. Out of a possible two hundred and eighty contests leading up to his win in No. 281, the Bureau of Cartoon Caption Contest Statistics reports that he entered only a hundred and seven, which puts him in five hundred and sixty-ninth place out of 502,416 unique entrants, who have submitted a total of 1,595,506 captions.
I’m more impressed with the quality of Roger’s submissions. Here are three I really liked.

And this great one, which did not get past the Caption Contest Board of Censors.

Quantity does not guarantee quality. But as Malcolm Gladwell has pointed out, in most fields, the more you do, the better you get at it. And this is true of Cartoon Caption Contests: In 2009, the creativity researcher Keith Sawyer interviewed a number of winners and found that,

I know cartoonists would echo that sentiment. Every week most of them submit ten to fifteen ideas. Jack Ziegler, who has published more than fourteen hundred cartoons in The New Yorker, once remarked to me that he finally started getting the hang of it after about the three thousandth one.
Well, Roger Ebert certainly has the hang of it now. And I see he has entered contest No. 282, so stay tuned.