Steve Riley in The News & Observer. 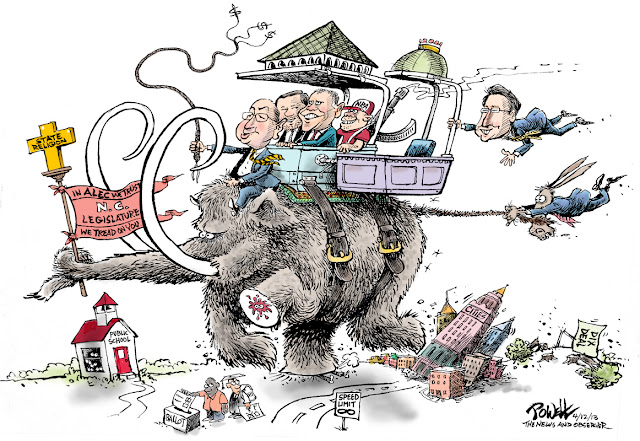 Like most readers, I first encountered Dwane Powell in the newspaper, not in person.

I had just moved here to work at The News & Observer. One morning in July 1986, his editorial cartoon depicted Ed Meese, then the U.S. attorney general, who had been leading a fairly aggressive commission looking into pornography.

The philosophical edge of the cartoon wasn’t that important. What caught my eye was that this guy had something to say, and he said it clearly.

He did it consistently enough during his 35 years here that come Sunday evening, he’ll be inducted into the North Carolina Journalism Hall of Fame, along with a group that includes former Wall Street Journal exec Alan Murray and photographer Chris Hondros, who was killed on assignment in Libya in 2011.

“I owe a big debt of gratitude to the people who supplied the stories, the people who did the hard work,” Dwane said this week. “And also the politicians. You can always count on them for something.”

The hall induction is a fine honor, and it’s well-deserved. Dwane, 68, unleashed more than 8,000 cartoons during his career, most of them piercing a deserving politician or other member of the high and mighty. Some got angry. Some laughed. Nearly all asked for originals.


That’s the Dwane Powell most readers know. But after I saw that Meese cartoon, I wanted to get to know Dwane. Little did I know what I was getting into.

Being a friend of Dwane is to be sucked into a vortex of humor, music, fun, photography, righteous anger and the kind of impish wit that keeps you alert. He doesn’t experience life; it oozes through him.

To say that his right brain is in charge is akin to saying there’s been a bit of pollen in the air lately. He’s like a Lab puppy let loose in a fresh meadow, uncertain of what spots to mark first or which tennis ball to retrieve.

Important dinners? He’s missed one or two. Forget that a paycheck is in his jacket pocket? Yep. Misplace the keys to the rental car during a ski trip? Check.

A friend once was at the YMCA near downtown Raleigh around lunchtime and saw Dwane there in a full sweat. “Say, Dwane, aren’t you supposed to be speaking at the governor’s mansion?”

Yes, he was. But he made it, a bit late, and by all accounts put on a fine show.

His friends have a word for this: Dwane-ing, meaning to move happily and unconcerned through life, guided by the help of others. And Dwane does get occasional direction, sometimes from buddies but mostly from his wife, Jan, an accomplished businesswoman who has nudged him for 42 years with remarkable calm.

At work, if you could call it that, a routine kept him grounded: Come to the office. Read some papers. Complain about the state of the world. Search for an idea. Go to the Y for a workout. Waste some of the early afternoon. Start worrying about deadline. Come up with a sprig of an idea. Test it on someone in the office. If they double over, go draw it, just in time.

Five times a week, for 35 years, that’s what Dwane did. He retired in 2009, but the ideas continue to flow. No bar napkin, no restaurant tablecloth, is safe from a Powell sketch. And now he has been coaxed back to The N&O, once a week, for a Sunday cartoon.

On Sunday night, he’ll share the spotlight in Chapel Hill. No, he hasn’t started working on his remarks.