Fans of comics, manga, and graphic literature will be clearing their calendars this May to attend the 10th Anniversary of The Toronto Comic Arts Festival.

Taking place May 11th and 12th 2013 at Toronto Reference Library & The Appel Salon, TCAF is expected to draw a record crowd of 20,000 across all festival events, and will reach new heights as one of the most celebrated literary comics events in the world!

TCAF 2013 will feature the largest and most international array of comics authors and artists in the history of the Festival, a virtual who’s who of literary cartoonists including featured guests:

David B.: Author of Epileptic, co-founder of L’Association. Attending in support of Black Paths from publisher SelfMadeHero. (France)

Chihoi: Exciting, young talent from Hong Kong. Debuting his first the first ever English version of his work, The Library from publisher Conundrum Press. (Hong Kong)

Glyn Dillon: Appearing in support of the critically-acclaimed The Nao of Brown, from publisher SelfMadeHero. (UK)

Judith Vanistendael: Author of Dance by the Light of the Moon. Debuting When David Lost his Voice from publisher SelfMadeHero. (Belgium)

The featured guests join a fantastic and diverse array of more than 300 Canadian and international cartoonists who will make up the 2013 Festival. 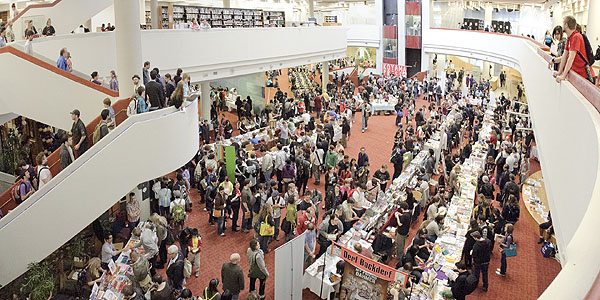 
TCAF Turns Ten: The 10th Anniversary of The Toronto Comic Arts Festival will not go unobserved, as a massive participatory gallery-show will mark the official kick-off of the festival, held at and in conjunction with Steam Whistle Gallery. The thousand-plus cartoonists who have participated in TCAF events since 2003 will be invited to contribute their special vision of Toronto and Comics in a wonderful celebration of the Festival and the city we call home.

The World Of Taiyo Matsumoto: This talented and prolific cartoonist’s career will be explored through a full program of Festival events, headlined by an exhibition of original artwork and goods, to be held at and in conjunction with The Japan Foundation, Toronto. Further events will include a special screening of the film Tekkon Kinkreet (based on his graphic novel), with Director Michael Arias and Screenwriter Anthony Weintraub in attendance.

Everything You Love… And More!: TCAF 2013 will reprise our most popular programming from the history of the Festival, including the annual Doug Wright Awards for Canadian Cartooning and our popular Webcomics Pavilion, OWLkids Kids Area, Wowee Zonk Small Press Area, Panel Discussions and Interviews, Workshops, Readings, and much more. These events will take place in and around Toronto Reference Library, official TCAF hotel The Marriott Bloor-Yorkville, and the Yonge-Bloor neighbourhood.