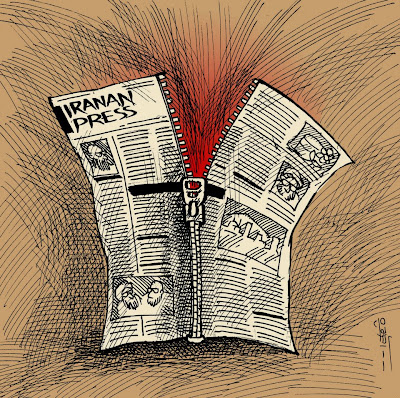 In 2009, following Iran’s controversial election, many Iranians took to the streets and the web to voice their dissatisfaction. One of those who participated was Kianoush Ramezani, who at that time was publishing cartoons online as well as in Shahrvand, a Persian magazine based in Canada. Ramezani drew several cartoons criticizing the election results. Over the next seven months, Ramezani watched as his friends and colleagues were arrested. It seemed inevitable that it would happen to him too. Finally Ramezani had no choice: He fled Iran in December of 2009 and was granted political asylum in France. Since then Ramezani has continued to draw and speak out against oppression in his home country.

In this interview, Ramezani describes the three kinds of cartoonists in Iran, how the government controls cultural institutions, and why the Iranian government will never be able to control the internet.

What are the most popular themes Iranian cartoonists cover? Why? Can you give me an example?

For neutral cartoonists who are still able to publish their work and have exhibitions, the most popular themes are the most visual and non-political ones! 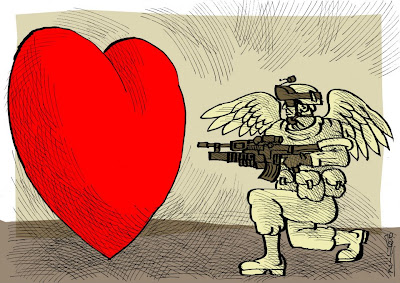 What is the most dangerous theme for an Iranian cartoonist to cover? What are the consequences of covering this theme?

The most dangerous theme is Islam, its symbols, and the prophet. It’s also dangerous to cover the leaders of the Islamic regime of Iran, especially the mullahs. If, by accident, a cartoonist offends any of these, he or she could easily be executed for insulting Islam or the revolution.


But it seems that is a fourth kind of cartoonist. One that is inside the country and is neither governmental nor neutral. In 2012 cartoonist Mahmoud Shokraye was sentenced to 25 lashes for a caricature he drew of a Prime Minister….
The cartoonist apologized many times, and they forgave him and didn’t punish him. That case didn’t have any particular effect on cartoonists in Iran, because the situation has been this bad for several years.


The Iranian government has increasingly been trying to create a “National Internet” which would limit users’ international access. They are now trying to block Virtual Private Networks, which circumvent the government’s restrictions. If they are successful, how will this limited internet affect Iranian cartoonists?

As you can see, they will never have any success with totally blocking the internet. The new generation of Iran is very intelligent and skilled in information technology; besides, there are many Iranian opposition resources from abroad which help them fight blocking. At this moment, there are still millions of Iranians using Facebook and reading the opposition websites which are officially blocked.

If one day the government can successfully block the internet, unfortunately we exiled cartoonists will lose our connection to our audience inside the country. But, as I mentioned, it will probably become much better for neutral and government cartoonists. 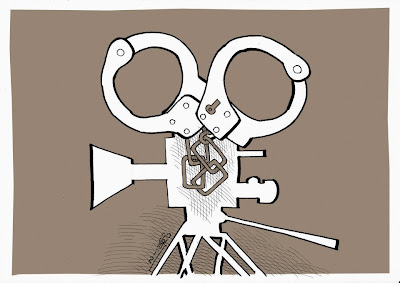 Iran’s Tabriz Cartoonist Association has over 500 members, and the country is home to the Tabriz Cartoon Museum, one of only five cartoon-specific museums in the world. How closely are organizations like these monitored by the government?

These kind of organizations don’t need to be monitored by the government because they belong to the government! Government-sponsored cartoonists established and control them, and they receive salaries from the government for this! There is also the Iranian House of Cartoon which monitors all cartoonists (both inside and outside of the country) and runs all national cartooning events (like the Tehran International Cartoon Biennial).

The director of the Iranian House of Cartoon, Massoud Shojai Tabatabai, is also the editor-in-chief of Kayhan-Caricature, a cartoon magazine owned by the newspaper Kayhan. The editor of that newspaper, Hossein Shariatmadari, is the official representative of Ayatollah Khamenei. So the Iranian House of Cartoon and Kayhan-Caricature are both under the supervision of the supreme leader.


Iran’s presidential election is only a few months away, and media censorship is increasing as the election comes closer. Are cartoonists facing any specific restrictions or pressure? In what ways do you think cartoonists will be able to bypass censorship?

Unfortunately there’s no way to get rid of censorship. But, for example, from exile I am able to draw a series about the upcoming election. The U.S. Ministry of Foreign Affairs has a very active Persian Facebook page, and they’re publishing my cartoons there, as well as on many Iranian opposition websites and social networks.

Kianoush Ramezani was born in Rasht, Iran in 1973. He attended the University of Guilan and graduated with a degree in horticulture in 1996. In 1997 he founded the Guilanian Association of Cartoonists and served as its president until 2000. In 2003 he became the Iranian affiliate for Cartoonists Rights Network.