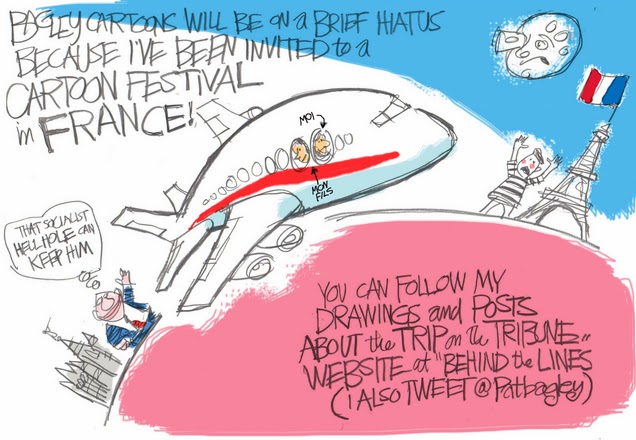 The idea for the International St-Just Cartoon Festival came more than 31 years ago to Gérard Vandenbroucke, the mayor. As far as I can tell Gérard has always been mayor of this small town set in rolling french countryside where cows seriously outnumber people.

Gerard is a Socialist, because, as my son points out, he likes to socialize.

It appears the whole town is social-ist, too. Not content socializing with just each other, three decades ago the people here, led by their visionary mayor, banded together to throw a party that would attract people from all over the globe. Cartoonists seemed to be a worldwide phenomenon, and being French with a soft spot for artists, St-Justians choose my profession to celebrate.

They eventually built two world class halls that are combination museum/convention/reception centers with plenty of room to socialize in. Think Mormon stake center with wine and a cultural hall that is actually dedicated to culture and not basketball.

For two weeks every October, cartoonists from around the world arrive to be fed, feted and fatted. This year, there are almost 200, who stay as guests of the town, more often than not in the homes of citizens. Sometimes remarkable bonds spring up between host and guest. Alex Watson, a Scottish cartoonist, has been returning to stay with the same family for decades.

I arrive with the American contingent. Including a spouse and son, there are six of us. Daryl Cagle is our leader and the only one who has previously attended. Besides being a cartoonist, he is also the head of a cartoon syndicate that carries cartoons from around the world.

Among Cagle’s cartoonists are Steve Sack and Bob Englehart, both here in St-Just, Bob with his wife, Pat. My son and I round out the crew.

Instead of being shared out to the homes of locals, we are put up in a hotel outside of town. After much discussion we attribute this state of affairs to our American Exceptionalism: our hosts thought we would be more comfortable being together. After even more discussion we still aren’t sure what this says about us Americans.

No one wants to be the loud, obnoxious, Ugly American who confirms every single negative stereotype that every single European has ever had of us. The idea is to blend in, not attract attention. However, despite our best efforts, at every turn at the cartoon festival in St-Just-le-Martel in France, our small contingent of American cartoonists couldn’t disguise our heritage.

The leader of our group, Daryl Cagle, was the best at projecting a certain Continental sophistication. He had been to the Festival the year before and had learned the trick to appearing world-weary; he knew how to say "bastards!" in French.

French cartoonists would ask, "Dare-eel, what do you zink of zee shut down of American government?"

It covered about half of Daryl’s conversational requirements over the festival’s three days.

The rest of us, however, were unfamiliar with this trick. We had to communicate with our French colleagues through grins, pantomime, and embarrassing silences following what, we thought, were clever "bon (good) mots". Curiously, there was little resort to drawing as a means to bridge the gap.

There were also the times when we loudly proclaimed our rube-ness. Bob Engelhart, a cartoonist from Connecticut, was there with his wife, Pat. A dead ringer for a Walter White from "Breaking Bad", Bob and I spent the first meal served us in St. Just (all the meals are communal over the course of the festival, sometimes serving over 300 at a time) praising the quality of the chicken.

"This is real chicken!" I assured my son, Alec, about the flavorful and reddish thighs we were eating. "Not like those from factory farms." I was seconded by Bob, who had grown up, he told us, in the country. "Yep, that’s the real deal!"

Through gestures and making loud, "mmm-mmm!" sounds we asked our hosts what kind of chicken it was.

"Canard Limousin", they told us.

We nodded our appreciation at this fine variety of chicken. Then one of the few French words I actually knew bubbled up through some atrophied neural connections into consciousness. "Limousin" referred to the region of France we were in, but "canard" . . .

The next night we were dropped off at our hotel around midnight only to find there was no one at the front desk to let us in. We pushed the button which should have roused someone, to no effect. We pounded on the door and groused at the inefficiency of the European service economy.

A group of French people also arrived a few minutes later and we gestured and pantomimed our conviction that nothing worked. They called the emergency phone number listed on the door (despite having made arrangements with our phone carriers, none of the American cell phones worked as advertised). After a few "ouis" and an eye-roll, our French savior pulled out his room card key and flashed the bold numbers printed under the bold word: CODE. We looked at our card keys. We also had the word CODE followed by the same numbers.

Which worked just dandy on the front door key punch.