Slaves of the Internet, Unite!

Tim Kreider in the Opinion section of The New York Times 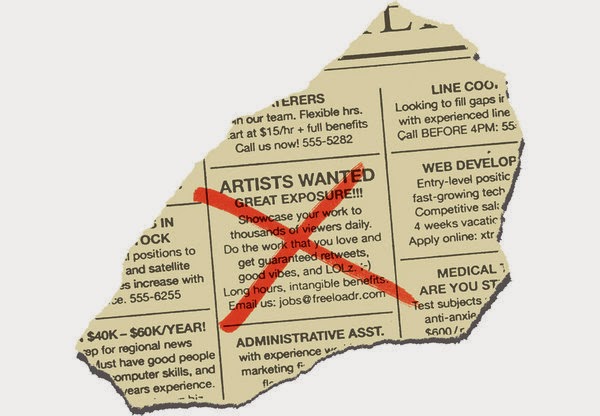 NOT long ago, I received, in a single week, three (3) invitations to write an original piece for publication or give a prepared speech in exchange for no ($0.00) money. As with stinkbugs, it’s not any one instance of this request but their sheer number and relentlessness that make them so tiresome. It also makes composing a polite response a heroic exercise in restraint.


People who would consider it a bizarre breach of conduct to expect anyone to give them a haircut or a can of soda at no cost will ask you, with a straight face and a clear conscience, whether you wouldn’t be willing to write an essay or draw an illustration for them for nothing. They often start by telling you how much they admire your work, although not enough, evidently, to pay one cent for it. “Unfortunately we don’t have the budget to offer compensation to our contributors...” is how the pertinent line usually starts. But just as often, they simply omit any mention of payment.

A familiar figure in one’s 20s is the club owner or event promoter who explains to your band that they won’t be paying you in money, man, because you’re getting paid in the far more valuable currency of exposure. This same figure reappears over the years, like the devil, in different guises — with shorter hair, a better suit — as the editor of a Web site or magazine, dismissing the issue of payment as an irrelevant quibble and impressing upon you how manyhits they get per day, how many eyeballs, what great exposure it’ll offer. “Artist Dies of Exposure” goes the rueful joke.

In fairness, most of the people who ask me to write things for free, with the exception of Arianna Huffington, aren’t the Man; they’re editors of struggling magazines or sites, or school administrators who are probably telling me the truth about their budgets. The economy is still largely in ruins, thanks to the people who “drive the economy” by doing imaginary things on Wall Street, and there just isn’t much money left to spare for people who do actual things anymore.

This is partly a side effect of our information economy, in which “paying for things” is a quaint, discredited old 20th-century custom, like calling people after having sex with them. The first time I ever heard the word “content” used in its current context, I understood that all my artist friends and I — henceforth, “content providers” — were essentially extinct. This contemptuous coinage is predicated on the assumption that it’s the delivery system that matters, relegating what used to be called “art” — writing, music, film, photography, illustration — to the status of filler, stuff to stick between banner ads.

Just as the atom bomb was the weapon that was supposed to render war obsolete, the Internet seems like capitalism’s ultimate feat of self-destructive genius, an economic doomsday device rendering it impossible for anyone to ever make a profit off anything again. It’s especially hopeless for those whose work is easily digitized and accessed free of charge. I now contribute to some of the most prestigious online publications in the English-speaking world, for which I am paid the same amount as, if not less than, I was paid by my local alternative weekly when I sold my first piece of writing for print in 1989. More recently, I had the essay equivalent of a hit single — endlessly linked to, forwarded and reposted. A friend of mine joked, wistfully, “If you had a dime for every time someone posted that ...” Calculating the theoretical sum of those dimes, it didn’t seem all that funny.

I’ve been trying to understand the mentality that leads people who wouldn’t ask a stranger to give them a keychain or a Twizzler to ask me to write them a thousand words for nothing. I have to admit my empathetic imagination is failing me here. I suppose people who aren’t artists assume that being one must be fun since, after all, we do choose to do it despite the fact that no one pays us. They figure we must be flattered to have someone ask us to do our little thing we already do.

I will freely admit that writing beats baling hay or going door-to-door for a living, but it’s still shockingly unenjoyable work. I spent 20 years and wrote thousands of pages learning the trivial craft of putting sentences together. My parents blew tens of thousands of 1980s dollars on tuition at a prestigious institution to train me for this job. They also put my sister the pulmonologist through medical school, and as far as I know nobody ever asks her to perform a quick lobectomy — doesn’t have to be anything fancy, maybe just in her spare time, whatever she can do would be great — because it’ll help get her name out there.

Maybe they’re asking in the collaborative, D.I.Y. spirit that allegedly characterizes the artistic community. I have read Lewis Hyde’s “The Gift,” and participated in a gift economy for 20 years, swapping zines and minicomics with friends and colleagues, contributing to little literary magazines, doing illustrations for bands and events and causes, posting a decade’s worth of cartoons and essays on my Web site free of charge. Not getting paid for things in your 20s is glumly expected, even sort of cool; not getting paid in your 40s, when your back is starting to hurt and you are still sleeping on a futon, considerably less so. Let’s call the first 20 years of my career a gift. Now I am 46, and would like a bed.

Practicalities aside, money is also how our culture defines value, and being told that what you do is of no ($0.00) value to the society you live in is, frankly, demoralizing. Even sort of insulting. And of course when you live in a culture that treats your work as frivolous you can’t help but internalize some of that devaluation and think of yourself as something less than a bona fide grown-up.

I know I sound like some middle-aged sourpuss who’s forgotten why he ever wanted to do this in the first place. But I’m secretly not as mercenary as I’m trying to pretend. One of the three people who asked me to do something for nothing that dispiriting week was a graduate student in a social work program asking me if I’d speak to her class. I first sent her my boilerplate demurral, but soon found myself mulling over the topic she’d suggested, involuntarily thinking up things to say. I had gotten interested. Oh, dammit, I thought. I knew then I was going to do the talk. And after all, they were student social workers, who were never going to make much money either because they’d chosen to go into the business, which our society also deems worthless, of trying to help people. Also, she was very pretty.

“Let us not kid ourselves,” Professor Vladimir Nabokov reminds us. “Let us remember that literature is of no practical value whatsoever. ... ” But practical value isn’t the only kind of value. Ours is a mixed economy, with the gift economy of the arts existing (if not exactly flourishing) within the inhospitable conditions of a market economy, like the fragile black market in human decency that keeps civilization going despite the pitiless dictates of self-interest.

My field of expertise is complaining, not answers. I know there’s no point in demanding that businesspeople pay artists for their work, any more than there is in politely asking stink bugs or rhinoviruses to quit it already. It’s their job to be rapacious and shameless. But they can get away with paying nothing only for the same reason so many sleazy guys keep trying to pick up women by insulting them: because it keeps working on someone. There is a bottomless supply of ambitious young artists in all media who believe the line about exposure, or who are simply so thrilled at the prospect of publication that they’re happy to do it free of charge.

I STILL remember how this felt: the first piece I ever got nationally published was in a scholarly journal that paid in contributors’ copies, but I’ve never had a happier moment in my career. And it’s not strictly true that you never benefit from exposure — being published in The New York Times helped get me an agent, who got me a book deal, which got me some dates. But let it be noted that The Times also pays in the form of money, albeit in very modest amounts.

So I’m writing this not only in the hope that everyone will cross me off the list of writers to hit up for free content but, more important, to make a plea to my younger colleagues. As an older, more accomplished, equally unsuccessful artist, I beseech you, don’t give it away. As a matter of principle. Do it for your colleagues, your fellow artists, because if we all consistently say no they might, eventually, take the hint. It shouldn’t be professionally or socially acceptable — it isn’t right — for people to tell us, over and over, that our vocation is worthless.

Here, for public use, is my very own template for a response to people who offer to let me write something for them for nothing:

Thanks very much for your compliments on my [writing/illustration/whatever thing you do]. I’m flattered by your invitation to [do whatever it is they want you to do for nothing]. But [thing you do] is work, it takes time, it’s how I make my living, and in this economy I can’t afford to do it for free. I’m sorry to decline, but thanks again, sincerely, for your kind words about my work.

Feel free to amend as necessary. This I’m willing to give away.


Tim Kreider is the author of “We Learn Nothing,” a collection of essays and cartoons.
Published by Bado at 4:00 AM

Email ThisBlogThis!Share to TwitterShare to FacebookShare to Pinterest
Tags : Satire