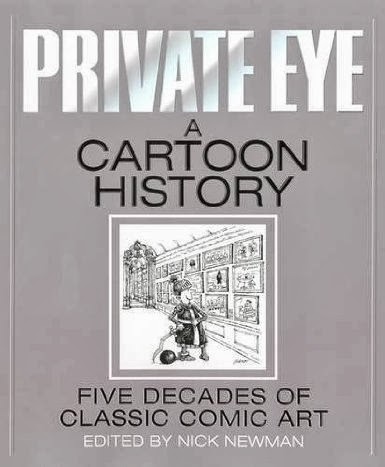 Fans of Private Eye cartoons were in for a treat last September, as editor Ian Hislop and cartoonist Nick Newman took to the stage for two separate events looking back over 50 years of visual humour in the magazine – where they picked out a few favourite gags and discussed the challenge of selecting the cartoons that make it into the magazine.

Monday night saw the pair speak to a packed auditorium at the National Theatre on London’s South Bank. On Thursday, they were joined for their appearance at the Soho Literary Festival by Richard Ingrams, Hislop’s predecessor at the Eye and now editor of The Oldie.

The talks were scheduled to coincide with the launch of Private Eye: A Cartoon History, a handsome new hardback book edited by Newman and containing more than 1000 of the best cartoons published by the magazine over the last five decades. Ingrams was promoting his latest collection of Oldie cartoons, also published this month.

Hislop and Newman began their National Theatre talk by looking back at some of the Eye cartoons that have gone on to become classics, including drawings by Willie Rushton, Martin Honeysett, Michael Heath, John Kent and Ed McLachlan. They observed that cartoons became increasingly surreal and absurd during the 1970s – with the giant hedgehog being a case in point – and Newman noted that many of the best political cartoons have not made it into his book because their impact has been lost over time.

Libby Purves, the journalist, broadcaster and Procartoonists.org patron, was on hand to steer the conversation. She pointed out that there still seems to be life in cartoonist cliches such as the desert island and the suicidal man-on-ledge. Hislop agreed, observing that “Private Eye is nothing if not repeated jokes with slight twists.” He referred to two recent psychiatrist’s couch gags, both by Procartoonists.org member Royston Robertson, which played with the formula and made it into the magazine.

More generally, Hislop praised gag cartoonists for their ability to distil their observations of the world around them into pithy and memorable scenes. “They’ve observed it, frozen it, and made it more or less permanent,” he said.


The issue of ‘bad taste’ was raised when a cartoon by PCOer Alexander Matthews was met by explosive laughter – and some gasps. Purves asked where Hislop draws the line when it comes to offending his readership.

“I always have to be able to justify it – to myself, if to no one else,” said Hislop. “And sometimes there are things that might offend people, but that you think just have to be said. We got a lot of complaints about this cartoon, but I just thought it was incredibly funny.”

Newman explained to the crowd that a cartoonist’s life can be defined by whether he or she is able to cope with having most of their work rejected on a regular basis. He also agreed with Purves’ observation that there are fewer high-profile markets for cartoons these days, following the demise of Punch and with newspapers not currently running standalone gags.

Hislop said that “without Matt, The Telegraph would be in real trouble”, and argued that readers would welcome non-topical joke cartoons in the newspapers. “Editors are missing a trick; cartoons are not expensive,” he said, turning to Newman with a threatening grin before adding: “and they’re getting cheaper next week!”. We hope he was joking. 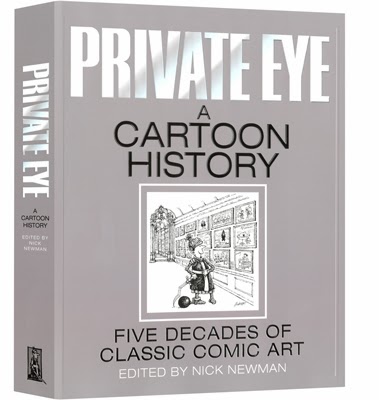 “I’ve got a much smaller book, but it’s also a lot cheaper,” said a deadpan Ingrams of his Oldie paperback collection, when he joined the others on stage at the Soho Theatre on Thursday. “Nick’s book is terribly good, but you can’t take it into the toilet – my book you can.” 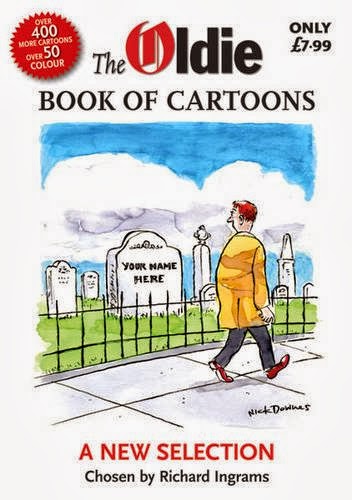 The presence of Ingrams at this second talk meant more anecdotes about the 1960s satire boom – for example that it was Willie Rushton who persuaded Gerald Scarfe to stop drawing desert island gags and have a go at caricature.

But Ingrams was also keen to talk about the current crop of cartoonists, and his slideshow of gags from the Oldie book included one or two from younger talents, among them the cartoon below by Procartoonists.org member Huw Aaron. 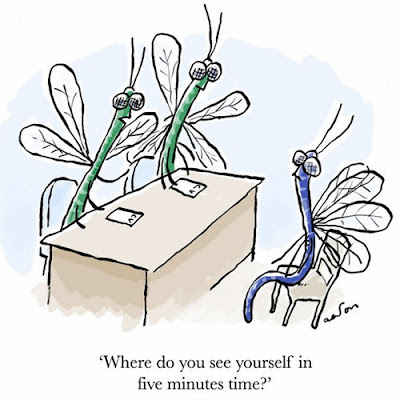 Hislop explained that the sheer number of cartoons flooding in to the Eye means he is required to make quick decisions over what to publish.

“When I choose cartoons, I think ‘is that funny?’, rather than ‘is it beautifully drawn?’,” said Hislop. Ingrams agreed, but added that the drawing itself should be amusing, not simply the idea behind it.

“Cartoonists don’t realise that they’re probably the most important part of a magazine,” said Ingrams, citing a recent readership survey in which roughly 80% said that cartoons were their favourite part of The Oldie.

Both talks were packed and the audiences were extremely appreciative, filling the room with laughter at pretty much every cartoon shown – and with several jokes even eliciting a round of applause.