"Fight the Power!: A Visual History of Protest Amongst the English Speaking Peoples"

From The New Internationalist 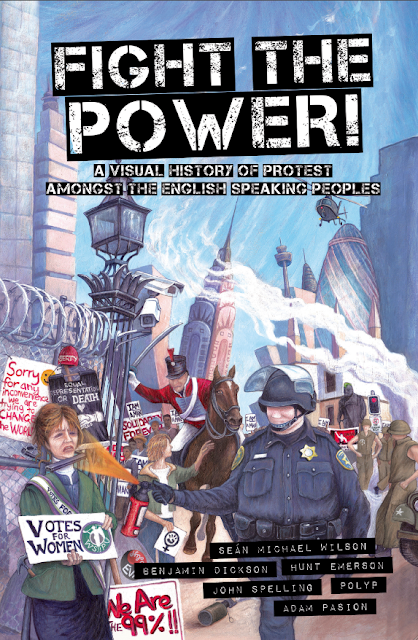 Today’s occupy movements are part of a long history of struggle. This book visualises key moments in history where ordinary people have risen up and fought governments, corporations, even empires. When the 99% have stood up to combatexploitation and abuse or in pursuit of freedom of action and a better life. In other words, to show times in history, just like today, when people have struggled forward to FIGHTTHE POWER!

This comic book covers 14 cases of such struggle over the last 200 years and in several English speaking countries including not just the US and UK but Australia, Canada, South Africa, Ireland, India and Jamaica.

Sean Michael Wilson is a comic book writer from Scotland, who now lives in Japan. He has had more than a dozen books published with a variety of US, UK and Japanese publishers. His book with War on Want, Iraq :Operation Corporate Takeoverwas widely reported on by a variety of mainstream agencies. He is also the editor of the critically acclaimed collectionAX:alternative manga (one of Publishers Weekly’s Best ten books of 2010).

Benjamin Dickson is a writer whose previous works include the apocalyptic graphic novel Falling Sky (awarded “Best Indie Surprise 2006” and named one of the best graphic novels of the decade by Ain’tIt Cool News), and the science fiction thriller Slumdroid, currently being published by Scar Comics. He has had short stories published by Self Made Hero, Ctrl Alt Shift and Heavy Metal, and also worked on 1001 Graphic Novels to Read Before You Die.

Hunt Emerson is a cartoonist living and working in Birmingham, England. He was closely involved with theBirmingham Arts Lab of the mid-to-late 1970s, and with the British underground comics scene of the 1970s and 1980s. The Emerson graphic novels Lady Chatterley’s Lover, The Rime of the Ancient Mariner, Casanova’s Last Standand other adaptations of classic novels and tales have been successfully sold in numerous countries, and translated into several different languages.

John Spelling grew up in Devon, England amidst undulating green hills and second-hand book shops. Quickly realising he loathed writing C.V.s and committing a fixed definition of himself to paper, and was therefore unlikely to get “a proper job”, he studied illustration. For years he has dabbled on the edges of the comics industry, viewing it as something well suited to an insomniac with limited social skills. He still hates writing about himself. Even in third person. He owns no cats.
Adam Pasion was born in San Jose, California and has been drawing comics since he could grip a pen. He graduated with a degree in history from Azusa Pacific University, and currently resides in Nagoya, Japan where he works as a cartoonist, illustrator and designer. His recent work has been published inThe Japan Times, Hyper Hobby Magazine, Japanzine and several other publications. He is the founder of the Uzomuzo art collective in central Japan and has also published several comic books and graphic novels through his own independent imprint,Biguglyrobot. More of his work can be seen at biguglyrobot.net

Radical political cartoonist and activist Polyp has been working with campaigning organizations around the world for over 15 years, and is the author and illustrator of Big Bad World Cartoon Molotovs in the face of corporate rule and illustrator ofSpeechless: World History Without Words. He lives and works within a large Co-operative housing block in Manchester, UK.
Published by Bado at 4:00 AM