From The New York Times 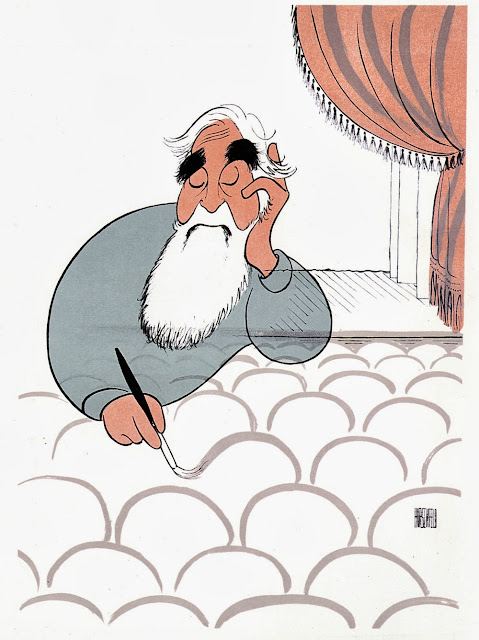 “The Line King’s Library” an exhibition of Al Hirschfeld's art at Lincoln Center from October 17 through January 4, 2014.

There was a time on Broadway when “to be Hirschfelded” meant you’d earned the right to burst out the stage door and scream, “I made it!” Al Hirschfeld, who died in 2003 at 99, was a master illustrator whose line drawings were highly coveted by performers who dreamed of being depicted in his signature squiggles and swoops. During a career that spanned over 80 years, his work appeared in the pages of The New York Times, on the walls of the Museum of Modern Art and on album covers, movie posters and postage stamps.

“The Line King’s Library” opened on Thursday at the New York Public Library for the Performing Arts at Lincoln Center. David Leopold, an archivist at the Al Hirschfeld Foundation, was guest curator for the show, which features rarely seen illustrations, posters, advertisements and prints from the library’s own collection. Together, they are a snapshot of American theater in the 20th century.

Erik Piepenburg spoke with four performers who are featured in illustrations in the show about what it meant to be “Hirschfelded.” (All of the works appeared in The Times.) Following are excerpts from the conversations.

“When I played at the Algonquin and was caricatured, I was overwhelmed. It was one of the most exciting things for me. I remember the night he came in during my performance and sat there and was sketching. I was nervous. I was probably more nervous at that experience than when Leonard Bernstein came in during that same run. He captured an unbridled joy at what I do. Some people are able to extrapolate the energy or the sound or the essence of something and reimage or reinterpret it. That was Hirschfeld’s gift. I don’t think he understood how he did it, but he knew that he could. That’s not to say that he didn’t work for many years at it, but it became an automatic thing. He moved his hand, and it came out this way. It’s the same as interpreting a song.”

“Like a lot of stuff that happened when I came to ‘Cabaret,’ I had no idea of the cultural importance of him. Everyone was freaking out about the drawing. But now I know more about him and how amazing he is. I think he really captured the spirit of the production. I don’t feel like I don’t look like myself. I look like some sort of gnarling Weimar gazelle. I remember [the co-star] Natasha's [Natasha Richardson] big eyelashes. We’re all exploding out of the picture. He captures a moment in my life that is really accurate because I felt like I was exploding like a gazelle. I wonder, if he was alive today, if he’d do that again. Maybe I’d be a slightly less agile gazelle.”

“He used to sit in the audience with a pencil and he would draw right there what he saw on the stage. He would sit on the aisle and, oh, boy, he got it. For Dolly, he drew me with two itty-bitty eyes and a huge mouth. That’s when I began wearing longer eyelashes and a lower line under the eye. I think he exaggerated, but everybody says no, that’s you. I didn’t know I was exaggerated. I mean, I thought I looked normal. But I’m proud. I’m glad that I have that individual a look. It sure is a funny image, but I don’t see where it’s me. It’s such an honor, I don’t care what I look like. To be Hirschfelded is the greatest honor an actor can have.”

“He always got my body right. It was already a caricature. I was already physically abstract. At times, my face looked like Donny Osmond and sometimes like Lily Tomlin. He always gave me a smile. He did me a lot because I think I inspired him. I would go into the studio and practiced to see if I could look like his drawings.”


A version of this article appears in print on October 18, 2013, on page C30 of the New York edition with the headline: How It Felt to Be Caught in the Act.
Published by Bado at 4:00 AM