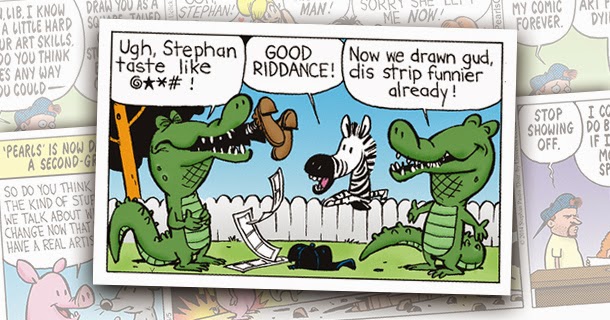 On Monday night, after he and I did a public Q&A for nearly 500 people at The Washington Post building, Stephan Pastis— acclaimed author of “Pearls Before Swine” and bestselling author of the “Timmy Failure” books — made a few self-deprecating jokes about his own drawing ability. Because Pastis and “Calvin and Hobbes” creator Bill Watterson have confirmed this exclusive report (below), I can now say: Pastis has just executed a gift at “drawing” that few cartoonists can top:
1. Amazingly, he drew the long-retired, once-reclusive Watterson … out of retirement — and got him to create fresh art for this week’s “Pearls”; and
2. Pastis managed to draw out his Watterson-week storyline brilliantly, layering humor upon meta-humor in a hilarious house-of-mirrors reflection on the comic-strip industry past and present. Has anyone in recent memory drawn such feats as that? It is special to have Watterson back into the comic-page spotlight, even if only for a few wonderful days.
–M.C.

At the end of 1995, the beloved “Calvin and Hobbes” sledded off the comics page for the final time, and its long-reclusive legendary creator, Bill Watterson, retired from the business, never to draw another syndicated newspaper strip.

This week, the millions of readers across generations who have pined for the cartoonist’s return got a sudden glimmer. Turns out, Watterson’s brilliant artistic hand has recently been hiding in plain sight. Readers don’t need to go back a couple of decades to see his latest work; they need only go back, say, a couple of days. That’s because Watterson has returned home to the comics page — even if only for a limited engagement.

Yes, you read that right. For three days, Watterson — once known as the J.D. Salinger of the strips — has resurfaced, his inspired visual wit intact. For this, we have Stephan Pastis’s real estate and surreal humor to thank.

Since Wednesday, Watterson’s new artwork has been featured in Pastis’s syndicated strip, “Pearls Before Swine.” It’s a creative collaboration that stunned Pastis, who says that he sooner expected to team up with “Peanuts” creator Charles M. Schulz. “And yes,” Pastis says slyly, “I am aware that Schulz is dead.”

Watterson has long eschewed most interviews and publicity photos — he once made Time magazine’s list of most-reclusive celebrities, sandwiched between Syd Barrett and Thomas Pynchon. Working with him, Pastis tells me, “is like getting a call from Bigfoot.”

So what, exactly, lured Watterson back to the page for the first time since ending his immensely popular boy-and-tiger comic in December of 1995?

“Several years ago, when Stephan did one of his strips that mocked his own drawing ability and mentioned my strip in comparison, I thought it might be funny for me to ghost ‘Pearls’ sometime, just to flip it all on its head,” the goateed Watterson tells me, offering a clear indication that he still follows the funnies. “It was just a silly idea, and I didn’t know Stephan, so I never pursued it, and years went by.”

Earlier this year, Watterson says, Pastis got in touch with him when the “Pearls” author was in the Cleveland area on his book tour (though the two didn’t meet then). At the same time, Watterson says, he knew that editor/designer Chris Sparks was looking for new ways to raise money for Team Cul de Sac, a charity co-founded by Sparks and cartoonist-illustrator Richard Thompson that raises funds to fight Parkinson’s disease, in coordination with the Michael J. Fox Foundation.

“Somehow the juxtaposition clicked on a light bulb,” Watterson says.

Thompson, a longtime Washington Post artist who lives in Arlington, Va., ended his Reuben Award-winning syndicated strip “Cul de Sac” in 2012 as he underwent therapy and surgery to treat his Parkinson’s; Watterson is an enormous fan of Thompson’s, and the two now have a dual exhibit at Ohio State University’s Billy Ireland Cartoon Library & Museum in Columbus.

“I thought maybe Stephan and I could do this goofy collaboration and then use the result to raise some money for Parkinson’s research in honor of Richard Thompson,” Watterson tells me. “It just seemed like a perfect convergence.”

“So I explained the idea to Stephan,” Watterson says, “and he was more than happy to give it a shot.”


Both in person and on the page, Pastis — a recent Reuben Award finalist and best-selling “Timmy Failure” author — is self-deprecating about his artistic prowess. So the conceit in this week’s strips is that a second-grader named Libby (a name that nods to “Bill”) boasts that she can draw “Pearls” better than the feature’s creator.

Pastis’s cartoon avatar turns over his “stick figure” comic to the girl — who proceeds to render rich worlds of imagination beyond the signature style of the strip. From invading Martians to big-mouthed (and Pastis-devouring) crocodiles, the art brims with the life of Watterson’s expressive line.

The collaboration is a brilliant pairing of strengths, with Watterson illustrating Pastis’s sometimes-meta script. “I think we both got some surprises,” Watterson says. “I didn’t know what he was going to write, and he didn’t know how I was going to draw it.”


From Wednesday through Friday, Pastis ceded his middle panels to Watterson, whose virtuosic art is vivid testament that his talent remains undiminished. Still, Pastis summoned the gumption to offer a few editing changes.

“It was like editing the pope,” Pastis says. “Like telling Michelangelo: ‘David’s hands are too big.’ ” Yet the California-based Pastis suggested minor tweaks to fit the tone and idiosyncrasies of his strip — including the number of “grawlix,” or punctuation characters that represent cartoon profanity, he uses to match the number of letters in his curse words.

Pastis drew Saturday’s “Pearls” himself as a respectful tip of the cap to Watterson, referencing one of the best farewell strips in the history of comics: “Calvin and Hobbes’ ” bittersweet, sledding-into-white-space (and untold adventures) goodbye.


Some true “Calvin” geeks began blogging theories Wednesday, noting visual touches in “Pearls” that piqued their curiosity — were those “Watterson shoes,” or his headlighted spaceships, or his telltale furniture legs? Like pilgrims studying crop circles or Stonehenge, some cartoonists stoked the guessing game.

Fans had reason to be optimistic. Watterson has twice produced public art in recent years: A poster for the recent homage-to-comics documentary “Stripped,” and a painting of a Richard Thompson character that was auctioned off for Team Cul de Sac. 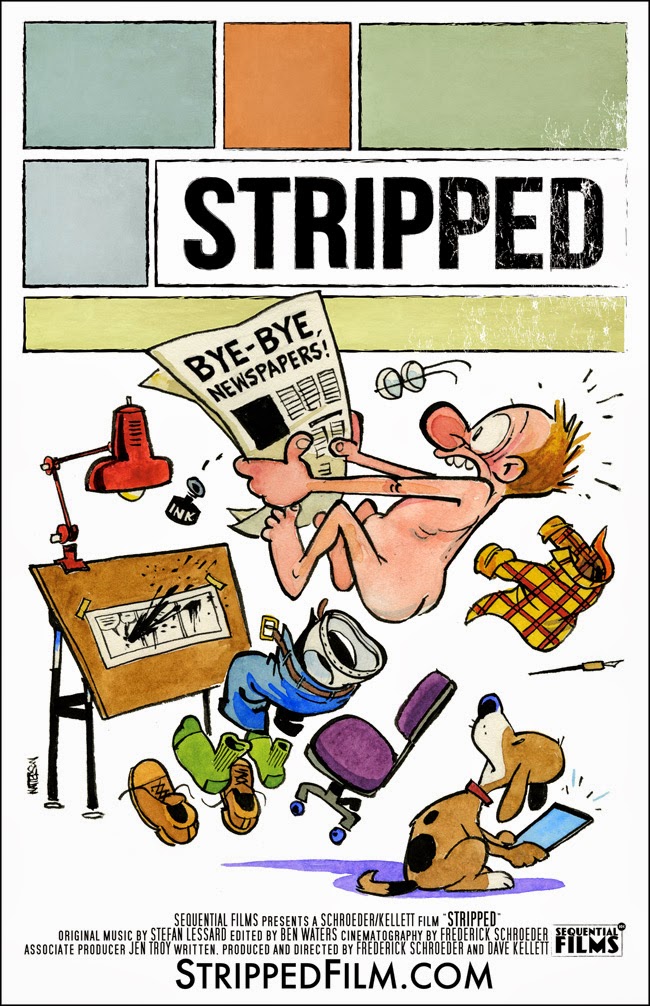 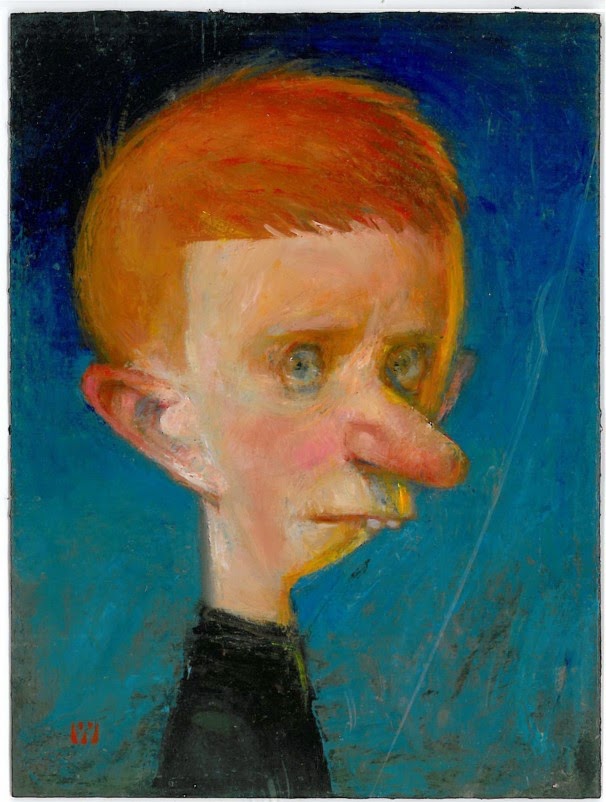 The original “Pearls” strips featuring Watterson’s work — which will be on display at the Heroes Convention (or HeroesCon) later this month in Charlotte — will also be auctioned at some point for the Cul de Sac charity.

“It was generous of Stephan to let me hijack his creation, and more generous still to donate the originals,” says Watterson, adding that he hopes the auctioning “meets with some success.”

As for the experience of collaborating with Pastis, whom he had never met prior to this week, the “Calvin and Hobbes” creator welcomed the challenge of a limited return to the page.

“I had expected to just mess around with his characters while they did their usual things,” Watterson tells me, “but Stephan kept setting up these situations that required more challenging drawings . . . so I had to work a lot harder than I had planned to! It was a lot of fun.”

David Pastis on his collaboration with Bill Watterson in the Pearl Before Swine blog.
Published by Bado at 2:00 AM