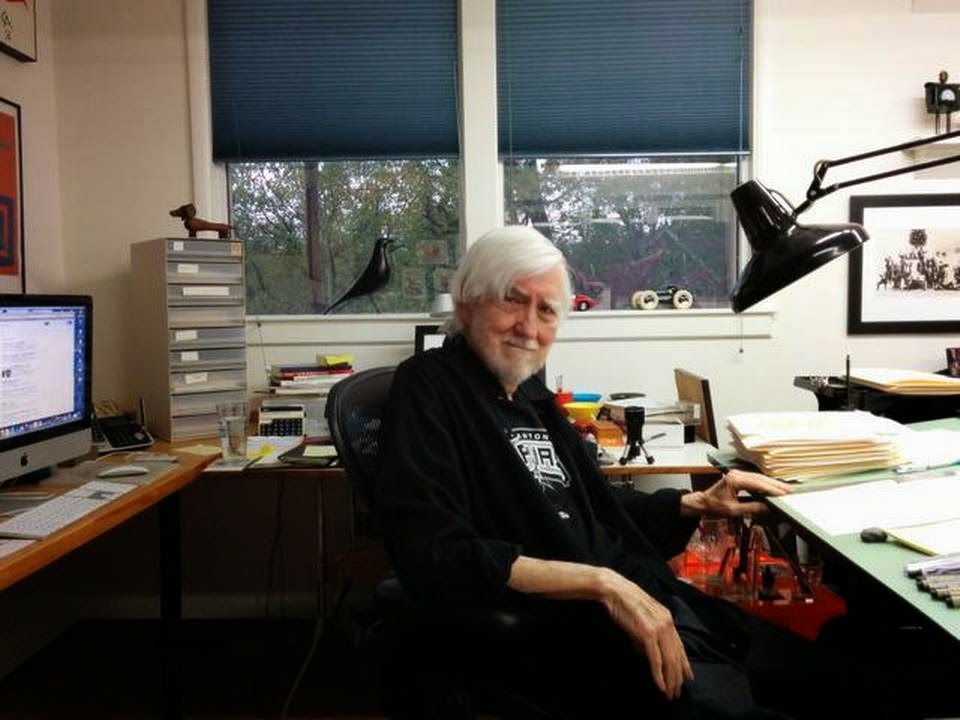 A single-panel cartoon shows an expressionless circus clown talking into the phone and, underneath, just five words: “What’s the next best medicine?” 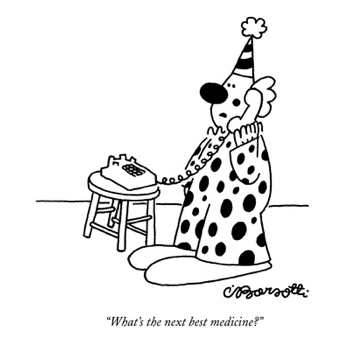 That’s a Charles Barsotti cartoon, one of the many great ones, said Robert Mankoff, cartoon editor of The New Yorker magazine.

“We see his cartoons and think more deeply about things, and we’re also involved in the joke,” Mankoff said. “The next best medicine has always been Charley Barsotti.”

Barsotti, longtime Kansas Citian and cartoonist for The New Yorker for more than four decades, died late Monday at age 80. Barsotti was called a philosopher and “a genius of humor,” and his work drew comparisons to the cartoons of James Thurber.

Barsotti’s wife, Ramoth, said he was diagnosed with brain cancer in March 2013 and had undergone surgery, chemotherapy and radiation. He had been in hospice care for weeks and died comfortably at home, surrounded by family.

Barsotti employed few words to accompany his drawings, much lauded for their simplicity, but they could poke fun, lay bare human foibles and illuminate the poignant. In plump script, “C. Barsotti” appeared under his cartoons.

Barsotti mined most any topic using a variety of comic setups. They included the clipped conversations of kings and aristocrats and a seated therapist remarking to a patient on the couch. One-sided telephone conversations were a forte.

The cartoonist often provided voices to mute things, a gag that gave rise to some of his best-remembered cartoons. He famously drew a piece of pasta — rigatoni, perhaps — talking into the phone: “Fusilli, you crazy bastard! How are you?” 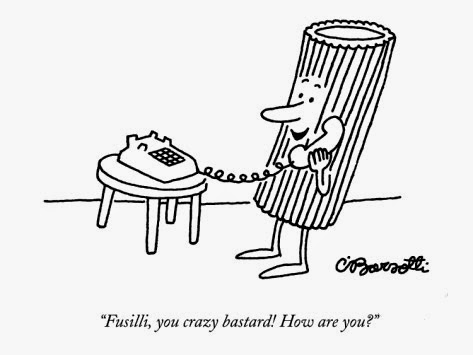 Another of his New Yorker cartoons pictured two forks standing next to each other, one with its prongs wrapped in spaghetti. The other fork says, “I love it. Who did it?” 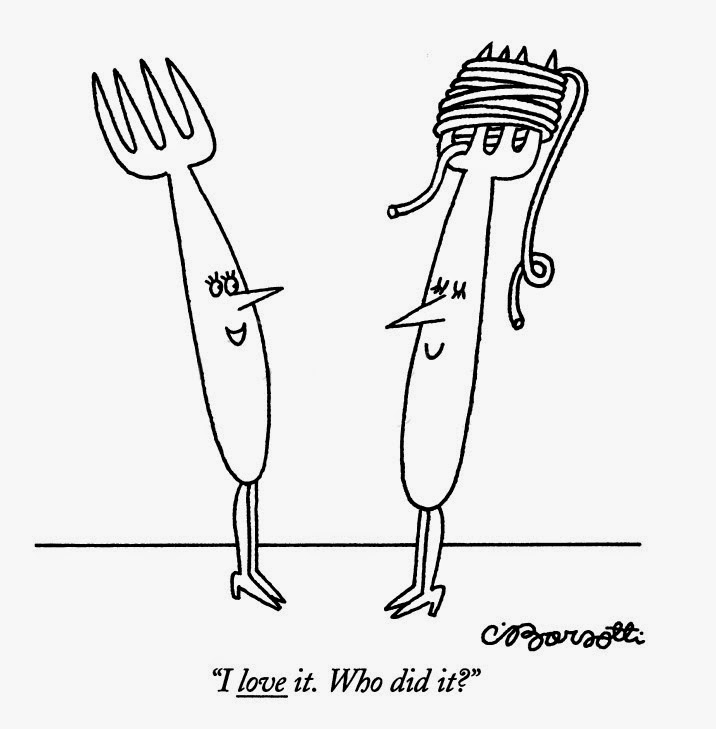 Mankoff called Barsotti “a sweet man and a deep thinker” who sought wisdom, truth and laughter through his cartoons. While Barsotti could do a great gag cartoon, he stood out as a philosopher, he said.

Mankoff pointed to one of Barsotti’s recurring characters, an old pilgrim with a walking stick. In one, the pilgrim is heading in the same direction as an arrow sign that says “Truth,” except instead of walking he’s laboring on a treadmill. In another, one pilgrim is walking in the direction of the truth sign and another is heading back, his face the picture of terror. 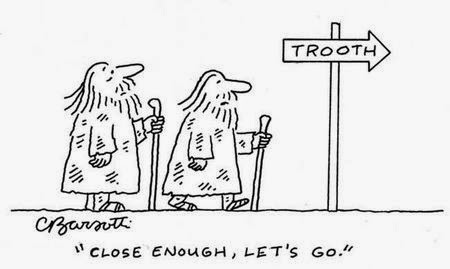 “Through his cartoons he asks the big questions,” he said, “including ‘How do we know what we know?’”

The New Yorker published more than 1,300 Barsotti cartoons. He created many thousands more that appeared widely, including in The Atlantic, USA Today, Texas Monthly and Playboy, and on the op-ed pages of The New York Times and The Kansas City Star.

“He has done an amazing amount of work,” said Ramoth, who organized the business side of the Barsotti cartoon enterprise. They were married for 35 years. “We heard from people from around the world.”

Some of his most popular and cherished panels were his dog cartoons, featured in the 2007 collection “They Moved My Bowl.” 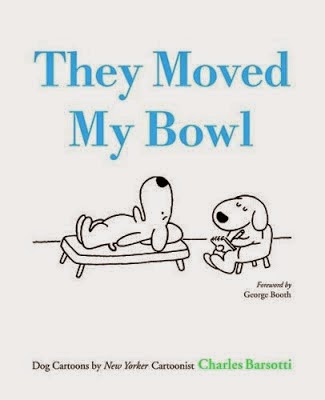 They make up the body of work that daughter Kerry Scott loves the most.

“They are sweet, gentle and they offer a lot of insight into human nature,” she said. “And I think it opened up a whole new audience to his work.”

One such cartoon is framed in his studio at his house on East 55th Street: A dog in the therapist chair says to the teary-eyed patient on the couch, “Well, I think you’re wonderful.” 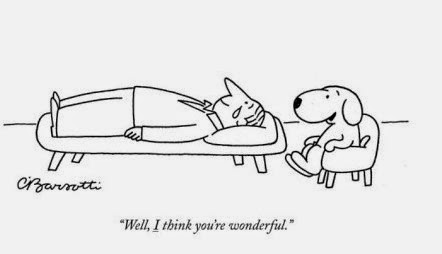 Another, passed frequently among folks who have said goodbye to a pet, pictures an angel logging an older man into heaven. A happy dog bounds toward him, and the angel says, “So you’re little Bobbie; well, Rex here has been going on and on about you for the last 50 years.” 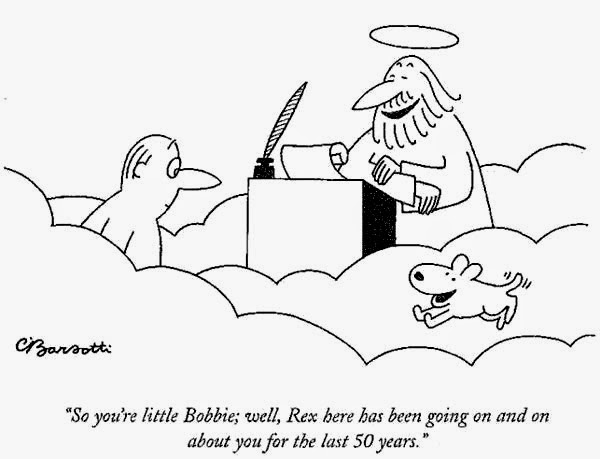 “I think the little dogs that you draw are the funniest cartoons that anyone has been doing in recent years,” Schulz told Barsotti in a letter signed with his nickname, Sparky.

“A wonderful, wonderful person, and a legend in the cartooning world,” McMeel said. “You could sit for hours and talk to Charley. He could get very serious, and then he would send this rocket at you, just to see if you were listening or not. He was fun to be with.”

Barsotti created several comic strips, including “Sally Bananas,” and his cartoons were collected in several other books, including “The Essential Charles Barsotti” and “Barsotti’s Texas.”

After a two-year stint as an Army clerk, he worked for six years as a director at a Texas residential school for people with developmental disabilities, and he began freelance cartooning.

Barsotti had said that he was always a doodler, which wasn’t “considered a plus” in his younger years. But he had long dreamed of becoming a cartoonist, and when he moved to Kansas City to take a greeting-card job at Hallmark, he continued his freelance cartooning.

After several years at Hallmark, Barsotti moved to New York in the late 1960s and was named the cartoon editor of The Saturday Evening Post, but the magazine stopped publishing in 1969. In 1970, he became a staff cartoonist for The New Yorker.

Married with children, Barsotti moved back to Kansas City because it was a “more manageable” place to raise a family.

He had four children with his first wife: Kerry Scott of Kansas City, Wendy Barsotti of Lawrence, Susan Woodward of Overland Park and Michael Barsotti of Kansas City. He and Ramoth were married in 1978, and Barsotti adopted Ramoth’s daughter, Jean. She lives in Kansas City.

A 2007 article in The Star noted that Barsotti was a shy man who wasn’t active in local literary and artistic groups.

“Nobody will have me,” he deadpanned.

Yet that year he appeared with other authors at a fundraising event, Rare Conversations, for the Johnson County Library Foundation. He participated in other such events, including for Share Our Strength to raise money for hunger relief.

“Pretty much whenever anybody asked,” Scott said.

Through the years, Barsotti and his cartoons found national and international acclaim.

In 1986, Barsotti told the Chicago Tribune about an incident a year earlier: Patrick Buchanan, then President Reagan’s newly named communications director, asked for an autographed original of a Barsotti New Yorker cartoon that featured Buchanan.

Barsotti declined, even after Buchanan wrote a letter to him on White House stationery: “It would be much appreciated and would hang in a place of honor either at my residence or in my office — for Sam Donaldson to see. If not, thanks for — as the President might put it — making my day.”

But Barsotti was no fan of the conservative Buchanan and declined.

“Politicians don’t trust you if you give them something for nothing,” Barsotti quipped. “They respect a trade.”

In 1996, at age 62, Barsotti became one of five cartoonists honored in a series of first-class postage stamps issued by the British post office. After approval by a stamp advisory committee, the choices were personally approved by Queen Elizabeth II. Three of the 10 stamps in the series were Barsotti’s. 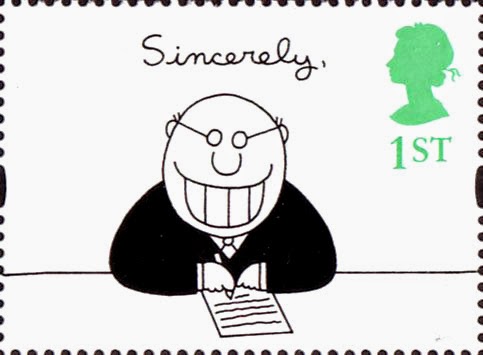 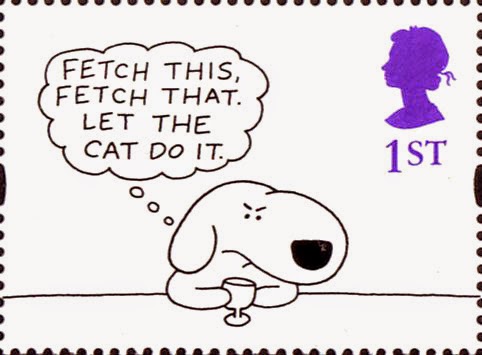 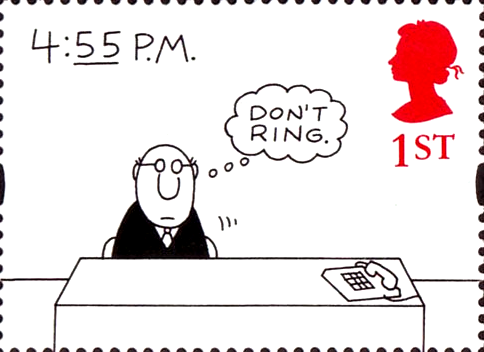 A British designer, Michael Wolff, led the cartoon stamp project, and he had helped introduce the cartoonist’s work in Europe. His cartoons appeared in the humor and satire magazine Punch.

“He really is a man who has a wonderful understanding of human strengths and weaknesses and foibles,” Wolff said. “He carries a little bit on from the (James) Thurber tradition, but his humor is just so poignant and so witty, and so international, really.”

As many have, Wolff lauded Barsotti’s simple drawings.

“Complication is easy, simplicity is incredibly hard,” he said. “He’s a very talented man, a genius of humor really.”

In a detour from his cartoonist’s life, Barsotti ran for Congress in 1972, fueled by the anti-Vietnam war efforts. He won the Democratic nomination for a Kansas district, but he was put off by campaigning.

He decided to “stand for office but not run for it,” he said at the time. “It was a ‘You can vote for me as a protest against the war if you want to’ kind of thing.’” He recalled getting about 30 percent of the vote.

“He felt strongly about it,” Scott said, “but running for office wasn’t really in his wheelhouse.”

Far more than politicking, Barsotti said at the time, cartooning had “a fearsome integrity.”

A funeral is scheduled for 3 p.m. Sunday at All Souls Unitarian Universalist Church, 4501 Walnut St.

Read more here: http://www.kansascity.com/news/local/article567945/Beloved-New-Yorker-cartoonist-Charles-Barsotti-dies-in-Kansas-City.html#storylink=cpy
Published by Bado at 2:00 AM