A review by Don Simpson in The Pittsburg Post-Gazette. 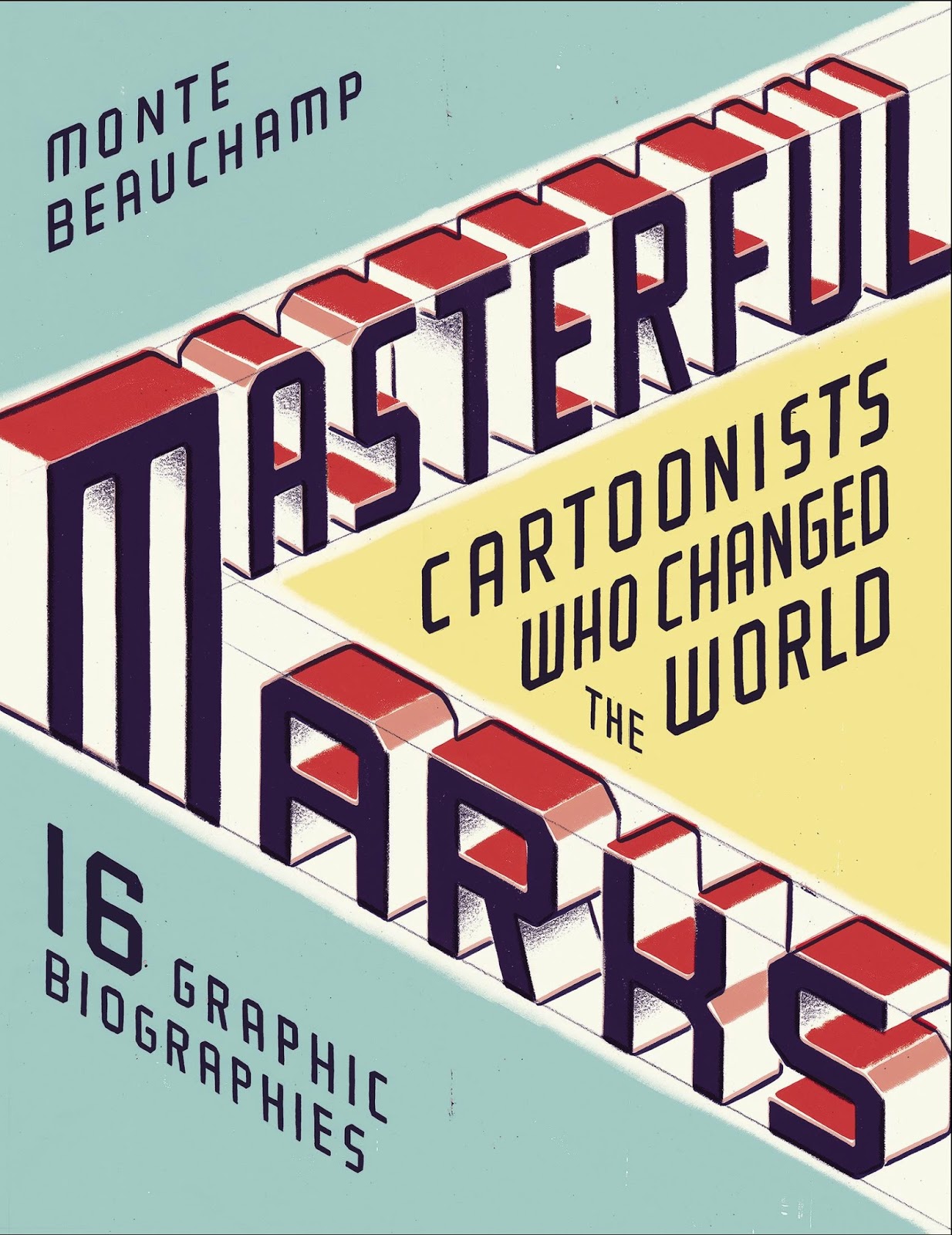 The concept behind Monte Beauchamp’s “Masterful Marks: Cartoonists Who Changed the World” is simple: get 16 contemporary cartoonists to tell the life stories of 16 groundbreaking cartoonists, from youngsters with a compulsion to draw to eventual fame.

The result is a slick and attractive compendium of drawing board history told in a diversity of current styles. Although the 6-to-8 page vignettes take “graphic novel” form, all varieties of cartooning are represented: newspaper comic strips, magazine and book illustration, manga, animation.

Not long ago one would hardly dare to utter the names of such high-class artists as “Peanuts” creator Charles M. Schulz or New York Times Broadway caricaturist Al Hirschfeld in the same breath as low-rent comic book toilers, but here they all are, side by side — a decade or more of big-budget Hollywood films derived from superhero comics, the shrinkage of print media and the elevated critical status of comics having leveled the cultural playing field.

Much of the material will be familiar to fans of comics lore, and Mr. Beauchamp, editor of the volume and scripter of many of its bios, maintains a comic book-centeredness to the collection. (Dr. Fredric Wertham’s mid-century crusade against crime comics as contributors to juvenile delinquency is highlighted four separate times.

The lead-off stories chronicle the careers of Jerry Siegel and Joe Schuster, creators of Superman, and Jack Kirby, who created nearly everything else. Ryan Heshka’s beautiful paintings evoke the Depression-era saga of two Jewish teens from Cleveland who are as romantically challenged and fiscally powerless as their fictional creation is omnipotent.

Superman and spin-offs make millions for their ruthless publisher as the duo sinks further into poverty until the 1970s movie shames Superman’s corporate owners to extend a modest retirement stipend to his creators.

The predicament of Jack Kirby, creator of Captain America and co-creator of Thor, Iron Man, The Avengers, et al., is never as dire, since following his break-up with collaborator Stan Lee, Mr. Kirby never falls out of favor with fans or out of employment with publishers.

Mark Alan Stamaty, whose satiric visual vocabulary is perfectly suited to his snarky “Washingtoons” strip, seems oddly hamstrung in telling Kirby’s story. Without an example illustrating the book’s introduction, the reader would have little idea of the power and majesty of Kirby’s drawing style.

The short stories range from bare recitations of biographical fact to the visually exhilarating. Mr. Beauchamp and Larry Day’s recounting of the career of Walt Disney is told entirely by a chicken with an eye patch to a chick walking across a watercolor landscape, no doubt a strategic choice to avoid entanglements with Disney’s notoriously litigious lawyers.

Drew Friedman’s aptly titled “R. Crumb and Me” is by far the most creative not to mention funny and self-indulgent contribution, as the young fan and art student recalls his close encounters with idols Harvey Kurtzman (creator of “Mad”), Harvey Pekar (writer/creator of “American Splendor”), and Mr. Crumb himself, who has told most of his life story in autobiographical comix already anyway.

The volume closes with Dr. Seuss (a.k.a. Ted Geisel), whose publicity shunned the pejorative “cartoonist,” preferring “beloved children’s book author” instead. Mr. Beauchamp and artist Denis Kitchen eschew such snobbery; their Seuss is a failed comic strip artist who backs into best-selling household-word status in the “juvenile” storybook category only after several flops, with more than his share of tragedy and personal failings along the way.

Mr. Kitchen’s meticulous and distinctive style meshes perfectly with that of the creator of “The Cat in the Hat,” but Geisel’s publicists must be rolling in their graves.

Vignettes on Hugh Hefner and others round out the volume (one might be persuaded that Hef, a failed cartoonist, built his centerfold empire merely to showcase brilliant cartoonists in the pages of “Playboy”).

Perfect holiday gift as there is much to inspire for the next generation of youngster cartoonists (but not too young; a slight amount of nudity and other misbehavior is depicted).


Don Simpson, a cartoonist, holds a Ph.D. in art and architectural history from the University of Pittsburgh.