Pat Oliphant Interviewed in "The Atlantic" 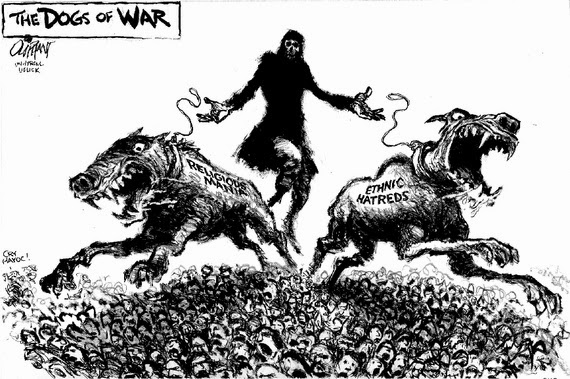 
Has the influence of political cartoons changed while you’ve been doing it?


The influence of cartoonists has diminished greatly, even in the past 10 years. It’s a great disappointment really. It’s a noble and vital sort of art that took about 600 years to develop, going back to Leonardo, and the grotesque figures of Goya. In part, it’s been sabotaged by the newspapers themselves. They’re giving their content away on the Internet and haven’t figured out how to stay in business.

Editors and publishers are a great disappointment. You’ve got editors who don’t read now. I once did a cartoon of Reagan as Johnny Appleseed for a national magazine. Reagan was striding along spreading his seeds and waves of pollution were growing up behind him. The editor didn’t know who Johnny Appleseed was. Everybody used to freely use Shakespearean quotes and apply them to a current problem like, say, indecision. You know, “Alas, poor Yorick.” You can’t do that anymore. You’ll get, “What’s with this guy with the skull?”

Publishers of newspapers don’t want to offend anybody and the editors, their lackeys, are only too happy to play along. Controversy is not welcome in newspapers. Bill Mauldin—along with Herblock and Paul Conrad, he was the pick of the bunch of American cartoonists when I was starting out—saw this coming about 10 or 15 years ago and said, “I don’t want to do this anymore.” It turned out he was right.

There’s another important factor: education. The frames of reference have disappeared. You have to have a frame of reference to appreciate a cartoon, to know what is being caricatured. People don’t do the reading of news anymore that would give them the background to know what the cartoon is about; you can’t refer to accepted wisdom or variations of accepted wisdom. We are in a forest fire of ignorance.

More on this blog:

George Orwell Writes His Literary Agent
Published by Bado at 2:00 AM