"The Coalition Book" by Martin Rowson 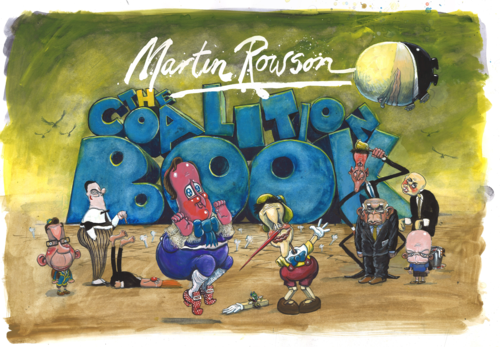 Since 2010, Martin Rowson has been documenting the highs and lows – mainly the lows – of the Tory-Lib Dem coalition week after week in The Guardian, as well as in many other publications. This book collects Rowson’s best, most brutally funny, cartoons from a period that began with a “big, open, comprehensive offer” to Nick Clegg, continued on through riots, phone-hacking, double-dip recession and endless debates on Europe, and will end (perhaps) with the general election in 2015. Accompanied by witty explanatory text, The Coalition Book takes a biting satirical look at Cameron and Clegg’s first – and perhaps last – five years in charge.


Martin Rowson is an author and artist. One of Britain's best-loved cartoonists, he is a regular contributor to The Guardian, the Daily Mirror and The Morning Star. Rowson is the author of several graphic novels, including adaptations of Tristram Shandy (SelfMadeHero) and Gulliver's Travels (Atlantic Books). His prose books include The Dog Allusion: Gods, Pets and How to be Human and The Memoir Stuff. In 2001 Rowson was named London's 'Cartoon Laureate' by the Mayor Ken Livingstone.