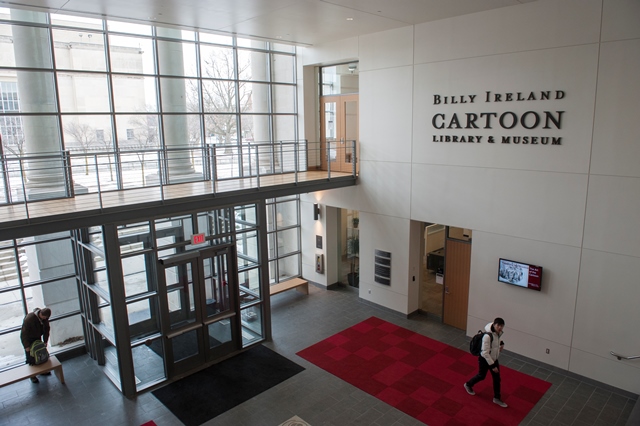 The honor was announced April 17 at SPJ’s annual spring banquet.

BICLM Curator Jenny Robb expressed her gratitude for the designation in the inaugural year of the award.

“Cartoons can play an important role in our democracy by holding our leaders accountable, exposing injustice, and encouraging engagement in civic discourse. The BICLM collection is a unique resource documenting this critical piece of the cultural heritage of American journalism.”

The BICLM was established in 1977 and holds more than 2.5 million newspaper comic strips, 300,000 cartoons and 67,000 comic books. As an Ohio State University Libraries location, BICLM promotes the study and appreciation of cartoon art by sponsoring a variety of educational programs and publications.

A wall of honor will be designated in the Schoonover Center for Communication at Ohio University later this year, recognizing SPJ national historic sites and yearly recognitions of Ohio sites.

The Ohio Journalism Historic Sites Wall of Honor will reside at the E.W. Scripps School of Journalism, with a plaque placed at each historic site designating it as such.
Published by Bado at 6:40 AM