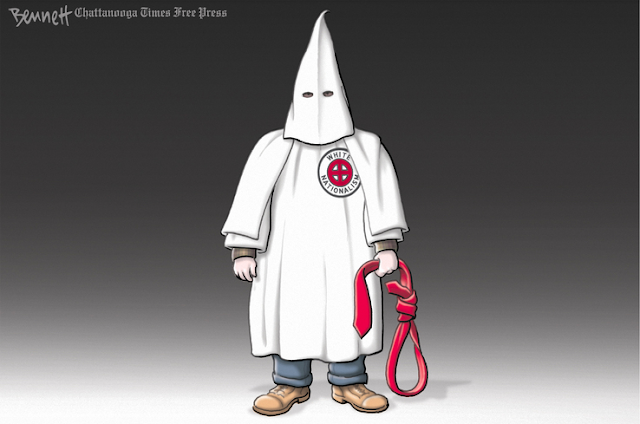 On March 28, Facebook summarily deleted a week-old editorial cartoon by PulitzerPrize-winning political cartoonist Clay Bennett, and then warned him his complaint about the deletion had violated the site's community standards & deleted that.

Bennett's cartoon—shared from Andrews McMeel Syndication's online site GoComics—was swept up in Facebook's hasty effort to remove posts on white nationalism, white supremacy and the KKK. FB apparently made no distinction between those & comments critical of hate groups.

Bennett reported that he appealed the removal of his cartoon and received a denial from Facebook in less than 48 hours. Facebook's actions also deleted the hundreds of shares the cartoon had, as well as a short news item that linked to the cartoon.

It is worth noting that the editorial cartoon was published in the print edition of the Times Free Press, and still appears on the Facebook page of the Chattanooga newspaper 72 hours after the social media site deemed it twice violated their "community standards."