From The News & Observer. 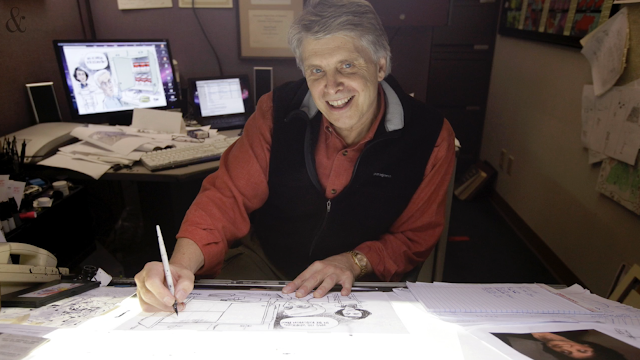 Powell, 74, kept track of current events after he stopped working full time in 2009 and was still skewering elected officials in weekly N&O cartoons until a few weeks before his death.

He had been fighting a rare form of cancer.

Powell was an Arkansas native who grew up on a farm outside the town of McGehee. He went to school at Arkansas Agricultural and Mechanical College — now the University of Arkansas at Monticello — where he played football until a shoulder injury took him off the field.


In an interview at his downtown Raleigh home in March, Powell said he wasn’t much of a student in those days, and he flunked out.

He joined the U.S. Army National Guard and spent a couple of years working for his father before making another run at a degree in agri-business.

He got the parchment, graduating in 1969, but by then was looking far beyond the cotton, rice and soybean fields of rural Arkansas. 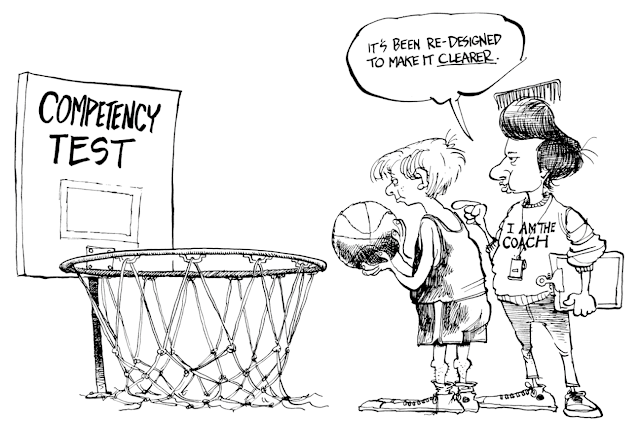 Powell had begun pen-and-ink drawing while at McGehee Senior High, when a counselor gave him the supplies as a way to channel the doodling he was constantly doing anyway.

He did some sketches for the high school yearbook and loved the way it felt to see his work in print, he said. He drew cartoons for the college paper, too.

While in college — the second time — he was approached by the editor of Monticello’s local paper, The Advance-Monticellonian, who had seen some of Powell’s drawings, mostly on napkins, a favored medium throughout his career.

The editor suggested Powell beef up on the political news, pick a topic and draw a cartoon about it. 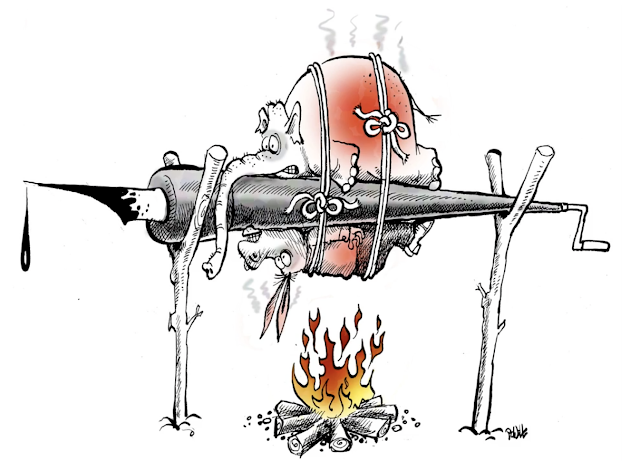 The piece got picked up by the Arkansas Gazette in Little Rock, and Powell was hooked.

He drew Sunday editorial cartoons for the Advance-Monticellonian all the way through his senior year. Most of them, he said, also ran in the Gazette.

After graduation, it took him some time and a series of mismatched jobs to figure out he wanted to work in newspapers. He got hired as a reporter-cartoonist at the Sentinel Record in Hot Springs, then moved to the Cincinnati Enquirer and the San Antonio Light.

By then, he knew he wanted to work at a capital-city newspaper, he said, close to the political action, and he knew he wanted it to be one where his cartoons could lean to the left. He had become especially interested in civil rights issues. 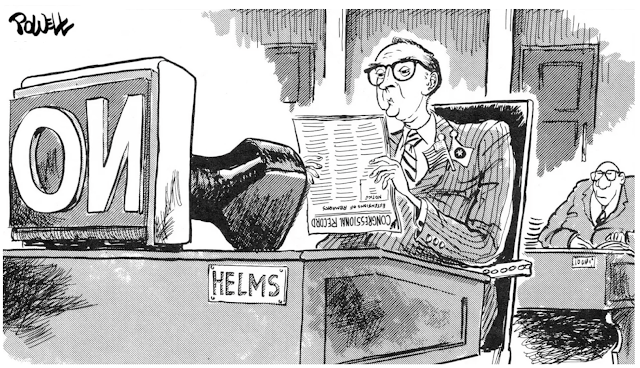 He started at the News & Observer in 1975, two years after Jesse Helms had been elected to represent North Carolina in the U.S. Senate and Jim Holshouser had been sworn in as the state’s first Republican governor since the turn of the century.

“His early work was influenced by MAD Magazine cartoons,” said Mike Keefe, an editorial cartoonist who had a similarly long career at the Denver Post and lives now in Mexico.

“There would be just this crazy stuff going on: birds on heads and construction equipment with human feet. Just things that came out of Dwane’s head. Nobody else did anything like it. He just had a real zany approach. 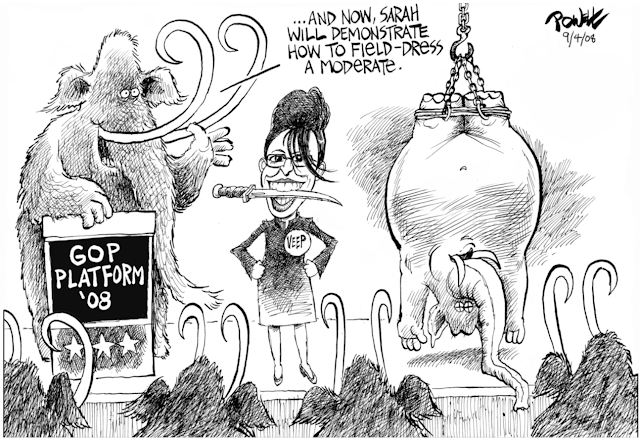 “His cartoons are worth studying. He would make a point about something political, and make it strongly. But you would get lost in the detail. They were always like that,” Keefe said.

“He was unique in that ability to draw you into his piece of art, to laugh at all the pieces of it, some of which were possibly outside the point of the cartoon and just something entertaining to look at.”

Keefe first met Powell at an annual cartoonists’ convention, serious gatherings where most of the nation’s political cartoonists would meet for presentations about syndication and censorship and to grouse about the state of the industry and editors too timid to let their artists take a stand.

There were probably 350 newspaper cartoonists in those days, Keefe said, compared with about 50 now.

From the start, Powell was admired for his caricatures, which came from his ability to exploit a physical trait about someone that everyone else took for granted.

Once he pointed it out, the feature became the person’s editorial-page identity and could have served as a stand-in for them all by itself. 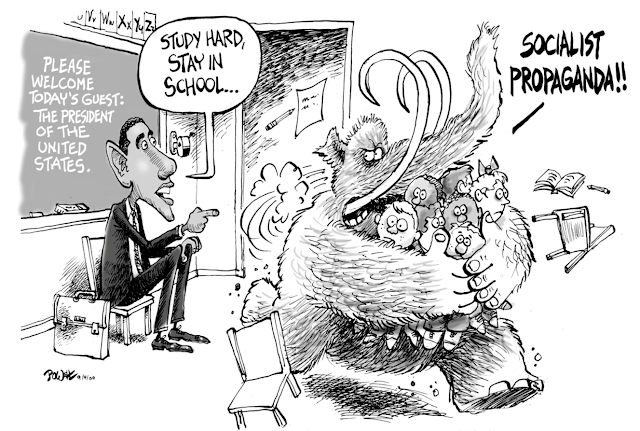 Powell had critics who disagreed with his liberal positions and found his illustrations unamusing, but he had fans even among his targets.

In a collection of his early cartoons published in 1978, Helms wrote a blurb that said he had a wall of beloved Dwane Powell cartoons in his Senate office, and every day when he looked at them, “It reminds me not to take myself too seriously.”

“When Dwane zeroes in, there is no escaping his pen,” Keefe said. “We’d go into a bar and Dwane would latch onto somebody across the room like a laser beam. His eyes would narrow and he’d take a napkin or a corner of a tablecloth and draw a caricature that was just devastating. He didn’t pull any punches.

“None of the rest of us could do that,” Keefe said of his and Powell’s cartooning crowd.

“He could somehow visualize how a face would appear on paper in exaggerated form. And he’s destroyed so many restaurant tablecloths, I just can’t tell you.

He’s drawn on linen napkins and tablecloths around the world. Sometimes the restaurants hang them on the walls.” 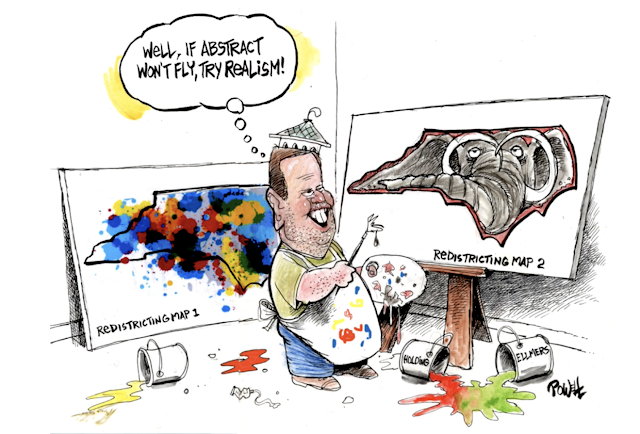 Such creativity was not harnessed on demand. Former N&O editor and reporter Steve Riley, now deputy managing editor for investigations and interim executive editor at the Houston Chronicle, was a longtime friend who marveled at the way Powell worked.

“He would come in late, and he would wander around, get his coffee, look at a few newspapers, go to the Y for a couple of hours,” Riley said. “He was trying to get whatever idea it was he had to percolate.

“Then he would come back to the office, start to circulate some ideas to people on the editorial board, or occasionally come out into the newsroom with them. And then, about 4:30 or 5, he would land on something and go do whatever it was he did to make it work.

“He did that five days a week.” 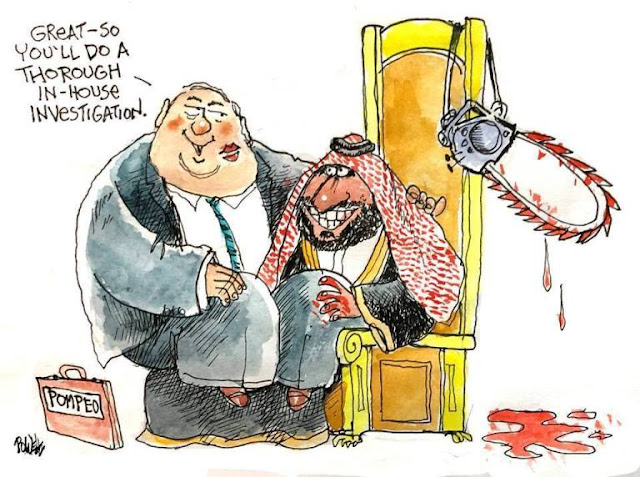 Powell liked to test the boundaries with his editors. In the mid-1990s, Riley recalled, when the News & Observer had been covering environmental problems in the ballooning hog industry, Powell came up with a cartoon of then-Gov. Jim Hunt as the Little Dutch Boy using his finger to hold back the flood.

Only, it was hog effluent that threatened to overflow, and the orifice was on the hog, not in a dike. 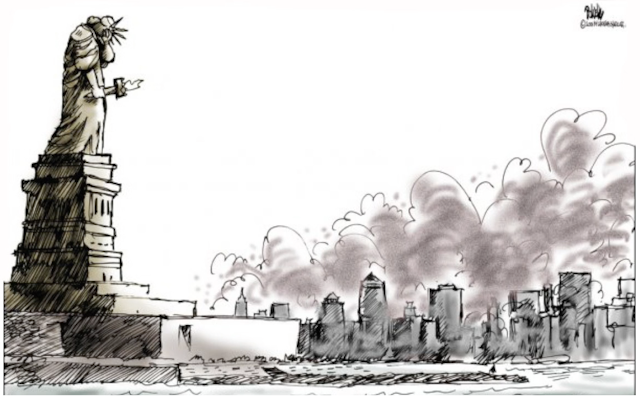 Riley, Keefe, Powell and others took many trips together, usually centered around a sporting event. They were often accompanied by Powell’s wife, Jan, with whom he recently celebrated a 48th wedding anniversary.

When the group traveled, always there would come a moment when it was time to herd everyone — to a car, to a restaurant, to an airport — and they would look around and Powell would be gone.

“We called it Dwaning,” Riley said. “‘Where’s Dwane?’ ‘He’s off Dwaning,’ and you’d have to go find him. He’d be somewhere with his camera, or somewhere drawing.”

Once, on a trip to rural Mississippi, Riley said, when they found him, Powell was playing music in a guitar store in town with a 10-year-old blues wizard.

“He was just engaging as only Dwane could,” Riley said. “He made friends wherever he went.”

In addition to his irrepressible drawing skills, Powell was a solid guitar picker and singer who played frequently with friends in Raleigh as well as with cartoonist-musician friends during conventions and other visits.

He also cycled, cruising miles of local greenways until he got too sick to ride. He had respectable photography skills. 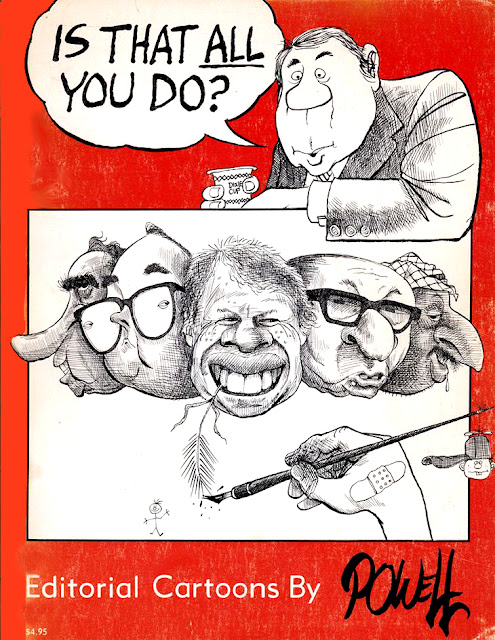 The University of Arkansas at Monticello named him a Distinguished Alumnus. A collection of his work is on exhibit at the City of Raleigh Museum through June.

He said in March he could think of only one cartoon he regretted publishing, because it ridiculed a politician for being overweight in the process of revealing the folly of his policy stance, as Powell saw it.

In addition to his wife, Powell is survived by his daughter, Devon Powell Penny, her husband, Greg, and their son, Myles, of Williston, Vermont.

He was preceded in death by his parents, Drexel Powell and Minnie Louis Powell, and brother, David R. Powell. He had a deep love for his in-laws, cousins, nieces and nephews.