From the Mike Lynch Cartoons blog.


The cartoon highlight of our recent trip to Prince Edward Island was seeing the traveling exhibit of international editorial cartoons titled "Freedom of Expression in Broad Strokes."

In 1993, the United Nations General Assembly declared May 3 as World Press Freedom Day to raise awareness of the importance of freedom of the press and to remind governments of their duty to respect and uphold the right to freedom of expression under Article 19 of the Universal Declaration of Human Rights. The Day is also now used to draw attention to the dangers faced by journalists when reporting the news. In 2010, 87 journalists were killed, while a further 51 were kidnapped, and more than one thousand media workers including cartoonists were physically attacked or threatened with violence while doing their job.

Since 2001, there's been an annual international competition for best editorial cartoon. The cartoons exhibited are all from this contest held by the CCWPF in conjunction with its Press Freedom Award. 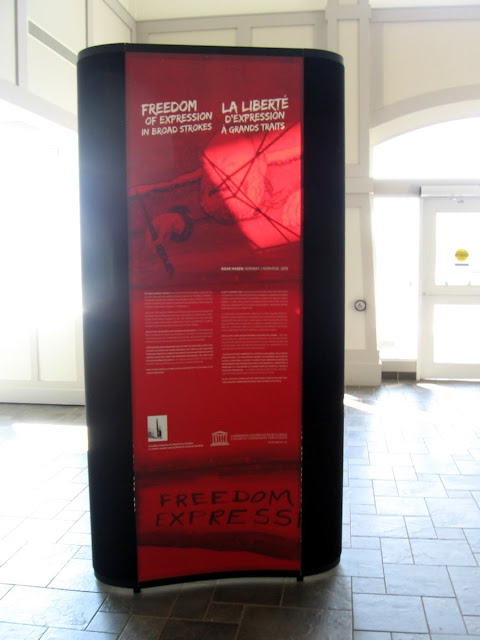 In the lobby of the Stratford Town Centre, the sun streams in and strikes the metal braces that are in the interior of each of these pillars, creating a fenced-in pattern over the image of a cartoonist in shackles, holding an inky brush. It's drawn by Roar Hagen of Norway.


Here are a few cartoons from the exhibit.

Some great cartoons here with stunning use of universal visual metaphors.

The gallery show consists of a series of three-sided freestanding pillars, about eight feet high. Each pillar has three or four editorial cartoon prints on each side, with context for the cartoon and credits.

Looks like these structures can be easily collapsed and transported to the next location.

Well worth seeing just for the breadth of the talent and the international scope.

Thanks to Bado's Blog, here is the "Freedom of Expression in Broad Strokes" exhibition tour schedule:
Published by Bado at 3:00 AM