‘Timely and Timeless’ exhibit at the Library of Congress


There’s nothing, Martha Kennedy enthuses, quite like seeing great comic art in person, nose to frame, pupils to paper.
“Viewers can get up close to see how [the artists] use line color, brush, pen and ink, gouache, pastel...,’ says Kennedy, dwelling a moment, lovingly, on the sound of each medium.
She has every right to be excited. Today, the Library of Congress opens its new exhibit, “Timely and Timeless,” which features four-dozen of the many comic works that the institution has acquired over the past decade.
The works range from caricature to comic strip, magazine illustration to graphic novel. And among the artists represented are past masters Honoré Daumier and James Gillray; “Spider-Man” co-creator Steve Ditko; “The Boondocks” creator Aaron McGruder and “Zippy the Pinhead’s” Bill Griffith ; the New Yorker’s Charles Addams and Roz Chast ; entertainment caricaturist Al Hirschfeld; civil-rights era artistOliver Wendell Harrington; and such Pulitzer-winning editorial cartoonists as Tony Auth and The Post’s Ann Telnaes.
“We were trying as a team to do justice to the amazing variety and quality of our comic acquisitions,” says Kennedy, curator of the exhibit, ”and to try to encompass the major genres of comic art.
“We wanted to create an eye-catching assemblage with all these,” continues Kennedy, who estimates that the library has more than 128,000 comic artworks in its vast collection.
Here is a sampling of the works on display in “Timely and Timeless,” a title that Kennedy says refers both to how keenly some of these works reflect their eras, as well as to the timelessness of the virtuosic pieces. (And no, she adds, no punning allusion to Timely Comics is intended.)
The exhibit at the Graphic Arts Galleries (10 First St. SE) is free and runs through March 10.
.
HONORE DAUMIER: 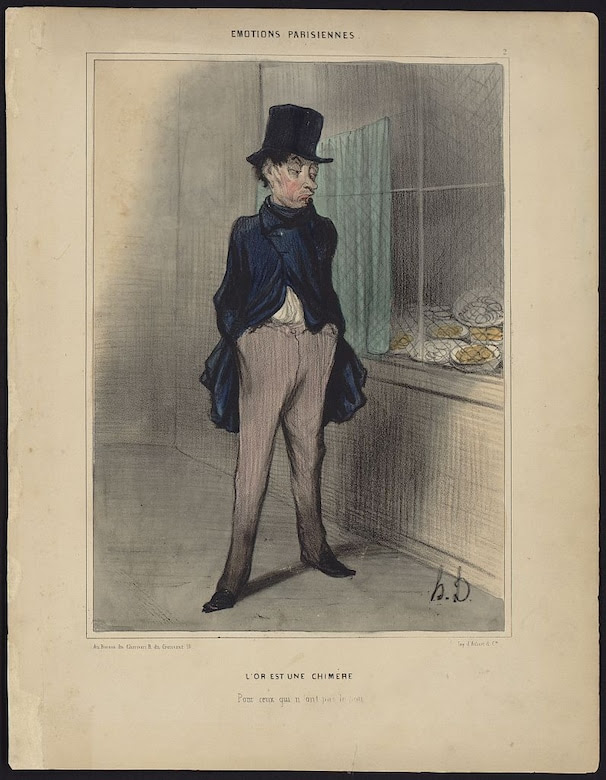 The master of French graphic satire is represented with this 1839 hand-colored lithograph from his “Emotions Parisiennes” series. Translated, the work’s title means: “Gold is a myth for those who have not a penny.”
.
ART YOUNG: 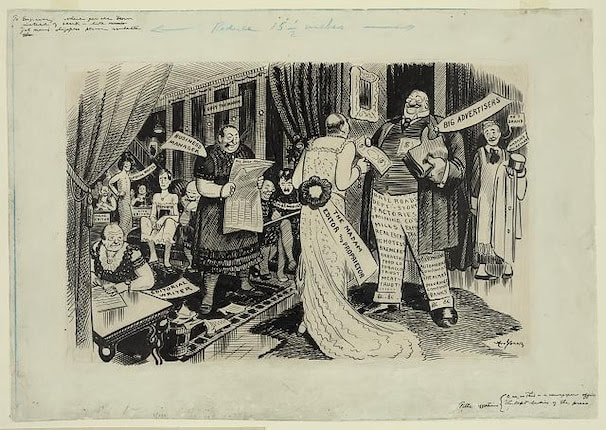 With “Questioning the Power of the Press” (1912), the exquisite linework of Art Young (published in the leftist journal The Masses) satirizes publishing magnate William Randolph Hearst with all the boldness of Orson Welles. In this illustration, the ”capitalist press” is depicted as a brothel. 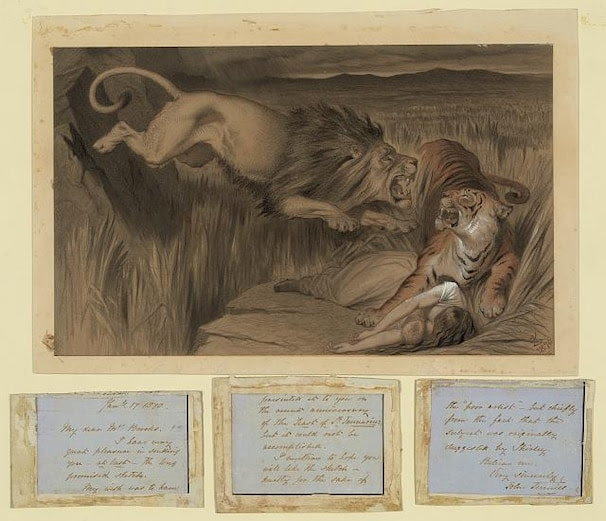 The British illustrator commented on the Indian Mutiny of 1857 with this drawing, which “helped popularize the lion as a modern symbol of the British Empire in cartoons.” Tenniel re-created this from his lost original that had been published in Punch the very year of the vengeful violence. 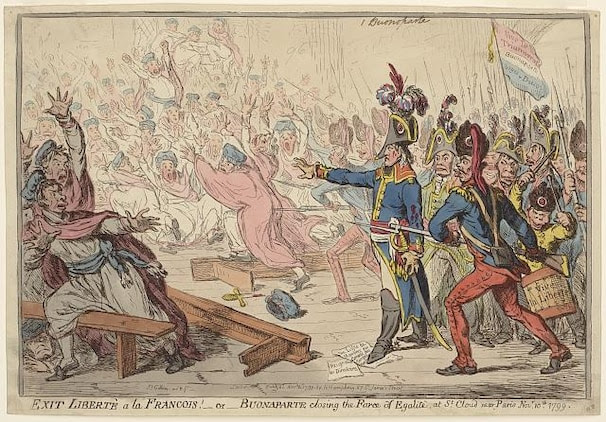 The great British caricaturist rendered this work just days after the actual 1799 event: An assured-looking Napoleon Bonaparte leads a coup d’état as he ousts members of France’s post-Revolution government. The hand-colored etching is titled: “Exit liberte a la François! or Buonaparte Closing the Farce of Egalite, at St. Cloud Near Paris.”
..
GLYNIS SWEENY. 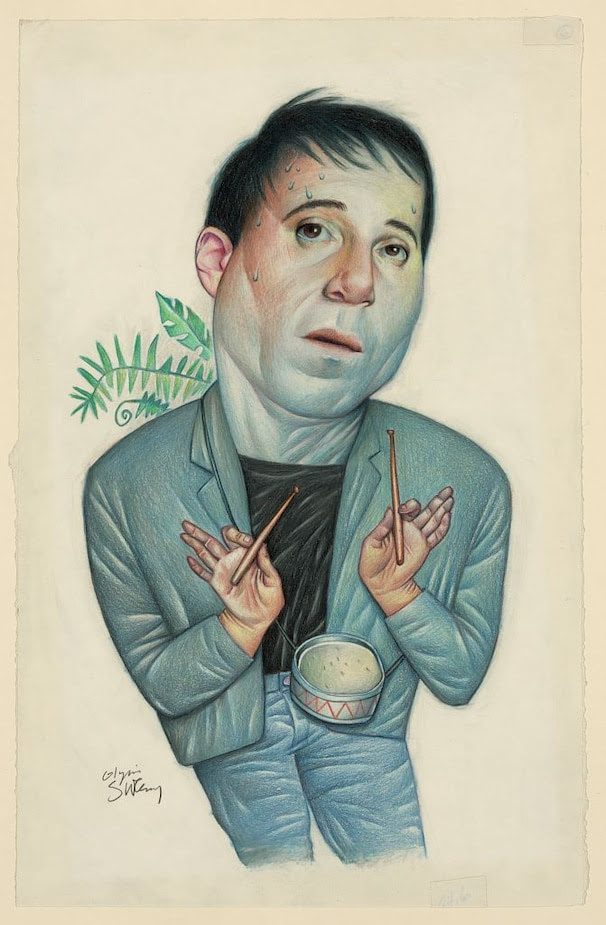 As an illustrator and page designer for the Detroit News in 1991, Sweeny rendered this colored-pencil caricature as the legendary pop singer-songwriter Paul Simon — basking in post-”Graceland” popularity — was kicking off his “Born at the Right Time” tour.
.
THOMAS ROWLANDSON: 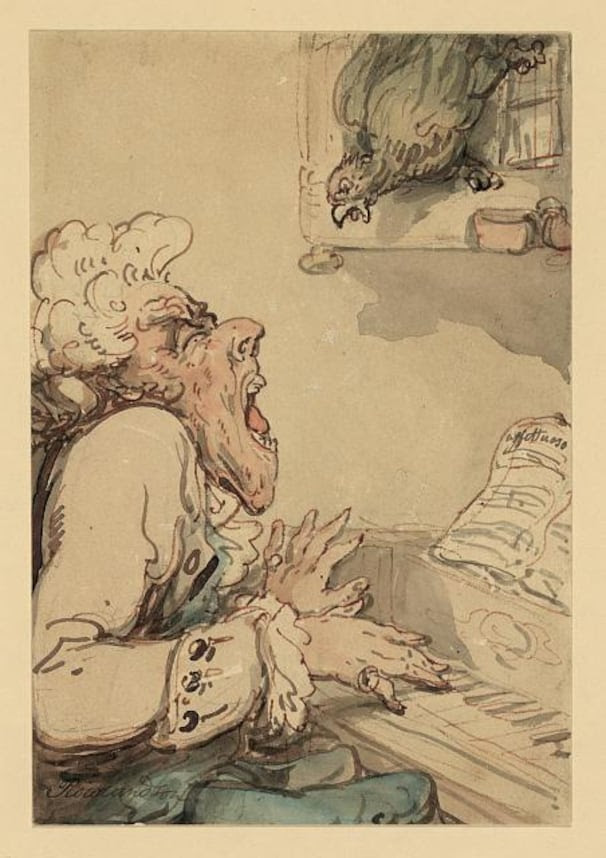 Drooker won the 1994 National Book Award for his wordless narrative ”Flood! A Novel in Pictures,” for which he used black-and-white scratchboard to create a tale of stark urban life. 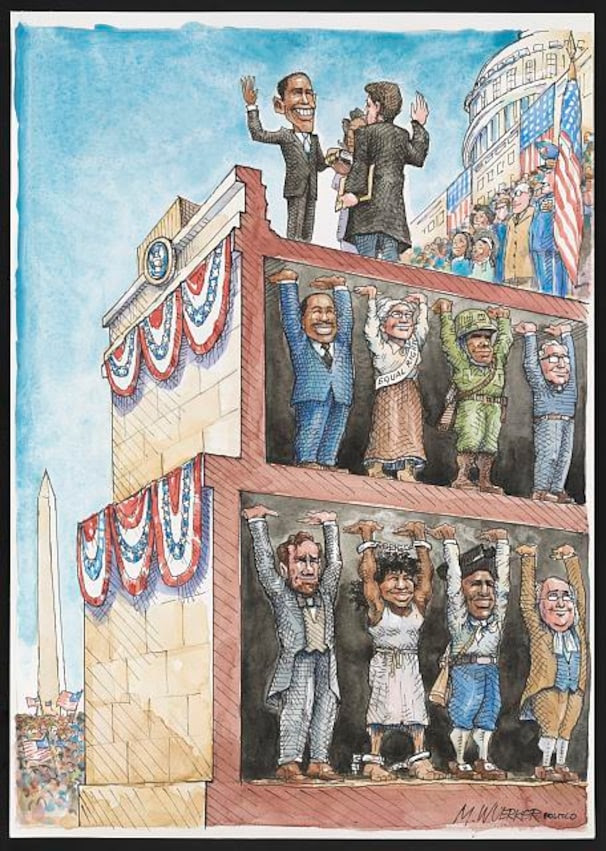 Politico’s Wuerker — a Herblock Award winner and multiple Pulitzer finalist — represents Obama’s 2009 inauguration by depicting the tiers of pioneers who came before him.

(Watercolor and ink over graphite underdrawing.).
. 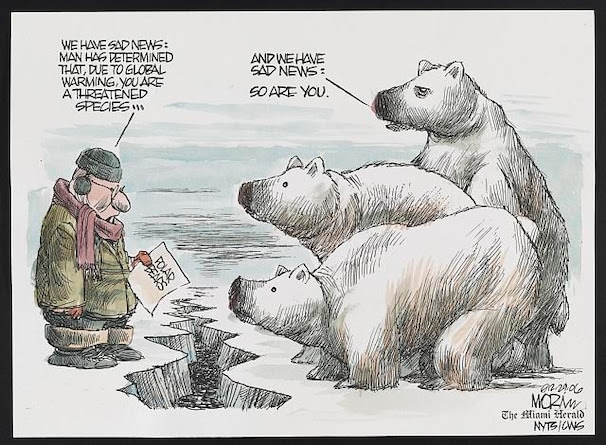 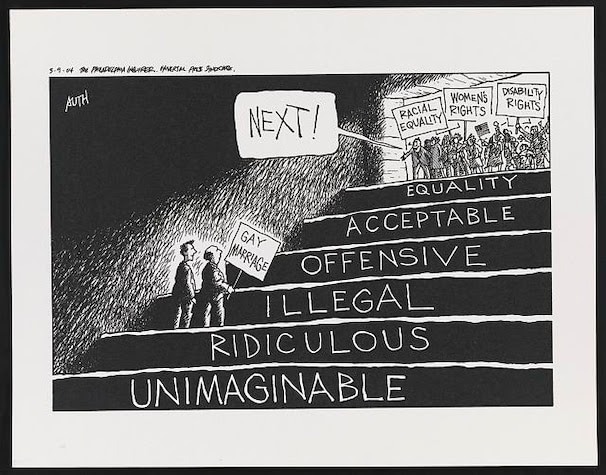 Pulitzer and Herblock winner Tony Auth — a mainstay of the Philadelphia Inquirer since 1971 — draws in high contrast to comment on same-sex marriage laws in 2004. 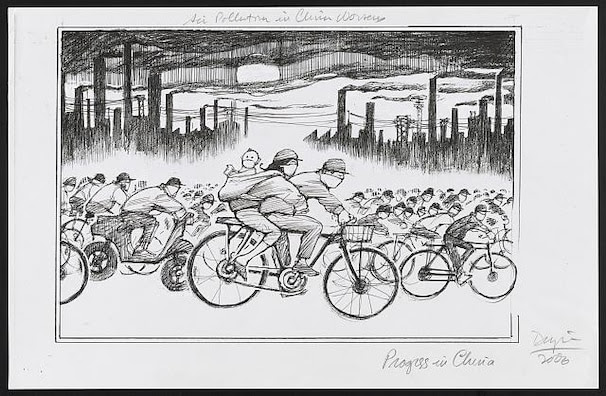 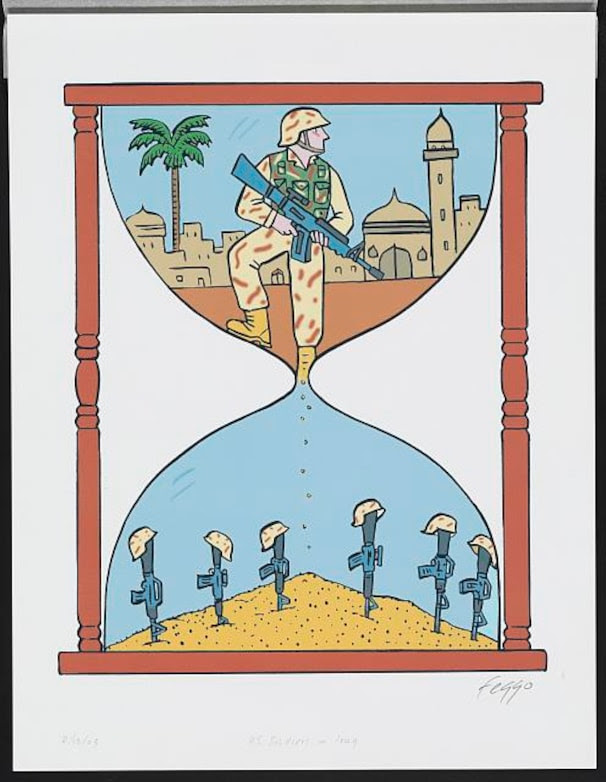 The Mexican-born, New York-based cartoonist comments on American forces in arid Iraq in 2006 by depicting the slow sands of time as the mortality of war wages on.

(Ink with graphite and opaque white on paper.)
UPDATE: You can read more about the exhibition on the "We Come From the Future" blog.
Published by Bado at 7:20 AM