Interview with cartoonist Dave Brown of "The Independent" 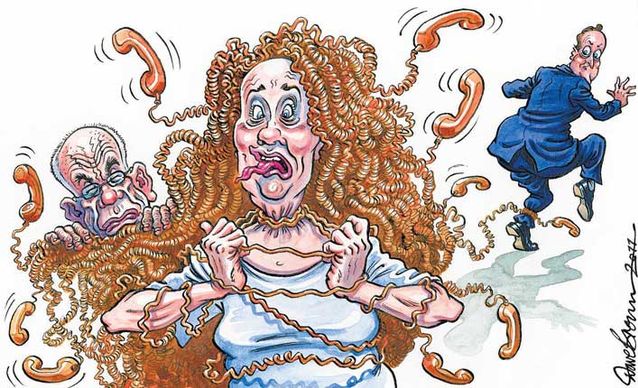 Newspaper cartoonists: Quick on the draw

Forget sharp-tongued gossip columnists – when it comes to taking on the great and the not-so-good, the newspaper cartoonist is king, says Gillian Orr

One of the all-time great cartoonists, Sir David Low, used to say that his role was to be the permanent opposition. His most famous piece, a 1939 cartoon called "Rendezvous", depicting Hitler and Stalin bowing and greeting each other respectively as “the scum of the earth” and “the bloody assassin of the workers”, led to his work being banned in a number of countries. 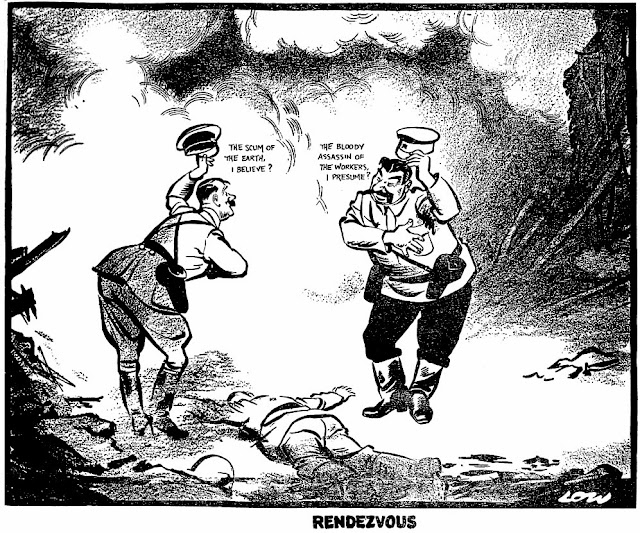 It demonstrates how afraid world leaders and establishment figures were (and indeed still are) of being the subject of a particularly stinging cartoon. At best the subject will be gently mocked and embarrassed; at worst a damning attack is launched. Because they make such a striking visual, a cartoon can often be more damaging than a critical editorial.

"You’re like one of the other journalists on the comment pages,” says Dave Brown, political cartoonist for The Independent since 1996. “It’s a comment piece; it’s your personal view on whatever the story is but instead of writing you draw a picture. The cartoonist particularly has to be a bit of a controversialist. You’ve got to prod and poke; being offensive is part of it.”

The first political cartoons appeared towards the end of the 18th century but these were expensive single prints, bought by the wealthy for display.

Then, in the 1840s and 1850s, magazines such as Punch and its imitators Judy and Fun began to appear, all carrying political cartoons.

“These cartoons were fairly staid; they were not as challenging, dramatic or vulgar as the 18th century and early 19th century ones,” says Dr Nick Hiley, head of the British Cartoon Archive.

“There was a fear of challenging the establishment; that you shouldn’t be teaching people to be rude about their betters or be appearing to let the masses be involved in important decisions.”

It was at the end of the 19th century that political cartoons started to pop up in newspapers, mainly as a result of changes to the newsprint, meaning they were a lot cheaper to produce. They could now afford to spare room for things like illustrations, advertising and cartoons.

In 1904 The Daily Mirror appointed the first full-time cartoonist for a morning paper, but it wasn’t until the 1960s that cartoons took on their modern, biting form.

“When they started caricaturing the Queen in the Sixties, which they’d previously never done, the respect that had been maintained started to break down and we began to see the kind of cartooning that we have now, where anybody in the public eye is a target for ridicule,” says Hiley. Peter Brookes, political cartoonist for The Times, acknowledges that ruffling feathers is inevitable.

“A political cartoon is as likely to raise a wince as it is a belly laugh. A lot of people don’t understand what you do for that very reason,” says Brookes. “Some think that you should be making people laugh all the time and when you don’t, when you’re dealing with phosphorous bombs in Gaza or something like that, you’re not going to try and be funny about it except in a black or dark way.”

With their propensity to be controversial, most cartoonists have had various run-ins with authority and, more often than not, these are the pieces of which they are most proud. Dave Brown’s 2003 cartoon depicting former Israeli Prime Minister Ariel Sharon, as a monster eating Palestinian babies, led to an investigation being made by the Press Complaints Commission. It also won him the award for Political Cartoon of the Year.


Every cartoonist has their favourite figures to draw and George W Bush was widely acknowledged as being a gift for the profession.

Steve Bell of The Guardian decided early on in Bush’s career that there was something chimp-like about his appearance and so ran with it. While he was still comically presented, as his presidency grew more disturbing, with invasions of Afghanistan and Iraq, so Bush’s caricature became more sinister and monstrous.

“Usually you find that the ones you enjoy caricaturing the most are the ones you hate the most,” says Brown. “You can put all your loathing about the person’s politics into the drawing.”

However, not every newspaper cartoonist dishes it out to the establishment. Matt Pritchett, responsible for The Daily Telegraph’s much-loved Matt pocket cartoon, says his only remit is “to make people laugh. Or at least try to”. Although the paper also runs a more straightforward political cartoon, Pritchett’s work is topical and always deals with the events of the day but never features public figures – it is society’s response to the news stories that is portrayed.

“I’m not trying to make a point or put a politician in their place or put the world to right,” says Pritchett. “There are times that people tell me I’ve made a point but I’m usually not aware of it. I suppose you could say that by making something look silly and making a joke about it, then that’s making a point. I want to make people laugh and if I can do that by picking on the Liberal Democrats then all the better.”

One thing they all agree on is that they have their blank moments, days when they struggle for inspiration.

“Some mornings it’s obvious what the cartoon should be,” says Brown. “Other times it’s slow and you might be kicking around for a story. Some days it springs out at you, other days you’re banging your head on the drawing board three hours later.”