The following cartoon was the first one to be published in The New Yorker following 9/11: 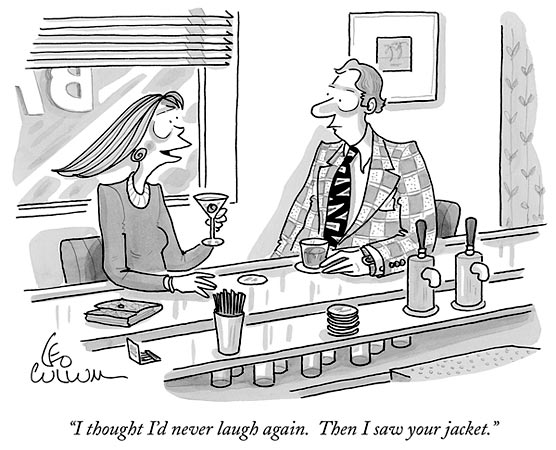 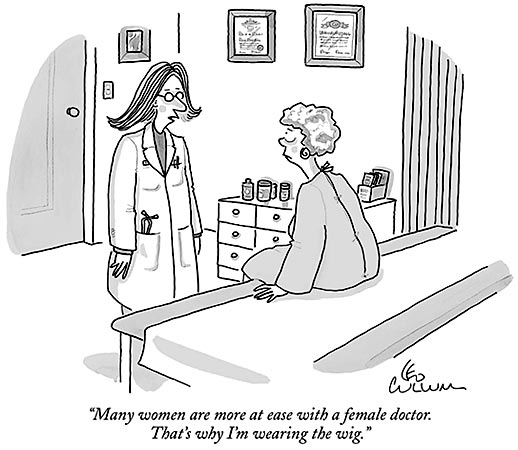 Leo Cullum's obits in The Washington Post, The Los Angeles Times and The New York Times.


An interview with Leo Cullum from The New Yorker website:


If you have a healthy appreciation for the absurd and the anthropomorphic, a Leo Cullum cartoon – one of hundreds that he’s contributed to The New Yorker since the 1970s – will make your day. His drawings frequently star animals, from neurotic elephants to bi-curious dogs, though he lavishes plenty of attention on human foibles, too. Whatever the subject matter, a Cullum cartoon brings an immediate, knowing, and grateful laugh.

We recently e-mailed Leo to learn more about his life’s work, present and past. (Including his long career as a pilot in the Marines and for TWA. Fact!)

TCB: Were you always interesting in drawing? What kinds of things did you like to draw as a child?
LC: As a kid, I always drew stick figures of battle scenes, eventually evolving into full-figured fights of cowboys and Indians.

TCB: Did you have any role models in the cartooning world while you were growing up – New Yorker artists or otherwise? What about now?
LC: I loved Don Martin at Mad magazine. Around 1970 I discovered The New Yorker, and when I initially started submitting cartoons, my ideas were bought for Charles Addams to draw. So, in that respect, he became my mentor.

TCB: Was there anyone or any event in your life that pushed you toward art when you were young?
LC: My mother studied fashion illustration at the Newark Fashion Institute. She thought I had talent, which was a big motivation.

TCB: You graduated from college an English major, then became a pilot shortly after. Was flying something you wanted to do regardless of the draft, or did it put a crimp in plans that you had for after college? And what were those plans?

LC: I thought I would probably wind up in advertising, but I had always wanted to fly. After I graduated from Holy Cross, I became an officer in the Marine Corps and was accepted into the aviation program, which I thought was a great opportunity. I had the time of my life. Certainly more fun than advertising.

TCB: Did you find it hard to adjust to the relatively quiet life of cartooning full time after being a pilot?

LC: No, not at all. I was cartooning during most of my 34 years of flying for TWA. I would draw during my layovers and on my days off from flying, so it really wasn’t much of an adjustment, except that I wasn’t drawing in Paris or Rome anymore.

TCB: You’re well known for your drawings of anthropomorphic animals. What, to you, is the funniest animal you can put in a cartoon?

LC: Well, I sell a lot of dog and cat cartoons but to me, lions are really the funniest.

TCB: You’ve lived in Malibu since the 1970s. How has the area changed over time? Has living in that famously wealthy, celebrity-filled environment supplied you with good ideas for cartoons?

LC: I have not gotten one cartoon idea from living in Malibu…seriously. It’s not a funny place. Pretty, but not funny. Maybe that’s the problem. Too much sun and blue water. It used to be a quiet and peaceful small town, but these days, the paparazzi have taken over. I make a point of never looking at celebrities. That seems to work for all of us.

TCB: Regarding The New Yorker’s Cartoon Caption Contest, what are your thoughts about other people’s captions for your cartoons?
LC: Mixed. I’m happy to sell the cartoon. But the original no longer has my caption, which is confusing.

LC: The New Yorker pays attention to the cartoons just as they do the articles. The cartoons are not an afterthought, but an equal part of the equation, and they expect the best. Many people will begin reading the magazine’s cartoons before they get in the habit of reading the magazine from cover to cover. The only other publication that comes close to treating cartoons as part of the publication is Playboy. Other magazines just use them as filler.

TCB: What are some of your favorite cartoons from New Yorker artists?

LC: As for cartoons, the longer you look at one, the less funny it becomes. There is one, by Michael Maslin, that stands out. It’s a picture of a man and a large dog, looking at a small dog in the pet store. The large dog says, “He is cute, but you already have a dog.”