The offices of the French satirical magazine were destroyed a day after they featured a caricature of the Islamic prophet Muhammad on its cover and named him editor-in-chief.

Satirist dies in retaliatory religious violence
It’s a headline I hope never to see, of course — yet I grow increasingly concerned I might.
Home invasions and murder plots. Grisly photos and online threats. Virtual fatwas and firebombs.
In the past six years, such artists as Lars Vilks and Kurt Westergaardand “South Park” creators Matt Stone and Trey Parker and the illustrator formerly known as Molly Norris — to name just a handful — have had reason to fear for their physical safety after depicting and/or satirizing Muhammad.
On Wednesday came news that the French satirical magazine Charlie Hebdo had its Paris offices firebombed after the publication named Muhammad as its “guest editor” and printed a caricature of the Islamic prophet on its cover of its special “Muhammad issue.”


Charlie Hebdo also said that its Web site had been disrupted.
(On Thursday, Charlie Hebdo reprinted its caricatures in a supplemental edition bundled with the left-wing daily Liberation, Reuters reports.)
The magazine’s special issue was called “Charia Hebdo,”a pun on the French word for sharia law, and reportedly contained the mocking phrase: “100 lashes if you don’t die of laughter.”

Charlie Hebdo, not unlike “South Park,” is said to pride itself on being an equal-opportunity offender with its satire and vulgarity.
The firebombing naturally sparked voices of condemnation.
The French Council of the Muslim Faith told the AP that it disapproves of “the very mocking tone of the paper toward Islam and its prophet but reaffirms with force its total opposition to all acts and all forms of violence.

And until authorities announce any leads or arrests, we can’t rush to presume the true motivation of those responsible — especially given that the magazine apparently has many satiric “enemies.”
And citing an Islamic parable about Muhammad’s kindness, Post contributor Arsalan Iftikhar wrote that the parable’s “genteel act of prophetic kindness toward unfriendly (and overtly hostile) neighbors is the Muslim ‘Ubuntu’ standard that we should all use within our collective lives — not stupid threats of violence aimed at the silliness of some sophomoric cartoons aimed at inciting a provocative response around the world.”
Yet this latest flashpoint act also spotlights the choice that each politically minded artist and humorist makes: Does he or she depict or satirize Muhammad — and what is to be gained by doing so?

When Molly Norris’s poster art sparked the “Everybody Draw Muhammad Day” campaign last year — an image she says she created to support threats made against the “South Park” creators — professional cartoonists who signed a petition to support the animators had a choice to make themselves.
The San Diego Union-Tribune’s Steve Breen, who called the campaign “needlessly provocative,” told Comic Riffs at the time:

“I signed the petition because I’m against violence and intimidation by any group. That said, it is my understanding that any depiction of Muhammad, drawn, painted, sculpted, etc. is forbidden according to the Islamic faith and thereby offensive to Muslims. I don’t think it’s kowtowing to be respectful of another’s belief system.

”I think every day should be draw Muhammad day, or draw Jesus day or draw Moses day. These prophet and messiah types can handle themselves — I really don’t think they’re concerned about what cartoonists draw.”

And in his recently released graphic-novel bestseller “Habibi,” Craig Thompson told Comic Riffs that though his epic book depicts many religious prophets, he purposefully chose not to depict Muhammad because his book — while consciously employing Orientalist tropes — is meant to be respectful.
Political artists make their choice. Radical extremists make their choice. And nothing really changes except the names.
Since 2005, when Jyllands-Posten published Danish caricatures of Muhammad (including one by Westergaard) — inciting protests across the Muslim world — we have seen a revolving door of outcomes:
Westergaard, who has the target of a murder plot, retired in 2010.
Vilks — the Swedish cartoonist who faced multiple attacks after depicting Muhammad in his art, and was the target of an alleged murder plot — decided in 2010 to go into hiding.
The “South Park” creators focused most of their attention on Mormonism this year, winning a raft of Tony Awards for their hit satirical musical “The Book of Mormon.”

Zachary Chesser — the Virginia man who threatened them on the website Revolution Muslim — is now serving a 25-year prison sentence.
And the then-Seattle illustrator formerly known as Molly Norris continued to find new work, yet she assumed a new identity more than a year ago at the FBI’s insistence, to protect her safety after she — like other journalists and artists — became the target a death threat by the recently slain Yemeni-American cleric Anwar al-Awlaki.
The satirists may leave the scene for at least a time, but as the French firebombing reminds, the flashpoint issue is still white-hot.
For many a visual satirist, after each firebombing or threat of violence, the choice still burns. 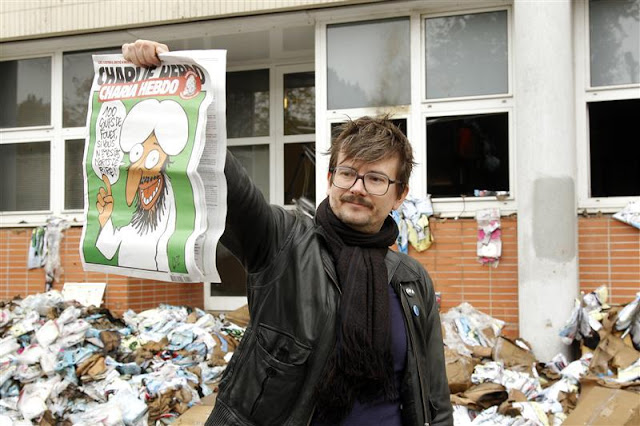