The State of Editorial Cartooning

The original article by Michael Cavna in Comic Riffs. 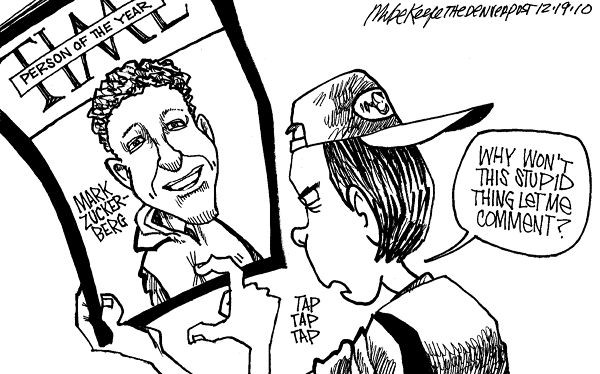 
Today is the day that Mike Keefe flicks off his newsroom drafting lamp for the last time and departs the Denver Post after nearly a four-decade run. Just months after accepting the Pulitzer Prize, Keefe also now accepts his paper’s buyout offer — leaving the Mile High air thinner by yet one more daily cartooning voice.
It is hard for the whooshing vacuum of so many Colorado exits not to leave us somewhat winded.

As staff artists go, their goodbyes are perhaps that area’s most prominent since 2009, when the Rocky Mountain News folded. Political cartoonist Ed Stein and sports editorial cartoonist Drew Litton were landmarks on the city’s newspaper landscape before both losing their longtime Rocky perches.

Colorado, in fact, has a rich and fertile history of editorial cartooning that includes former Post legends Paul Conrad and the still-oh-so-vital Pat Oliphant — Pulitzer Prize winners both.In recent years, though, this journalistic mountain range has endured an especially harsh period of clear-cutting. Which gives rise to the question:

As Colorado goes for cartoonists, does so go the nation?

“With respect to editorial-cartooning positions, I don’t think Colorado is any different from the rest of the country,” Sherffius tells Comic Riffs. ”Mike Keefe took the Post buyout, but will still create work [for the syndicate Cagle Cartoons]. Ed Stein and Chuck Asay [who retired from the Colorado Springs Gazette in 2007] still continue to draw ... for syndication.

“As for me, I love cartooning and was happy to have the support of the Boulder Camera and Creators News Service, but after so many years, I wanted to try other things and earn a little extra income.”

Sherffius is upbeat about the industry, even in the wake of Keefe’s Post departure.

“I’m always saddened when we lose a voice in this field,” he tells Comic Riffs. “The business model for editorial cartooning is obviously changing, but I’m still optimistic that new voices will emerge and that the great tradition of our profession will continue.”

Despite coming off a peak year in terms of national honors, Keefe — who, like Stein, is a Fischetti Award winner — is less optimistic about the industry.

“It looks like nothing but a down escalator for the classic full-time newspaper cartoonist,” Keefe tells Comic Riffs. “The digital realm is wide open and offers plenty of opportunities. Unfortunately, most don’t come with a pay check.“

Keefe — who notes that he hasn’t ”heard a definitive answer” as to whether the Post will hire a new cartoonist, though “the editorial editor thinks its doubtful” — will continue to draw occasional syndicated cartoons. Still he says, his exit today from the Post summons certain feelings of connection.

“I like newspaper people,” he tells Comic Riffs, “There is an energy you feel in a newsroom that gets your blood up. It’s a bit muted, of course, during buyouts and layoffs. [But] I will miss those relationships.” A recent cartoon by John Sherffius, who announced his departure from the Boulder Camera to pursue a careerin graphic design. (JOHN SHERFFIUS - Boulder Camera / Cagle.com)


Writing in the Denver alt-weekly Westword, Michael Roberts on Monday places Keefe’s buyout in both a local and national context..

“Papers across the country, including this one, have been laying off their cartoonists with increasing frequency,” Roberts writes, “and Keefe undoubtedly knew that even his 2011 Pulitzer Prize for cartooning wouldn’t prevent him from joining their number.”

(As for his own Westword cartoonist Kenny Be — a Denver fixture since 1982 whom Stein calls “a marvelous talent” — Roberts tells Comic Riffs that Be “continues to work for Westword, but on a freelance basis.”) 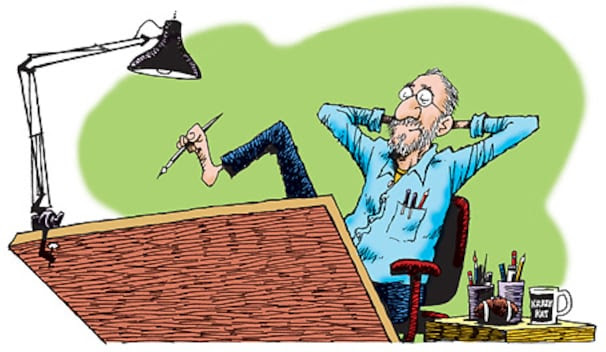 Ed Stein’s winking self-caricature. (ED STEIN / Used by permission of the artist - . )
Like Sherffius, Ed Stein sees his state’s depletion of longtime cartoonists as reflective of the industry’s national trend.

“What's happening in Colorado is no different than what's happening all over the country,” Stein tells Comic Riffs. “Staff editorial cartoonists [are] becoming an endangered species.”

Stein not only mourns the decline, but also questions the wisdom of the decision-making.

“I've always believed that a good local cartoonist is an essential anchor to a lively and effective editorial page, and that papers that discard their cartoonists or fail to replace them diminish their own voice,” he tells Comic Riffs. “When I began my career at the Rocky Mountain News, Mike Keefe had been at the Post for two years, following Pat Oliphant and Paul Conrad. From that glorious tradition, we've come to this.

“To say it saddens me would be an understatement.” 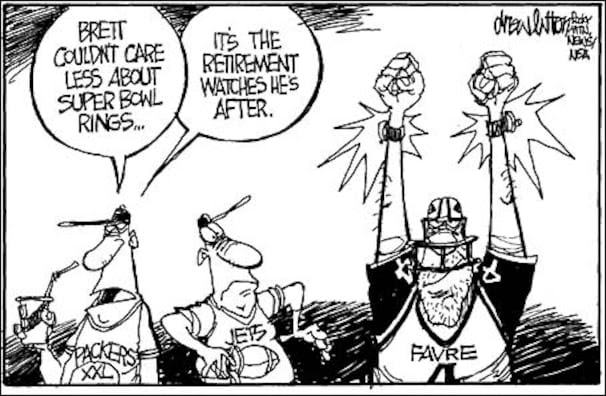 “It’s hard to watch the art form you’ve loved for so long, not to mention your livelihood, being rendered extinct right before your very eyes,” Litton tells Comic Riffs. “It’s like watching the dinosaurs running from the meteors. You know they are about to be thrown into the Ice Age, and there’s not a damn thing you can do about it.”

Emphasizing that “Colorado has long been a hotbed for great editorial cartooning — “Sigh. Those were the days, my friend,” says the sports cartoonist, invoking the song lyric — Litton cannot comprehend the modern logic of the board room, let alone the newsroom.

“At a time when newspapers are losing subscribers by the droves, editors and publishers and, in particular, bean-counters who are beholden to stockholders, are throwing away one of the most valuable visually stimulating and most read commodities in their papers. Less content [equals] less readers,” says Litton, who has also worked for ESPN.com.

“It will be interesting when the stockholders finally figure out that the stock they own in newspapers is akin to investing in an automobile company who builds cars but ships them without the engines. Not a lot [of] long-term value there.”

Reflecting on once-proud editorial-cartooning peaks in the Rockies, Litton underscores that the effect is both professional and deeply personal:

“It’s disappointing,” Litton tells us. “The end of an era, really. Some of us ponder our futures. Some of us wake up in the middle of the night shaken by the echoing words of a nightmare and the job prospects ahead.
“ ‘Now would you like whipped cream on that non-fat latte?’ “
MORE:
THE RANT: Just how much is a political cartoonist worth?
THE WAY OF THE DODO: As more cartoonists draw severance, honor them while you can
MIKE KEEFE: 2011 Pulitzer winner calls it quits
DREW LITTON: Is animation the future of sports cartooning?
DREW LITTON: RIP, Rocky Mountain News.
PAUL CONRAD: In memoriam to a cartooning giant
.
DREW LITTON:
.