The Resurrection of Gahan Wilson’s 'Nuts' 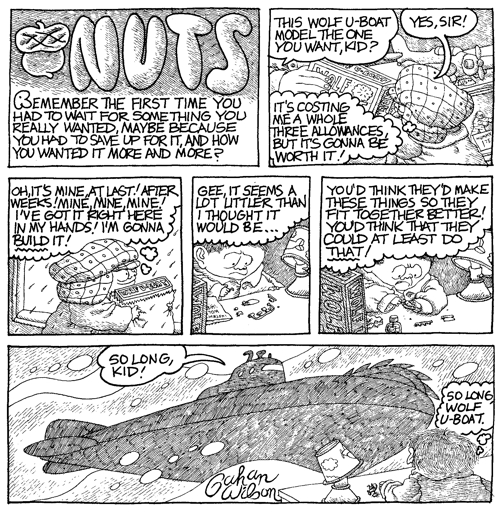 Long venerated for his eerie and macabre sensibility as evidenced in his magazine cartoon work, Wilson was recruited for the nascent National Lampoon in 1970 and given the creative freedom to try and shock the younger longhairs that had created and contributed to the brutally scathing, take no prisoners humor magazine.

In a publication replete with biting socio-political satire, intentionally offensive and transgressive material (and no small amount of borderline-pornographic humorous fumetti strips regularly showcasing voluptuous naked women) aimed squarely at a mostly male post-hippie audience that had seen its “peace and free love” ideals reflected in the dark mirror of the 1960’s social upheaval and the Vietnam conflict, Wilson’s cartoons spoke from a slightly older but no less skewed and cynical point of view.

When given the opportunity to contribute to the magazine’s rich and varied comics section—the appropriately named “Funny Pages”—and encouraged to bring something truly horrific, Wilson moved away from the one-panel gags and illustrated thematic text pieces he’d thus far contributed and came up with Nuts, which he envisioned as sort of the anti-Peanuts.

While respecting Charles Schultz’s landmark strip, Wilson, in the Nuts collection’s afterward, notes that Peanuts was not really about children. “His strips were little moral fables. … My rationale was, in the Lampoon style, a rebellion against this ‘let’s do a children’s strip about children,’ which was a great motivator. What is it like? What does this little kid go through?”

Wilson answered that and many other questions ranging across the entire childhood experience with his Nuts strips, featuring the unnamed pudgy “Kid” as it’s hapless protagonist.

Drawn in his familiar style, only with a stronger accent on detail to stylistically convey an unspecified past (that resembled an amalgam of the 1930’s spiced with 1940’s and 1950’s elements), the strip chronicled the lessons learned from the wonder, triumphs, confusion, frustrations, and defeats (with a marked emphasis on the latter three) that occurred in a universally experienced childhood.

Navigating the bizarre landscape of life among grownups while dealing with other children and the unexpected curve balls thrown by life was a confusing and often terrifying experience and Wilson’s Kid reminds us of that in no uncertain terms.

Perhaps the single strip that sums up the Nuts experience best involves the Kid excitedly purchasing a Wolf U-Boat submarine model that comes in a huge, excitingly-illustrated box, only to get it home and discover it’s actually a tiny and disappointing replica whose parts barely even fit together when assembled.

As he comes to realize he’s been ripped off, the kid imagines a majestic image of the submarine underwater and veering away from him as it says, “So long, Kid.” His sad and utterly impotent reply is, “So long, Wolf U-Boat.”

When asked by Publishers Weekly about that moment, Wilson soberly stated, “That one really is sort of the core image of the strip’s essence. As a humorist, the whole thing comes from tragedy. No two ways about it.”

When asked to expound on his inspiration for Nuts beyond it being a rebellion against Peanuts, Wilson mused, “One day, while prowling the streets, I saw this little kid who came up to the knees of the grownups around him. They were being nice to him but I could see what he was up against.

Adults underrate kids. They don’t mean to but they don’t understand how these little creatures were as complicated as they, the adults, were, so I kind of just lunged into it. I also noticed how intensely alive children are and the intensity that goes on between them as they interact and things go right or wrong.

“Children are so open to vulnerability…the problems they have with communication and being understood by grownups,” he continued. “All the odd situations between adults that kids see through but adults don’t that kids see through. Then people seal off as they become adults and are no longer open to understanding.

It’s really sad to see happening. They get to take in less and less of what’s around them and become more isolated. I mean, you go to your high school reunion and see the once-alive faces of the people you grew up with and you say, ‘My god! What happened to Bob and Susan!’ and whomever and it’s just incredibly sad.

Neil Gaiman’s phrase, ‘being surrounded by mad giants,’ pretty succinctly sums it all up.”

“I grew up in Evanston, Illinois,” Wilson recalled. “Me and the local kids used to play all kinds of games near what would be considered the neighborhood’s old folks’ home, and we’d notice them looking at us wistfully.

Now they were old, no longer ‘mad giants,’ but instead they were these strange, dependent creatures and they would look at us with this deep wistfulness.

It seemed like the old folks were trying to recapture that child’s sense of being alive late in their own lives; they’d spent their whole adult life in a tank and there was no real point to that, and now they realize they could have used those years in other ways.

So, childhood to me was quite funny and quite tragic, shocking and monstrous and so on, and in the end coming through all that makes humans more impressive to me.”

Now eighty-one years old and with a ferocious mind very much still firing on all cylinders, Wilson is not content to rest on his laurels and has his eye firmly on the possibilities offered to cartoonists by the digital age and the era of the graphic novel’s steadily growing prominence.

When asked about the likelihood of producing a new graphic novel, Wilson stated, “I’m in a stage of fooling around with that as a possibility. Yeah, with all the current tech available, the electronic thing has a lot of fun potential, and I’m looking into that, but the electronic medium is still too crude to match the real thing when it comes to drawing, and it’s simply not as much fun.

Drawing digitally just can’t match the…sensuality of pen and ink. But I’ve done scads of short stories, so the wheels are turning. With the electronic thing, there’s a format I think they haven’t fully hit on yet, and I faintly see radically different ways of playing with it.” 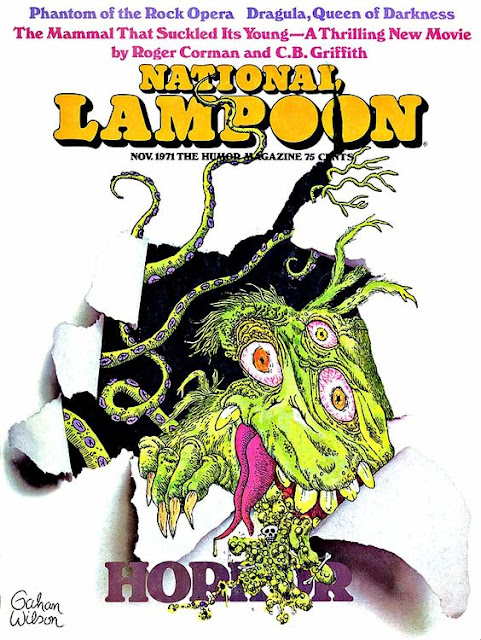 During the National Lampoon’s era of catching lightning in a bottle that included an avalanche of contributions from such comics talents as Neal Adams, Shary Flenniken, Vaughn Bode, Russ Heath, and Jeff Jones, Nuts reigns as its most satisfying and universally relatable long-running strip, reading as fresh and un-dated while many of its contemporaries cannot be appreciated when removed from their arena of topical 1970’s satire.

While Watergate and other events of that troubled time become further relegated to history tomes (or digital files) with each passing year, the trials of childhood will remain for as long as humankind flourishes, so it’s good to finally have a work of Nuts’ caliber and significance collected so future generations can see for themselves that Gahan Wilson was a humorist who “got it” in no uncertain terms. 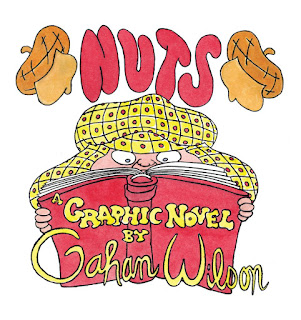 Gahan Wilson’s Nuts is available via Amazon.com and at comics shops and bookstores nationwide.
Published by Bado at 10:18 PM