"Polar Lines" is an exhibition of 100 Canadian editorial cartoons dealing with the North curated by Montreal's Gazette cartoonist Terry Mosher aka Aislin for Inuit Tapiriit Kanatami.

An presentation by curator Terry Mosher, a selection of cartoons and the complete exhibition below:

Canada has a history of pointed artistic commentary stretching back to 1759 and the battle for Quebec on the Plains of Abraham. Brigadier General George Townshend, third in command to British General James Wolfe, also had a reputation in London as a caricaturist. During the Quebec siege, Townshend started doodling wicked caricatures of Wolfe for the amusement of his fellow officers. The General hit the ceiling and wanted an official inquiry (how Canadian). However, as we all know, Wolfe died on the Plains of Abraham and—how auspicious for Canadian cartooning!—it was George Townshend who accepted the surrender and signed the peace treaty that led to the eventual establishment of Canada.

That graphic satirical tradition continued right up to the present day in many forms such as gag cartooning (poking fun at life and social pretensions), comic books (Superman, one of the original action heroes, was drawn by Toronto-born Joe Shuster), comic strips (Lynn Johnston has drawn her syndicated strip For Better or For Worse since 1979) and, more recently, graphic novels — expanded, quality comic books for an adult audience.

Over the years, though, no group of artists has proved to be better at poking fun at our own than Canada’s political cartoonists. Trust me when I say that they can be a hard-hitting, cantankerous lot, often disagreeing with each other (much as happens between Canada’s various regions).

However, while gathering these cartoons, I was delighted to discover that, to a person, the Arctic and its people occupy a very special place in the hearts of our ordinarily wicked cartoonists. We delight in the magnificence of our northern landscape while fretting over the fragility and possible exploitation of our original peoples –in the process reflecting many other Canadians point of view!

There is a precedent for this exhibition, by the way: In 1998, Makivik Corporation in Nunavik, northern Quebec, had asked me to gather a collection of Canadian cartoons dealing with northern subject matter that would be used in a display at the opening of their new Head Office in Kuujjuaq. Those initial cartoons proved to be engaging enough that they remain in place today. Therefore, given that exhibitions initial popularity, Inuit Tapiriit Kanatami asked if I would again approach all the Canadian cartoonists to provide an expanded and updated exhibition of cartoons to be part of ITK’s 40th anniversary celebrations.

All of the Canadian cartoonists co-operated on this project, each of them sending me several of their favourite cartoons on northern subject matter. The National Archives in Ottawa also proved very helpful in providing earlier material from their massive collection of cartoons. And I should mention the extraordinarily helpful library staff at both The Globe and Mail and The Toronto Star. From these sources, I submitted approximately 200 cartoons for consideration. I’m told that the staff at ITK had a delightful time choosing the final 100 cartoons that were used in this exhibition, called “Polar Lines”. It’s organized thematically in 10 panels of 10 illustrations each.

So, on behalf of Canada’s cartoonists, we wish Inuit Tapiriit Kanatami a happy 40th anniversary – and continued success in all of your endeavours.

Terry Mosher has worked as a political cartoonist for The Gazette in Montreal for over 40 years now, drawing under the pen-name, Aislin. Mosher is also is the current president of the Association of Canadian Editorial Cartoonists.


Here is an effort of mine that was not selected for some strange reason: 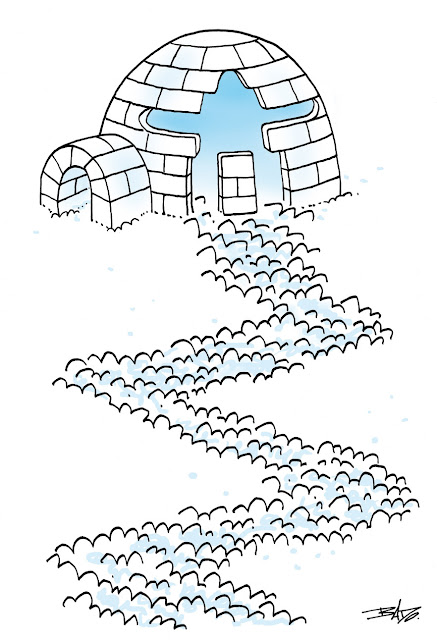 Finally the panels of the complete exhibition: