"The Someday Funnies" in Mother Jones

An interview with editor Michel Choquette and selections from "Someday Funnies". 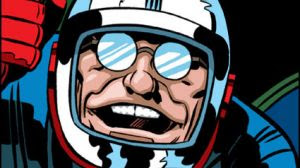 Comic artwork by Jack Kirby and Joe Sinnott
The curator of a new collection of long-shelved comic art on wooing Salvador Dalí, hiring a Hitler impersonator, and going bust for his dream.
—By Tim J Luddy
November/December 2011 Issue
Click here for a slideshow of selections from The Someday Funnies.
Listen to an audio version of this interview:

Detail from "The Man Who Peaked Too Soon," text and art by Tom Wolfe. Better known for his role in the development of the New Journalism in the early '60s and his many fiction and nonfiction books, Wolfe demonstrates here that he could also have had a career as a comics artist, while narrating the story of a man who garners nothing but abuse by anticipating some of the major trends of the '60s and '70s just a little too early.