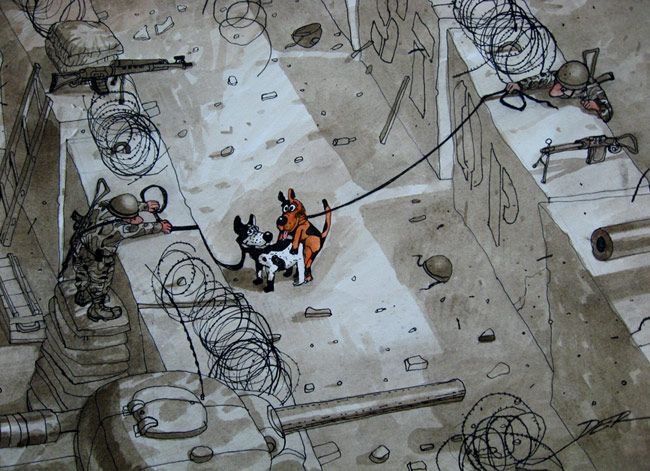 Some Canadian political cartoonists have followings outside the country. Here are two satirical artists whose audiences reach beyond Canada’s shores.

In Oleg Dergachov’s world, two dogs copulate in the no-man’s land between warring armies, as depicted in a cartoon titled Peacemakers.

An astronaut about to enter a rocket is frisked by sour-faced security staff, as he stands before a metal detector.

Robinson Crusoe puzzles over a discarded McDonald’s cup on a beach. 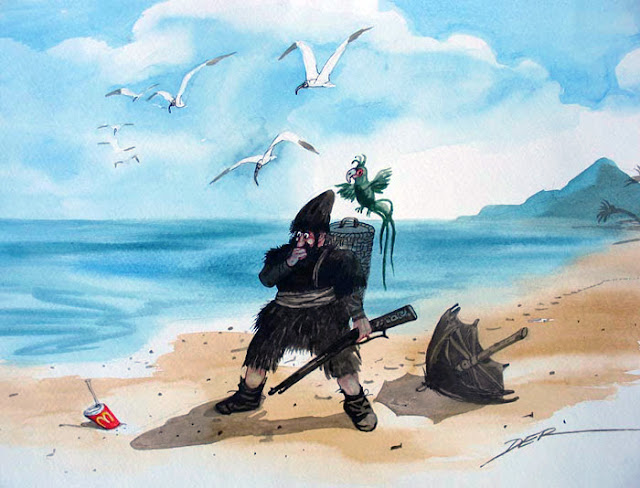 A patient stares aghast at surgical instruments laid out in a self-service operating theatre.

In a tiled men’s room, a carpeted staircase leads up to a gold-plated urinal. 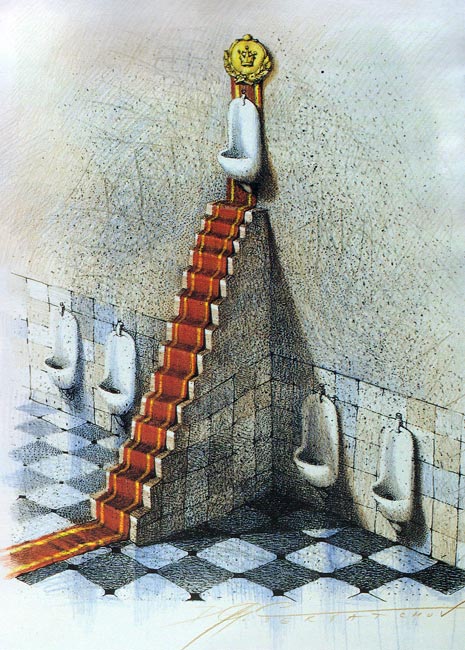 People hesitate at the entrance to a baffling maze, as a pen in an artist’s giant hand enlarges the labyrinth.

Dergachov just might be the best political cartoonist most of his fellow Montrealers have never heard of.

The recipient of more than 66 international awards, he has a worldwide following for the exquisitely crafted, Kafkaesque yet poignantly human satirical illustrations he creates in his Ville Émard studio.

Yet in his adopted hometown, few people have seen his work.

“I look at the world with a sense of humour and irony,” says Dergachov, 50, who was born in Russia and immigrated to Canada with his family in 2005.

The prolific painter, sculptor and draftsman creates cartoons, illustrations and book covers for publishers, magazines and cartooning websites in Russia, Germany, Australia and other countries.

It’s not a princely living, but he has no complaints.

Dergachov started penning cartoons at age 6, earning the wrath of some of the teachers whose likenesses he captured. Children’s unfettered imagination is a major theme in his work.

In one cartoon, a group of men and a boy watch a bird in flight; the men imagine eating the roasted bird, while the boy imagines the possibility of human flight. In another, a little boy spears a breakfast sausage, imagining himself as St. George slaying the dragon.

His mind constantly abuzz with new ideas, Dergachov is currently working on plans for a bronze monument to the human smile – a symbol of “Montreal as a humour capital,” he says. He is hoping to raise funds for the project from the city or private donors.

In the village east of Kingston where David Parkins plies his trade as a political cartoonist and illustrator, most of his neighbours have never heard of the Guardian, let alone read it.

But that doesn’t bother Parkins, 56, who moved to Lansdowne, Ont., from Lincoln, England, six years ago with his wife and children.

“It just occurred to us we could do this anywhere,” said Parkins, whose work has been compared to that of the great British cartoonist Ronald Searle.

He continues to create cartoons and illustrations for major British publications like the Guardian, the Economist and Nature, along with Canadian clients including the Globe and Mail.

The lack of local recognition doesn’t concern Parkins, who chose eastern Ontario because of proximity to publishing and media outlets in Toronto.

“It doesn’t bother me in the slightest. They’re salt of the earth. They call a spade a spade and dig with them,” he said of his neighbours.

Parkins cut his teeth drawing the character Dennis the Menace in The Beano, a popular British children’s comic.

Some of his favourite cartoons are based on classical paintings, like The Nightmare, a 1781 oil painting by Henry Fuseli. 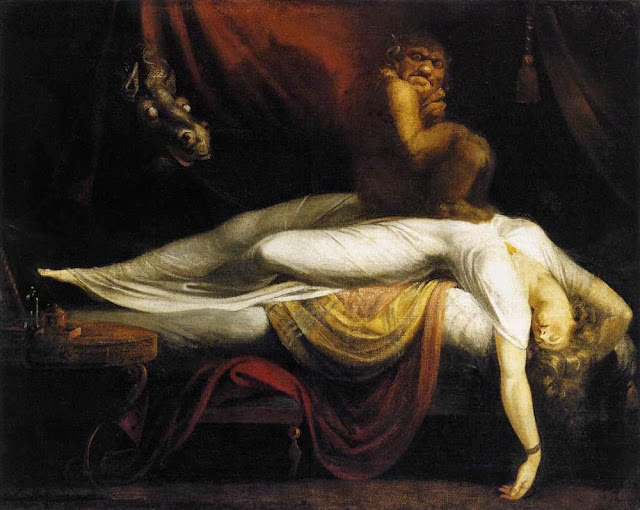 The painting depicts a dreaming woman whose nightmare is personified as an incubus sitting on her.

In Parkins’s version, exhibited in the Tate Britain museum, the dreamer is former prime minister Tony Blair and the incubus is Abu Hamza, a Muslim cleric whose London mosque was revealed to be a recruiting ground for terrorists. 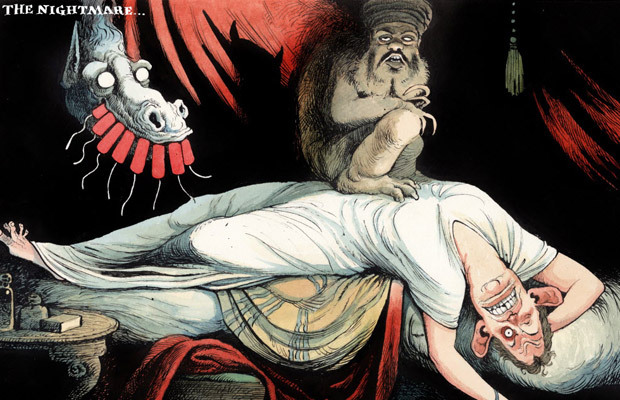 Political cartooning is thriving in Canada, Parkins observes. “There are more cartoonists in Canada than there are in the U.K. Given the U.K. has twice the population, it’s unusual,” he says.

But Canadian cartoonists lack the bluntness and mordant humour of British counterparts like the Guardian’s Steve Bell, who portrays Prime Minister David Cameron with a head like a condom, Parkins says.

“I don’t think it’s the type of stuff that would go down in Canada.

“Everybody in Canada is clever but inoffensive – he said inoffensively,” Parkins quips. 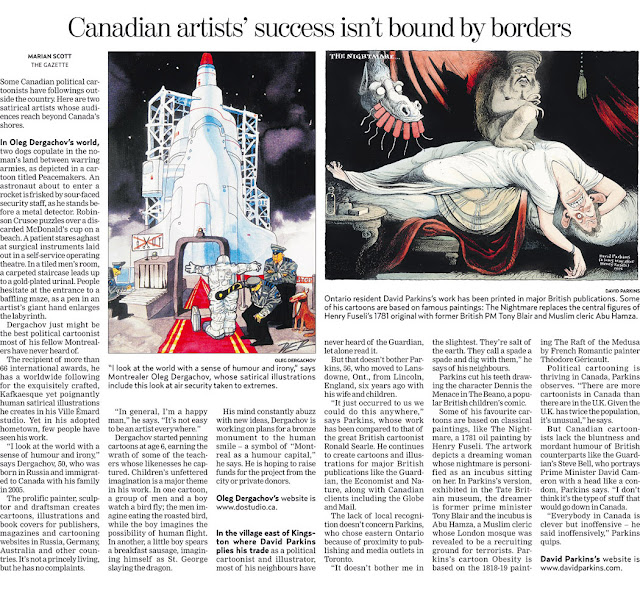 "Editorial cartoonists are artists who cut through political bafflegab, says Quebec prof" in Canada.com
Published by Bado at 4:00 AM