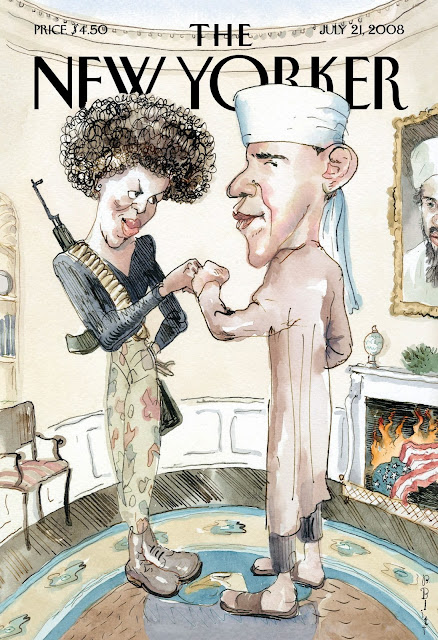 Barry Blitt’s cover of the July 21, 2008, issue of The New Yorker, entitled “The Politics of Fear,” sought to satirize the many rumors that had been circulating about presidential candidate Barack Obama and his wife, Michelle.

As David Remnick, the editor of The New Yorker, put it in a statement at the time, “Our cover ‘The Politics of Fear’ combines a number of fantastical images about the Obamas and shows them for the obvious distortions they are. The burning flag, the nationalist-radical and Islamic outfits, the fist-bump, the portrait on the wall—all of them echo one attack or another. Satire is part of what we do, and it is meant to bring things out into the open, to hold up a mirror to prejudice, the hateful, and the absurd. And that’s the spirit of this cover.”

The cover inspired a fierce debate about the nature and effectiveness of satire, but it is worth noting that the stereotypes depicted in Blitt’s drawing were rarely levied against the Obamas from that point forward, and soon faded from prominence in the national political conversation. 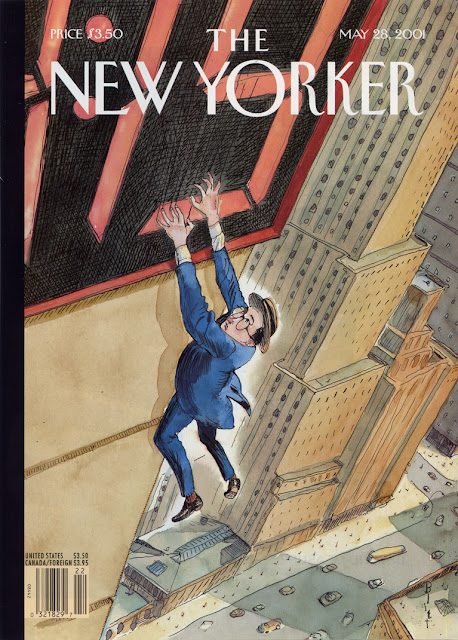 A 2010 interview with Barry Blitt by Wendy Carlson in Townvibe. 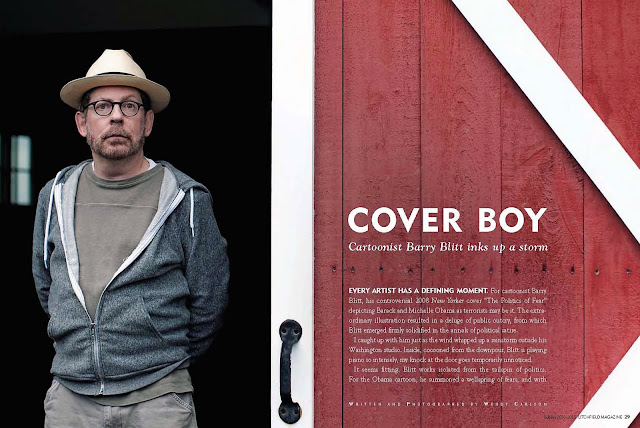 Every artist has a defining moment. For cartoonist Barry Blitt, his controversial 2008 New Yorker cover “The Politics of Fear” depicting Barack and Michelle Obama as terrorists may be it. The extra­ordinary illustration resulted in a deluge of public outcry, from which Blitt emerged firmly solidified in the annals of political satire.


I caught up with him just as the wind whipped up a rainstorm outside his Washington studio. Inside, cocooned from the downpour, Blitt is playing piano so intensely, my knock at the door goes temporarily unnoticed.


It seems fitting. Blitt works isolated from the tailspin of politics. For the Obama cartoon, he summoned a wellspring of fears, and with fly-swatter swiftness, nailed it in a single graphic that combined humor, brilliance, and art. Sometimes, as with that cover, he cuts unsparingly to the bone. “I have no boundaries, I do anything at anyone’s expense,” Blitt says jokingly, or perhaps not. It’s hard to know precisely whether he’s being cynical or sincere.


Blitt himself is visibly ill at ease under the spotlight. He shoots me a deer-caught-in-the-headlights look from under his hat. “Is this almost over?” he asks before we’ve even begun.


And so we bounce between sincerity and sarcasm—mostly the latter. I ask him about being Canadian. “I do have a green card, if you need to see it. I mean if that’s what you’re here for. I can produce all the necessary paperwork,” he replies.


Growing up in Montreal, Blitt was known as the student who drew in class. “I was a sweet kid. I drew cartoons and creatures, mostly of baseball players, Popeye, teachers, friends. I didn’t draw anything vulgar like the Obama stuff,” he says.


It wasn’t until after graduating from the Ontario College of Art and Design in Toronto that Blitt first started drawing political cartoons for Toronto Magazine. Soon, he was contributing to American magazines such as Rolling Stone. When Sports Illustrated hired his wife, Teresa, as a designer, the couple relocated to New York City, where Blitt enjoyed a ten-year stint drawing half-page celebrity cartoons for Entertainment Weekly.


Flash forward ten years and suddenly politics had become pop culture, says Blitt. “It wasn’t that way when I was growing up, but maybe with the advent of the Internet, it just seemed like a lot of other people were finding politics as crass as I did,” he says.

These days Blitt keeps up with current affairs online. The challenge for cartoonists today is that “satire is everywhere; you come up with ideas and someone’s done them. ‘The Daily Show’ and ‘The Colbert Report,’ these guys are doing it every day,” he says.


Perhaps, for that reason, his work tends to be more provocative. “Like the cartoon of Hillary Clinton and Barack Obama together in bed,” he says. “It was during the campaign when Clinton asked who’d you want to answer the red phone,” and the two are looking nervously at each other as the red phone on the bedside table rings. Of course, after this past November’s election, Blitt revisited “The Politics of Fear” cover with another New Yorker cover, this one of Obama and a fist-pumping John Boehner, the likely Speaker of the House.


There is, I discover, another side to Blitt. He illustrates children’s picture books. He recently completed The Adventures of Mark Twain by Huckleberry Finn (Simon & Schuster), a biography by Robert Burleigh due out in March. He also illustrates Frank Rich’s op-ed column in the New York Times.


Every Wednesday afternoon, Rich emails Blitt a one-paragraph description of where his column is going. “Out of that, he spins a biting, original, often hilarious and, when the subject warrants, a moving or chilling illustration every week,” Rich explained. “It’s a long-distance collaboration—me in New York City, Barry in Connecticut—but one of the most satisfying I’ve had in my career.”

Do you draw the best Obama ears? I ask Blitt. “Oh, I don’t know,” he demurs. “Obama’s so easy to draw. The brow, the shape of his head, but the ears help. I think maybe we elect people who are easy to draw. Bush was, so was Clinton.”

This he says as he doodles what appears to be a caricature of me looking frighteningly like President Nixon. I remark on the similarity. He retorts, “Not really … well I guess you do have the same Neanderthal influences.” 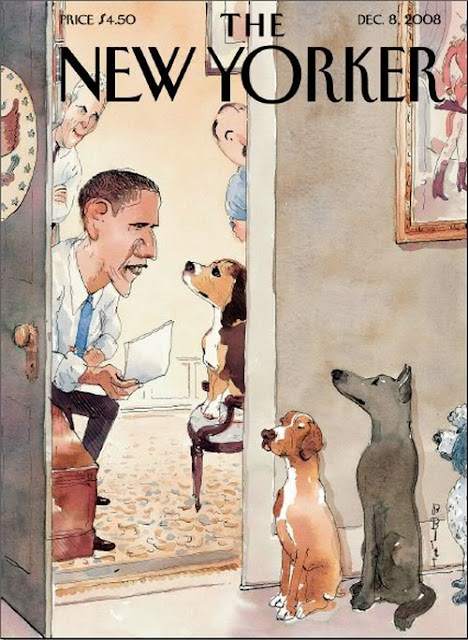 I try not to take it personally. If the Obamas can take a joke, so can I. The President chose one of Blitt’s New Yorker covers to hang in the White House. “The one when he was picking the family dog at the same time he was vetting candidates for his national security cabinet,” Blitt says. The White House also requested a signed copy of a New Yorker cartoon of Obama walking on water. On it, Blitt wrote: “Stay dry.”

During our conversation, Blitt fields emails from editors and dodges impending deadlines with apparent nonchalance. “I spend a lot of days doing nothing. Some days I’m just fever-pitched and crazy working, and other days I just lie around doing nothing.”

Today appears to be one of the latter. “Now that I’m a professional illustrator, drawing’s no fun anymore,” he says. “I enjoy playing the piano and animal husbandry. Just kidding. I don’t even know what that is.
“Anyway, are we done yet?”