From the Center for the Study of Political Graphics blog. 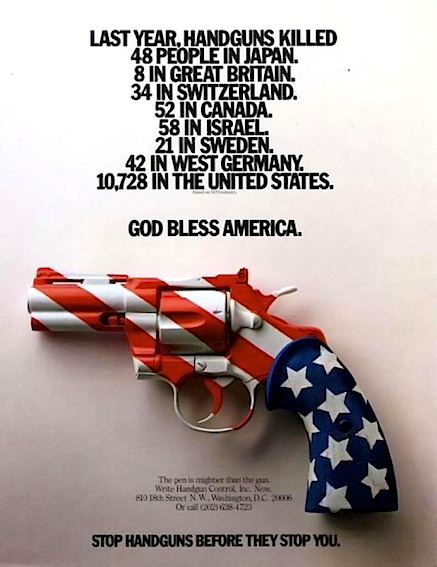 CSPG’s Poster of the Week was produced 25 years ago, yet it is painfully appropriate to commemorate last week’s massacre in Colorado and last year’s massacre in Norway.
Although the statistics are more than 20 years old and out-of-date, no poster could, unfortunately, be more relevant.

Ever since 12 people were murdered and 58 wounded in Aurora, Colorado last Friday, July 20, at the midnight showing of the latest Batman film, the media has been filled with the astounding quantity of weapons and ammunition the alleged shooter was able to obtain through the internet. Yet the issue of gun control has not been raised by either President Obama or challenger Mitt Romney.

In an editorial published July 24, David Horsey, Pulitzer Prize-winning editorial cartoonist and columnist from Seattle, discusses why, “Despite Colorado theater massacre, a discussion of guns is off limits.” He concludes his column with, “Why do conservatives not want to have that discussion now? I'll tell you why: Because they have let the most extreme elements of the gun-rights community dictate gun policy for the entire country and now they are afraid to cross them. For conservatives, this is not the time for a discussion about guns because, no matter how much blood is spilled, even in preventable circumstances, it is a discussion they never plan to have.”

The Colorado tragedy comes almost a year to the day of the anniversary of the Norwegian tragedy. On July 22, 2011, a 33-year-old far-right fanatic bombed the government district in Oslo, killing eight, followed by shooting rampage that left 69 dead at the left-wing Labor Party's youth camp on Utoya island. He was opposed to Norway’s inclusive multiculturalism, so attacked the future leaders of the Norwegian left.

Two other massacres that took place in the U.S. since this poster was produced:

April 20, 1999 -The Columbine High School massacre, Columbine, Colorado. Two senior students, embarked on a shooting spree in which a total of 12 students and 1 teacher were murdered and 21 students were injured 21.

When will we ever learn.