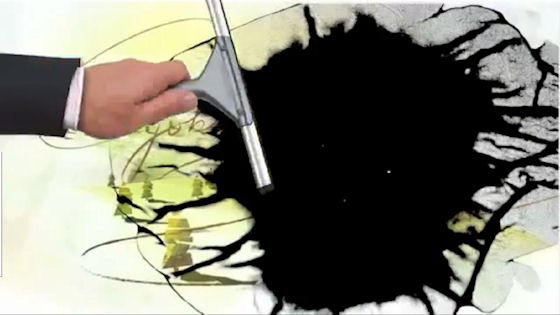 A funny thing happened on the way to Montreal. A few days before I arrived for a convention of the Association of Canadian Editorial Cartoonists, an Enbridge parody video by Province cartoonist Dan Murphy was pulled from the paper’s website. By the time my flight landed, the fecal matter hadn’t just hit the fan. It had blown apart the blades and smashed right through the editorial/advertising firewall. Over the next few days the story went global, with reports in the Montreal Gazette, the Guardian, and the New York Times.

After an oil break at an Enbridge pipeline in Alberta, Murphy captured scenes from a current Enbridge TV advertisement portraying a pastel-coloured, petroleum-based paradise in British Columbia. In the cartoonist’s adaptation, Murphy’s voiceover expresses confusion as the scenes are repeatedly swamped by spills of animated oil.

As of July 4, the original Enbridge advertisement, posted by the company to YouTube, had 2,140 visits. The Province cartoonist’s parody, still up on YouTube, had 48,875 visits. For the pipeline company this wasn’t so much public relations as Pyrrhic relations.

I contacted Murphy’s boss, editor-in-chief Wayne Moriarty, to track the censorship timeline. “You really know how to mess with a guy’s holidays,” his email begins. An unidentified editor approved the parody, he says, while Moriarty himself was “solely responsible for having it pulled from the site,” although it was another editor who actually went online to delete it.

Moriarty earlier told the New York Times that he reviewed the animation after being contacted by the newspaper’s advertising sales department. The message coming down the food chain was that the animation was “a misappropriation” of the pipeline company’s advertisement. The paper even contacted Enbridge to apologize, according to the report.

For his part, Murphy says he was called into a meeting with Moriarty and editorial page editor Gordon Clark. The boss told him Enbridge was very unhappy and that if the ad wasn’t taken down, the company was going to pull its ads from the paper, and he (Moriarty) could lose his job. The cartoonist went to the media after what he saw as a clear violation of the distinction between editorial and advertising. He told the CBC that speaking out has been his toughest decision in 25 years at the paper.

To be fair to the Province editor-in-chief, he was in a tight spot without much room to manoeuvre. As for the staff cartoonist, his heavy use of the pipeline company’s material in his animation may well be protected under the “fair dealing” provision of Canadian copyright law. Fair dealing is the Commonwealth equivalent of U.S.-style “fair use,” in which copyrighted materials can be used or modified for the purposes of social interest. Signed into law on June 29, Bill C-11 states: “Fair dealing for the purpose of research, private study, education, parody or satire does not infringe copyright.”

Enbridge is free to spread or withdraw their advertising dollars wherever and whenever they see fit. Like all columnists and political cartoonists, my paycheque is supported by ad revenue. I support free enterprise and small businesses. Yet when a single, controversial source targets the local media with a $5 million advertising blitz, that’s another story. Mark Twain said it best: “It’s difficult to get a man to understand something if his salary depends upon his not understanding it.”

Last Saturday at an ACEC luncheon in Montreal, former prime minister Paul Martin spoke about the importance of political cartoonists and their work. “You people have the ability to reach Canadians in a way no one else does ... with your talent to draw and to make a point,” he told the audience. As he spoke, a statement about the cartoonists’ absent colleague circulated from table to table. The statement read: “We, the undersigned, members of the Association of Canadian Editorial Cartoonists, support Dan Murphy in the current controversy over the flash animation pulled from the website of the Vancouver Province. Murphy’s work, we are proud to say, regularly speaks truth to power with great wit and artistic flair. His work is a shining example of the freedom of expression we enjoy in Canada. He has demonstrated bravery in coming forward to explain, from his perspective, why the animation was spiked after publication.”

Forty editorial cartoonists from across Canada signed the statement.


© Copyright (c) Vancouver Courier
Published by Bado at 4:00 AM