The Toronto Star apologizes for a de Adder editorial cartoon 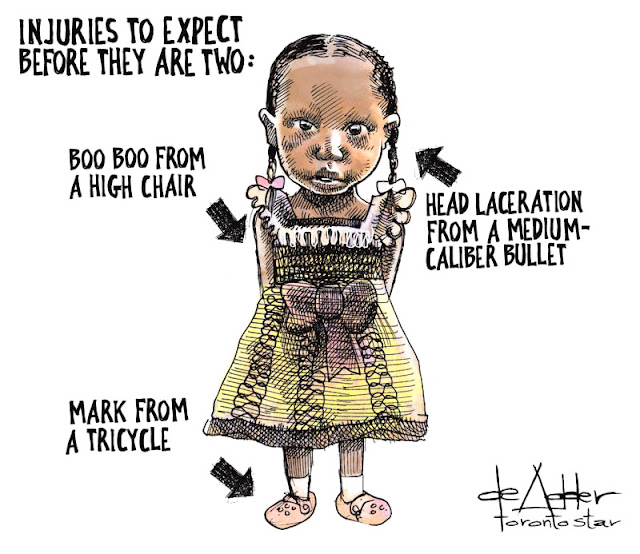 Cartoons often evoke strong reactions, and Michael de Adder’s cartoon on Wednesday’s editorial page was no exception. In the wake of the Scarborough shooting, de Adder drew an image of a young girl with the caption “Injuries to expect before they are two,” with a “boo boo” from a high chair as well as an injury from a bullet.
Quite a few readers found the cartoon, coming right after the Scarborough incident, very upsetting. Some told us in letters to the editor, emails and phone calls that by portraying the child as identifiably black and using the word “they,” it fed into racial stereotypes at a time when emotions were running particularly high. Some even thought it was making light of the shooting, as though subjecting a 22-month-old child to this kind of violence (as happened in Scarborough) isn’t serious.
That was the last thing that de Adder, and the Star, intended to convey. In hindsight, though, we should have been more aware that the cartoon could be read in a way that would reinforce stereotypes.
The intended point of the cartoon was to say how unacceptable it is for a child – any child – to face such an injury along with the routine bruises that come with growing up. The word “they” was intended to refer to children, but it could easily be taken as a reference to black people in general. Certainly, a considerable number of thoughtful readers interpreted it that way.
On his website, de Adder says: “When there’s tragedy like this, drawing a cartoon is very difficult. You don’t intend to offend anybody. You intend to make people pause or maybe think.” In this case we didn’t do a good enough job in trying to make people think while avoiding stereotypes and misunderstanding. We are sorry.


A complete breakdown of the Toronto Star cartoon from start to finish:


July 21st, 2012: Whether you like the cartoon or hate the cartoon, this is step by step how I ended up drawing my now infamous Toronto Star cartoon of July 18th.

Before every deadline I start with this:


A blank sheet of paper.

The big news on July 17th was the Scarborough shooting. I knew it would be hard to tackle, it's a sensitive issue.

I wanted to make a strong point. I am an opinion writer. But I wanted an idea that was sensitive to readers affected by this tragedy. Honestly that was very important to me.

Many things affected me about this tragedy, but the bullet injury to the 22-month old girl struck a cord. I have kids. The worst thing they ever suffered was a scrape to the knee. I thought about this.

A 22-month old should have injuries from boo boos or scrapes, not gunshot wounds.

That's an idea, I thought. That's a good idea.

I drew an outline.


There are those famous books "What To Expect : The SecondYear." That's loosely where "injuries to expect before children are two" came from.

In the early reporting of the shooting, the 22-month old wasn't identified as female or male. In the original cartoon I drew a male toddler not a female toddler. I also had "laceration from a 9mm glock" as the finale injury. 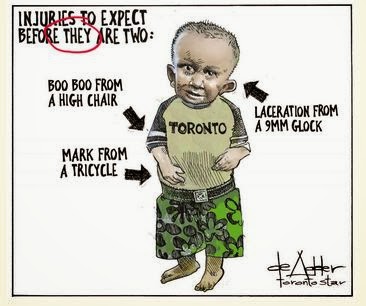 The next step I painted my drawing:


Then I made my big mistake, one that I'll regret the rest of my life. I changed the word "children" to "they" because it looked better visually. And also, to me, it fit the flavour of the parenting books "What To Expect."

Completely unaware of what I had done to my message, I kept going.

It was about the same time I finished drawing a male toddler that the media anounced that it was in fact a girl toddler who was injured. I'd have to turn the figure into a girl. At the same time somebody also pointed out that I can't use "9mm glock" when the weapon that injured her was not reported.

With the deadline approaching, I had one hour to turn the 22-month old into a girl. And change the final caption to "head laceration from a medium-caliber bullet." The final edit was to move "mark from a tricycle" down to her ankle.

That's how I ended up with the now famous cartoon in the Toronto Star. If I could go back in time and stop me from changing "children" to "they" I would. But if I could do that I'd probably stop me from drawing the cartoon at all.