Telnaes has been intrigued by how apps could allow cartoonists to approach
editorial cartoons in new ways. “In print, users are passive – meaning
that editors determine what they see.” She adds “Online, readers have
more content choice but it’s still a passive experience. With apps, the
evolution of the relationship between users and cartoons takes a big step
forward due to the potential for interactive and non-linear content.”
Telnaes created 24 original animation sequences for POTUS Pick. Users
experience and navigate among the sequences using a combination of
touching, dragging and shaking their devices. Telnaes notes that “the
number of ways a user may proceed through the app cartoon is greater than
the number of Romney gaffes.”

The app was produced with The Cartoonists Group. The app has links to more than 1,000 election-related cartoons from The Cartoonist Group and a searchable database for reprints of comic strips and editorial cartoons by 50+ leading cartoonists.
The app costs $.99.


Ann Telnaes wants to change the game on how readers interact with their political cartoons.

Toward that end, with the presidential debate season upon us, Telnaes now lets the viewer pick Obama or Romney in a whole new way.

Telnaes and creative partner Sara Thaves have just introduced “POTUS Pick,” an iPhone and iPad app that allows the player to navigate through 24 original animation sequences as Romney and Obama speak (yes, those are their real voices), move and — in the case of both candidates — dramatically “flip-flop.”
We’ve always talked back and forth about the cartooning profession and bounced ideas off one another, especially about the possibilities for cartoons online,” says Telnaes, The Washington Post’s Pulitzer-winning political animator, about collaborating with Thaves.

“Ann and I had been talking about an app in an abstract way for a long time, in app-time that is ... probably over a year or so,” Thaves, the daughter of “Frank and Ernest” creator Bob Thaves, tells Comic Riffs. “I have had a long-standing interest in how cartoons and comics can be adapted to new media and technologies.”

Telnaes and Thaves believe that reading a static cartoon, or even viewing an online cartoon, can be a passive experience.

“We have described ‘POTUS Pick’ as an ‘app cartoon’ as opposed to a ‘cartoon app.’ “ Thaves says. “And I like to think that it is actually an ‘app cartoon-plus.’ As an app cartoon, ‘POTUS Pick’ doesn’t distribute content from other environments. ... It is all-new content developed to exploit all of the different interactive and nonlinear attributes of the app environment. In this way, ‘POTUS Pick’ moves editorial cartoons into a new environment.”

The cartoonists’ passion for this evolution would prove crucial, because the process presented plenty of challenges.

“I think we can safely say the approval process didn’t go very smoothly, although it wasn’t the same issue as Fiore’s,” says the left-leaning Telnaus, alluding to Bay Area-based political animator Mark Fiore, who was able to overcome Apple’s intitial rejection of his app after he won the editorial cartooning Pulitzer in 2010. “Sara and I definitely learned a great deal about the process -- not just about Apple but about app developers.”

“Wow, [the Apple Store] may have been the biggest piece of learning to come out of the process,” Thaves tells Comic Riffs. “As you may know, Apple is the gatekeeper to the iTunes Store. Nothing, nada, zip is distributed there unless it has been approved by Apple. ... We knew all this before we started and none of the folks who worked with us to develop the app expected any problems getting the app approved. Well, the only word that matters on this is Apple’s. We learned the hard way that Apple’s approval standards are — in the words of a colleague of ours — ‘opaque.’ The sense we got is that Apple’s standards are tough to discern at any given time, and they also change over time.

“In our case,” Thaves continues, “ ‘POTUS Pick’ was rejected twice, and we were down to our final appeal before finally being approved. To this day, we’re not entirely sure what the reason for rejection — or acceptance — was.”

Thaves is also the founder of the Cartoonist Group, who manages the reuse of many cartoonists’ work. She emphasizes that this “app cartoon-plus” also allows buyers to access that group.

“ ‘POTUS Pick’ represents something new for editorial cartoons, and supports the Cartoonist Group’s core business while doing so.” 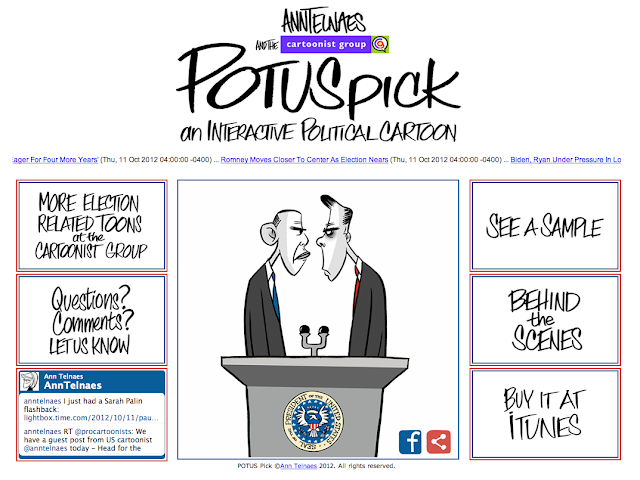