"The Lost Art of Heinrich Kley"

The Lost Art of Heinrich Kley Volumes One & Two collect over 450 drawings and paintings from a wide array of sources. Neither volume overlaps with past books on Kley, as nearly none of these drawings have been collected and reprinted since their original publication a century or more ago. Both volumes also provide groundbreaking scholarship on Kley’s life and work by German art historian Alexander Kunkel—whose recent research is presented in these volumes for the first time in English—along with incisive appreciations by contemporary artists Michael Wm. Kalutaand Jesse Hamm. 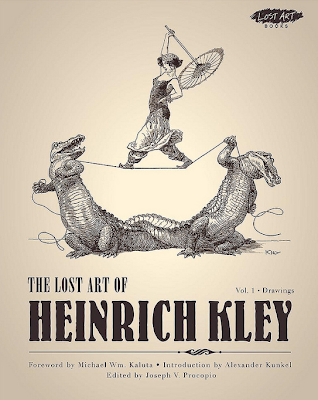 Volume One focuses on Kley’s ink drawings, and reprints for the first time a substantial selection of his illustration work for children’s books and adult genre fiction, a side of Kley’s career previously unexplored in other collections. This volume also includes a wide sampling of Kley’s cartoons and magazine work, with newly collected examples taken directly from a variety of rare sources such as Jugend, Simplicissimus, and the historic Der Orchideengarten (the world’s first fantasy fiction magazine). In all, over 300 Kley illustrations and cartoons fill this first volume. 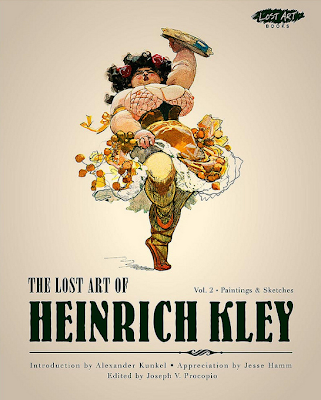 Volume Two also breaks new ground by being the first book to present a large number of Kley’s paintings and preparatory drawings, some reproduced directly from the original art. These color works reveal a heretofore rarely glimpsed pool of talent, and expand on the subject matter traditionally associated with the artist by including examples of his landscapes and industrial paintings. This volume’s preparatory drawings are culled from the Library of Congress’ untapped Kley archive, and show the artist working out concepts for book illustrations, reworking ink drawings into color paintings, and doodling for his own amusement. Approximately 150 drawings, many in color, appear in this volume.

To reward our loyal readers, we are offering these volumes on Heinrich Kley at a temporarily discounted price exclusively through our website’s store through December 31, 2012. In 2013, both volumes will also be made available through other distribution channels at their full retail price.

If you’ve encountered Heinrich Kley’s work, it has undoubtedly left an impression. Nobody mistakes a Kley drawing for that of another artist’s, and his fervent, humorous line work has inspired generations of animators, illustrators, and cartoonists around the world since originally appearing in German books and periodicals a century ago.

Born in Karlsruhe in 1863 to a silversmith, Kley knew from a young age that he wanted to be an artist, and though his early education adeptly prepared him for that life, it wasn’t until Kley was nearly 40 years old that he began to publish the drawings that would cement his legacy as one of the greatest draftsman of his day. Much of Kley’s early career was spent trying to establish a niche for himself as a painter of landscapes and industrial settings.

That changed when a visiting friend happened upon some drawings in Kley’s studio that he had produced for his wife’s amusement, and he urged Kley to submit them to Jugend, Simplicissimus, and other popular weeklies.

Enthusiastically received, Kley’s work would appear in these magazines on and off for the rest of his life. In fact, the drawings were popular enough that, over the years, the magazine’s publishers collected them into four separate “albums” (large hardcover volumes).

It was almost certainly one of these albums that made its way into the hands of Walt Disney and his famous coterie of early animators, with Albert Hurter (1883-1942), Joe Grant (1908-2005), and Gustaf Tenggren (1896-1970) all expressing deep admiration for Kley’s work.

In fact, Disney himself held up a book of Kley’s drawings during a television appearance and said that they were integral to the studio’s lessons and workshops for newly hired animators.

Even casual perusal shows Kley’s stamp on movies like Fantasia, Dumbo, and The Jungle Book.

The fanciful, sometimes edgy subject matter of Kley’s drawings in combination with a paucity of biographical information led to wild speculations regarding the artist and his life. One American magazine, which ran several of his drawings in the 1930s without Kley’s knowledge or consent, proclaimed that he had died years earlier in an insane asylum.

The reality, however, was quite a bit more prosaic. Kley actually lived a mostly quiet, urbane life until his passing in 1945. The Dionysian excesses of some of his drawings do not seem to be matched by a bohemian personal life.

But outward appearances aside, there is no denying that the images which flowed from Kley’s pen offer a glimpse into a fantastic, often riotous inner life that has thrilled and delighted his admirers for decades.

Surprisingly, for an artist so influential and esteemed, there has not been a new U.S. edition devoted to Kley’s work in 50 years. Such an oversight demanded redress, inspiring me to undertake what turned into a several year quest to gather as much previously uncollected Kley material as I could find and present between two covers. An abundance of wonderful discoveries later, and two covers turned into four.

These color works reveal a heretofore rarely glimpsed side to Kley’s talents and expand on the subject matter traditionally associated with the artist by including examples of his landscapes and industrial paintings. This volume’s preparatory drawings are culled from the untapped Kley archive of the Library of Congress and show the artist working out concepts for book illustrations, reworking ink drawings into color paintings, and doodling for his own amusement. Approximately 150 drawings, many in color, appear in this volume.

So what is it that has made Kley’s art so enduring? As Michael Wm. Kaluta so aptly puts it in the foreword to Volume 1: “Like all great things, Kley’s work gives more than one can take. The further one delves into, learns from, studies, abandons, argues with, capitulates to, embraces, and honors his work, the more one feels justified in paying even closer attention to it.”

Lost Art Books, the flagship series from Picture This Press, collects and preserves the works of illustrators and cartoonists from the first half of the 20th century. Too many of these artists have gone underappreciated for too long, with much of their work uncollected or unexamined for decades, if at all. The Lost Art Books series aims to preserve this cultural heritage by re-introducing these artists to new generations of working illustrators, historians, and admirers of things beautiful.