Where did the party animals come from?

From Philip Jackman's "Collected Wisdom" Column in the Globe and Mail. 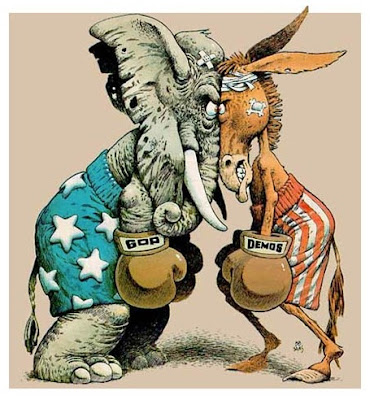 The question: Robert Findlay of Toronto asks, “How did the Republicans choose an elephant as their party symbol and the Democrats a donkey?”

The answer:
Well, they didn’t actually choose those symbols, they were given them by an editorial cartoonist named Thomas Nast.

According to William Safire in his 1968 book The New Language of Politics, it all began with a campaign by the New York Herald. The newspaper objected to the possibility of Republican Ulysses S. Grant running for a third term as president because of his “Caesarism,” or autocratic ways. “The issue was taken up by Democratic politicians in 1874, halfway through Grant’s second term and just before the midterm elections,” Mr. Safire writes, and it helped to alienate Republican voters.

Meanwhile, the Herald had perpetrated a non-political hoax known as the Central Park Menagerie Scare of 1874. It ran a totally untrue story that animals had broken out of the zoo and were terrorizing Central Park.

In the Nov. 7, 1874, issue of Harper’s Weekly, Thomas Nast put these two Herald initiatives together in a cartoon showing “an ass (symbolizing the Herald) wearing a lion’s skin (the scary prospect of Caesarism) frightening away the other animals in the forest.” One of those animals was an elephant, representing the Republican vote, “being frightened away from its normal ties” by the phony lion of Caesarism. 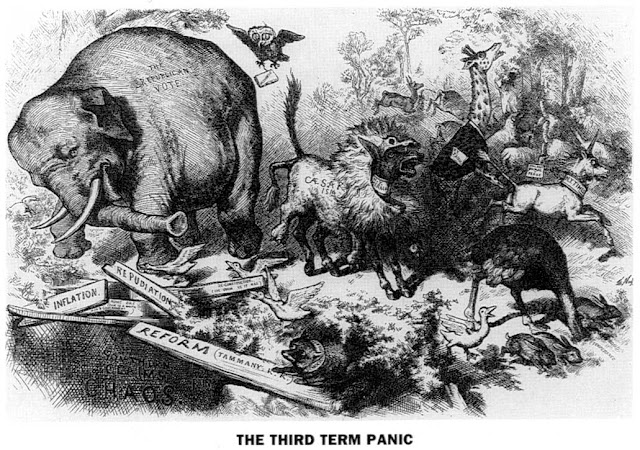 On Nov. 21, 1874, Mr. Safire says, “after the election in which the Republicans did badly, Nast followed up the idea by showing the elephant in a trap,” illustrating how the Republican vote had been driven away from its normal allegiance. “Other cartoonists picked up the symbol, and the elephant soon ceased to be the vote and became the party itself; the jackass, now referred to as a donkey, made a natural transition from representing the Herald to representing the Democratic party that had frightened the elephant.”

Collected Wisdom would add that the jackass, or donkey, had occasionally been used before 1874 in reference to the Democrats, but it was Nast’s cartoons that led to it being widely accepted as the Democrats’ political symbol.
Published by Bado at 4:00 AM