Charb's “Open Letter: On Blasphemy, Islamophobia and the True Enemies of Free Expression” 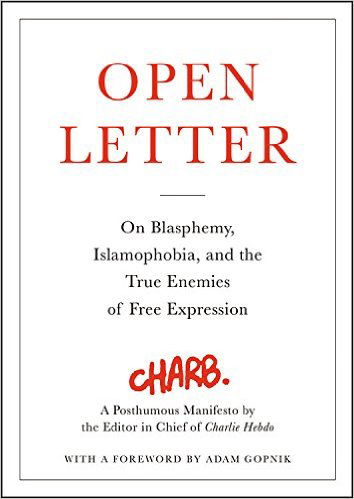 An impassioned defense of the freedom of speech, from Stephane Charbonnier, a journalist murdered for his convictions.

On January 7, 2015, two gunmen stormed the offices of the French satirical newspaper Charlie Hebdo. They took the lives of twelve men and women, but they called for one man by name: Charb.

Known by his pen name, Stephane Charbonnier was editor in chief of Charlie Hebdo,  an outspoken critic of religious fundamentalism, and a renowned political cartoonist in his own right.

In the past, he had received death threats and had even earned a place on Al Qaeda's Most Wanted List. On January 7 it seemed that Charb's enemies had finally succeeded in silencing him. But in a twist of fate befitting Charb's defiant nature, it was soon revealed that he had finished a book just two days before his murder on the very issues at the heart of the attacks: blasphemy, Islamophobia, and the necessary courage of satirists.

Here, published for the first time in English, is Charb's final work. A searing criticism of hypocrisy and racism, and a rousing, eloquent defense of free speech, Open Letter shows Charb's words to be as powerful and provocative as his art. This is an essential book about race, religion, the voice of ethnic minorities and majorities in a pluralistic society, and above all, the right to free expression and the surprising challenges being leveled at it in our fraught and dangerous time."

Michael Cavna has published an eloquent review of “Open Letter: On Blasphemy, Islamophobia and the True Enemies of Free Expression” in The Washington Post.

What Charb most often does, in ‘Open Letter,’ is wield a self-assigned moral authority as he “calls out” those he sees as guilty and complicit: the “racists” who view Muslims more as symbols than as citizens; the journalists who irresponsibly use terms like “Islamophobia” to sell papers and stir up clicks; the unmoored politicians who blow with the winds of cultural change and hate; and all critics who willfully misstate what Charlie Hebdo means and says.

Many self-interested parties benefit by peddling fear and hate and misunderstanding and mistrust, he writes — and he believes that Hebdo’s humor shines a light on these dark forces . . . ‘Open Letter’might make the reader mourn for not just the man, but also the thinker he was.

Agree or disagree with his ideas, or his intentionally offensive/provocative modes for getting them across, but Charb brought sharp insights to France’s national conversation — beliefs on which he preferred to stand rather than live on his knees.