The animated cartoon, by Pulitzer Prize winner Ann Telnaes, sketched the Texas senator in a Santa suit turning a Jack-in-the-box-style crank that made the monkeys dance. A headline said, “Ted Cruz uses his kids as political props” — a reference to a recent viral campaign video in which Cruz and his daughters spoofed familiar Christmas stories.


In a brief statement that accompanied the cartoon while it was online for several hours, Telnaes wrote that “there is an unspoken rule in editorial cartooning that a politician’s children are off-limits. … But when a politician uses his children as political props, as Ted Cruz recently did in his Christmas parody video in which his eldest daughter read (with her father’s dramatic flourish) a passage of an edited Christmas classic, then I figure they are fair game.”
Outtakes from the original ad: Ted Cruz Family Outtakes

Other articles on the same subject:
WaPo Cartoonist Depicts Cruz Kids as Monkeys. Media Blame Cruz.
Why that now-retracted Washington Post cartoon is a gift to Ted Cruz 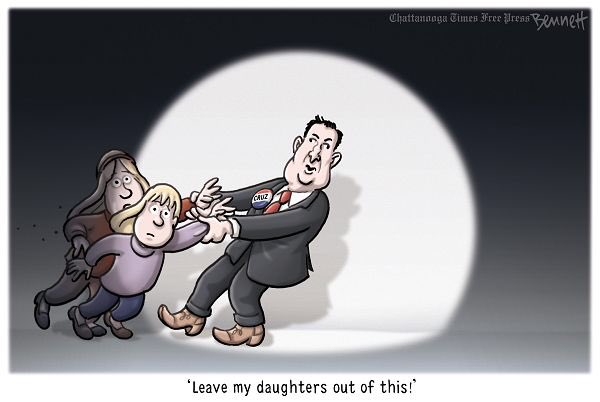 A statement from the Association of American Editorial Cartoonists:

The Association of American Editorial Cartoonists (AAEC) stands in support with Ann Telnaes and her right to call out presidential candidate Sen. Ted Cruz for politicizing his daughters in a campaign attack ad. While it would be in bad taste to arbitrarily go after a public figure's family, it is fair journalism to criticize the senator for using his own children to attack a political opponent. And that's precisely what Ann's cartoon has done. It does not stray from the time-honored tradition of cartoonists using satire to speak truth to power and protect the powerless – in this case, children.

Cruz ventured into new territory when he had his 7-year-old play an active attack role reading from a script in a campaign ad criticizing political opponents. The media should draw a distinction between this and when elected officials merely use their family in photo ops and positive campaign promotion as has historically been the custom.

Cartoons speak in metaphor, and the monkey image is integral to the age-old organ grinder symbol. Taken in full context, Cruz was clearly the target, but he and his supporters deflected the message by claiming his children were the victims. This is a technique many employ when in the crosshairs of satire, and the media must be careful not to fall for this argument hook, line, and sinker. While the editors at The Washington Post are free to edit how they see fit, in our view it would have been best to defend the cartoon once it had been published. Retracting it risks the appearance of caving to political pressure.